Basketball courts, like this one at Roadrunner Park, are available again to Phoenix residents since the city voted to reopen recreational areas on Oct. 7. (Photo by Kevin Hurley/Cronkite News) 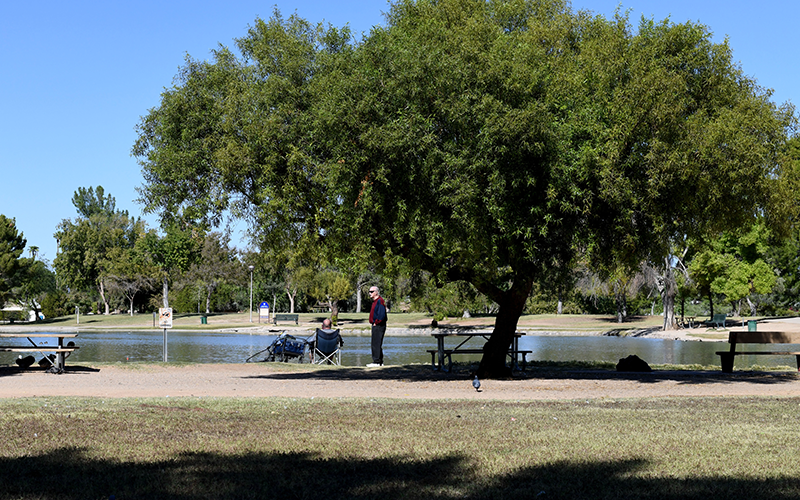 Even though parks are open, rules are still in place because of the pandemic. These include wearing a mask at all times and keeping 6 feet apart from others. (Photo by Kevin Hurley/Cronkite News)

PHOENIX – On Friday nights at Cesar Chavez Skate Park, Atlético Arizona United Latinos SC is one of the many groups seen playing soccer and enjoying the field’s recent reopening.

“It’s very important for us to be out here. I think sports in a child’s youth is very important for them both physically and mentally,” said Manuel Bonilla, who formed the Valley soccer club in 2003 and has been anticipating a safe place for his players to play ever since the COVID-19 pandemic forced area fields and parks to shutter. 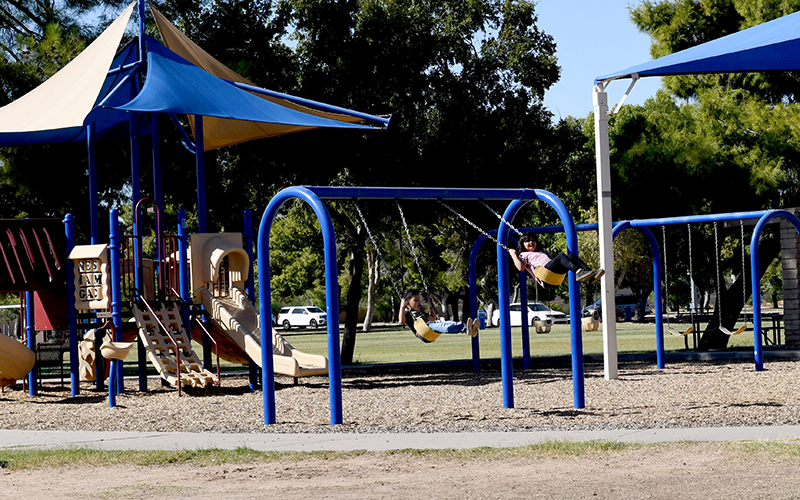 Many parents are grateful that Phoenix parks have reopened, especially for their children who are not in school yet. City of Phoenix employees are on site at most parks. (Photo by Kevin Hurley/Cronkite News)

Since the Phoenix City Council voted to reopen its athletic fields and parks on Oct. 7, residents and sports teams have begun to enjoy some of the amenities. So have animal lovers, who have returned to one of the city’s 13 off-leash dog parks.

“I think Riley had worse cabin fever than I did,” Eli Andrew, 37, said about his french bulldog mix. “Having (Steele Indian School Park Dog Park) back open has kept us both sane. And I feel safe.”

Even though scientists have said the coronavirus is less contagious outdoors, the city recommends still following safety guidelines. These include wearing a mask at all times and keeping 6 feet apart from others. City of Phoenix employees are on site to enforce the rules.

“When those fields are being used, when they’ve been reserved and there’s activities going on, we have staff who go around and monitor and help with what those organizations are doing,” said Gregg Bach, Phoenix Parks and Recreation department spokesperson.

“That’s something we did before the pandemic, but as we do it now those organizations have a designated person that they can work with on site. If there is an issue with someone not wearing a mask or some people aren’t following the guidelines, they can work with that individual person to make sure that people are following the regulations that we are requiring them to be able to reserve and use the fields.” 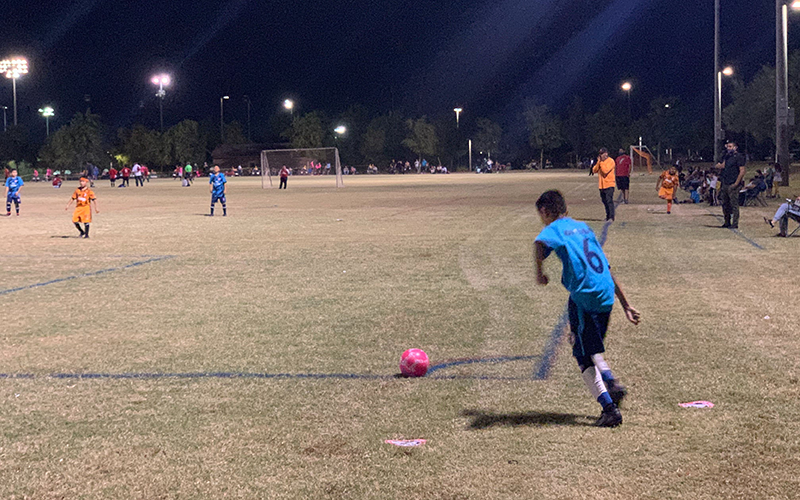 Other protocols visitors are asked to observe include bringing their own sanitizing products and limiting players on fields. Athletic fields must be reserved for training and gaming purposes three business days before usage and have a maximum of four hours usage, Bach added.

“We have different division offices throughout the city, based off where that field is that they’d like to reserve, they can work with a person in that division office,” he said. “They can call and get information from the office, then they have to come in person to reserve the space. It’s all done that way.”

Atlético Arizona United Latinos SC, said Bonilla, originally started as a safe environment for his kids to enjoy playing the game they love with their friends, but it eventually evolved into something greater.

“When my kids were younger, I wanted to create a club where they could play a sport with their friends. I’ve always believed a child in a field is a child out of the streets,” Bonilla said. “That was my mentality.

“We started growing, and we started noticing that there are a lot of kids with talent. Then we discovered that they could obtain scholarships for playing and get a free ride to college, which is why we have continued for so long.”

Atlético welcomes kids of all ages and are later divided into teams according to their age group.

“Now that we are able to play and be back out here, I feel relieved! In the sense that I can be able to move and have that energy with my friends and teammates,” said Elias Hernandez, one of Atletico Arizona’s older members.

As Valley residents try to navigate the pandemic and all its hurdles, the City of Phoenix continues to work on opening up all its park amenities for residents to enjoy.

“Our ultimate goal is we want people to be outside and be able to be physically active, but we also need for that to happen in the safest way possible for our staff and the community,” Bach said.