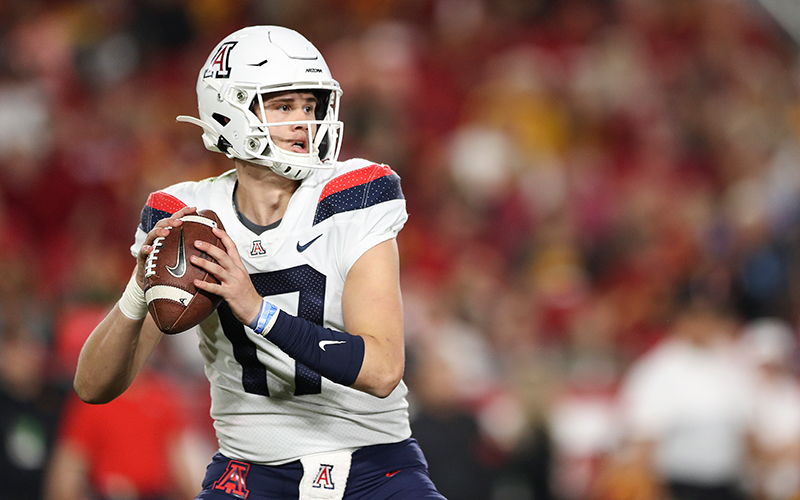 Arizona quarterback Grant Gunnell said it was “disappointing” that the Pac-12 football season was delayed but that his team remained optimistic that it would eventually resume. (Photo by Meg Oliphant/Getty Images)

PHOENIX – Saturdays on the West Coast look and feel a lot different this fall.

In a time when college communities from Tucson to Seattle, and everywhere in between, are accustomed to college football Saturdays, the COVID-19 pandemic has wiped out nearly half of the typical season. And for a time, it appeared as if there would be no Pac-12 Conference football at all.

With their season in limbo, the conference’s players were forced to watch as some of the country’s other premier leagues played actual games.

“I love football, so I kind of want to watch it, but I also get pissed off when I’m watching it because I know I should be out on the field playing the same day,” Washington State running back Max Borghi said. “No one really loves watching football if you should be out there playing.”

However, the Pac-12 finally received its reprieve in September, when the conference agreed to return and play an abbreviated seven-game schedule beginning November 7. It will mark the latest return to play for any of the Power Five conferences.

“It was disappointing at times, but as a team, we never really got down,” Arizona quarterback Grant Gunnell said. “We just kept working, hoping and believing that we were going to have a season eventually, whether that be in the fall, winter or spring.”

Because the Pac-12 was much later to return than its Power Five counterparts, the conference’s players found themselves in a unique situation with their fall camps taking place while teams in other conferences were already playing games.

“It’s definitely different,” Southern California safety Talanoa Hufanga said. “Usually, you’re ready to play in September or late August. You’re itching just to be on the field and not watching other teams.”

However, while it may be difficult for players to watch rather than play, most are trying to take advantage of the unusual circumstances presented by a pandemic.

“It’s been interesting to sit back and watch college football from a viewer’s perspective after having played it for a few seasons,” Utah wide receiver Britain Covey said. “I feel like everybody’s becoming a student of the game.” 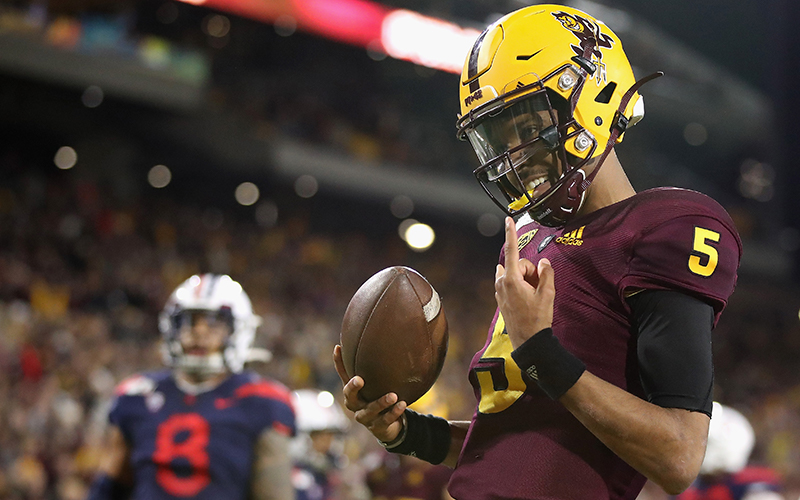 Arizona State quarterback Jayden Daniels can’t wait to celebrate after a touchdown again. He will have the opportunity again when the Sun Devils resume play on Oct. 7. (Photo by Christian Petersen/Getty Images)

Covey added that even a shortened season “with daily COVID tests, with all these protocols and restrictions,” beats the alternative of practicing and training without getting to play the games.

“In my mind, (that) is what hell would be like – just football practice with no game to look forward to,” he said.

Covey isn’t the only player that took advantage of the extra time off to learn the game more. Two-star running backs representing the Oregon schools made the most of the weeks and months they spent waiting for the season.

“This time off, I’ve been watching a lot of film by myself, trying to learn the game of football more, learning offenses and defenses and different stuff and trying to find new things that I can see,” Oregon State running back Jermar Jefferson said.

“Watching college football on a Saturday kind of hurts me a little bit, but it helps me a lot, learning the game of football. Sitting down and seeing football at home can help your game on the field when you’re playing on Saturdays. You can learn stuff from other running backs or other offenses… It’s good, and it’s bad.”

Oregon running back CJ Verdell took an approach similar to his rival’s.

“I’ve definitely been watching other teams, trying to see the things that they do and maybe even their mistakes, and just trying to use that as a learning tool to see things we shouldn’t do when we go into a game and we start playing,” Verdell said. “I’ve definitely used this time to reflect on those things.”

Given their nearly identical strategies for handling the unexpected time away from football, the battle between those Beaver State rivals should be fascinating to watch during the abbreviated season. But then it would have been even without the pandemic.

After all, Jefferson finished third in the Pac-12 in rushing in 2018, and then Verdell topped him by ranking second in 2019. They expect to be at the top of the rankings again this year.

Verdell said one of his goals for 2020 is to rush for 1,000 yards, which would be quite a feat in a seven-game season.

Players in the Pac-12 South also took advantage of their unexpected free Saturdays. For Arizona State quarterback Jayden Daniels, the delay was an opportunity to root for other sophomore quarterbacks around the country.

“Just being able to watch football, watching those college games, I’m very interested in watching the guys that are in my class: Spencer Rattler, Bo Nix, Sam Howell,” Daniels said. “Just seeing what those guys are doing so far, I’m just happy for their success and happy to see them just keep balling out.”

Daniels will be a key figure in the Pac-12’s return. As of now, the conference’s first game is scheduled for Saturday, Nov. 7, when ASU will visit USC. Fox Sports picked up the game for it’s “Big Noon Saturday” matchup beginning at 10 a.m. Arizona time.

The season-opening matchup marks the Pac-12’s first appearance in Fox Sports’ principal college football timeslot and is expected to bring major exposure to the conference, which is accustomed to playing most of its games later in the evening after much of the viewing public has stopped watching football for the day.

Hufanga was confident about USC’s ability to be ready for the kickoff at 9 a.m. local time in Los Angeles. Turns out the pandemic has prepared the Trojans for that, too.

“We wake up at 5:15 most days just to get a COVID test in at 6 a.m., so for us to be ready at 9 a.m., I can’t tell you that we haven’t been training for this for two years, three years, since we’ve been in college,” Hufanga said. “We’re going to put the ball down anywhere on the field at any time, anywhere, anyplace, so we’re just extremely excited and grateful for this opportunity.”

Still, the Pac-12’s players have about two weeks to get through on and off the field before a game day arrives, and it could be challenging for some.

“It could be (hard) for a lot of people on the team,” said Washington defensive back Elijah Molden. “You get on the college scene, and you want to have a social life. And now that’s taken away from us, but that’s our responsibility now. We’re supposed to deal with that. For some people, it’s easy. For me, it’s pretty easy just because I go home, take care of business and then come here to work. But it’s definitely a challenge.”