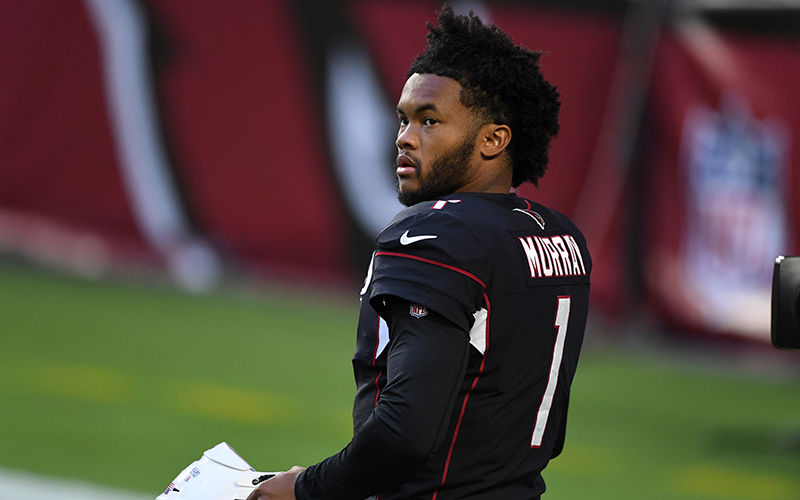 Arizona Cardinals quarterback Kyler Murray did very little standing around Sunday night against Seattle. He threw for three touchdowns and ran for another in the Cardinals’ victory. (Photo by Norm Hall/Getty Images)

PHOENIX – Kyler Murray reportedly spent $95,000 on a gemstone-encrusted pendant in the likeness of martial artist Bruce Lee in March.

While the Arizona Cardinals quarterback wasn’t wearing the pricey trinket during Sunday night’s sparkling 37-34 overtime victory against the previously unbeaten Seattle Seahawks, he produced a performance just as dazzling as his jewelry and as efficient as a Lee takedown.

In Arizona’s second primetime game in as many weeks, Murray threw for three touchdowns and ran for another, marshalling a Cardinals offense that rolled up 519 total yards in a roller coaster ride of a game against their NFC mega-rival.

Murray’s Seattle counterpart, Seahawks quarterback Russell Wilson, was also dazzling with three touchdown passes that raised his NFL-best total to 22. However, he served up three interceptions to boot, the last of which was a kill shot to the Seahawks. Arizona rookie linebacker Isaiah Simmons plucked Wilson’s pass out of the air off a disguised drop-back into coverage with just more than a minute to play in overtime, paving the way for Zane Gonzalez’s game-winning 48-yard field goal try under the cool, dark desert sky emanating through the open rooftop at State Farm Stadium.

Even without his bling, Murray shined bright – largely, because he emulated Lee’s preeminent offensive strategy: Break the opposition’s balance. Utilize every available tool. And function efficiently, at all costs.

Murray posted a 70% completion clip, nailing tight window throws time and again and kept Seattle’s defense in a bind, unafraid to shimmer with his legs. He ran 14 times for 67 yards.

“I feel like the game has definitely slowed down for him,” said Cardinals coach Kliff Kingsbury. “I do think he is picking the right moments when to take off … (and) his decision-making will continue to progress.”

Murray’s 5-yard touchdown run with three minutes to play in the third quarter was mesmerizing. He juked Seattle’s Pro Bowl linebacker K.J. Wright then froze safety Quandre Diggs in his tracks before extending the ball across the goalline.

As soon as Diggs stopped his feet, he was toast. K1 is so jittery. https://t.co/dxDa5Bskvq

Murray’s stroke of genius was on full display. But Arizona’s supporting cast, similarly, came to play.

Murray targeted the former eight times, and the sure-handed Cardinals veteran caught each and every one, averaging nearly 8 yards per reception. But none of Fitzgerald’s 62 receiving yards — his highest total this season – were as rousing as the half-dozen yards he sprinted after retrieving the ball from Edmonds, who plopped down at Seattle’s 25-yard line as the clock inched toward the end of regulation.

Fitzgerald’s heads-up effort supplied Murray the chance to spike the football in time to give Gonzalez a sweet look to hit the 44-yard field goal that forced overtime.

“I don’t think I’ve ever been a part of something like that,” said Murray, astonished by Arizona’s resiliency, particularly during the feral fifth quarter when Gonzalez missed an attempt that would have cinched the game, but instead demanded the Cardinals defense terminate consecutive Seattle possessions. “You can’t beat a good, hard-fought win like that. That’s the best type of win that can happen.”

Murray connected with Hopkins in the first quarter on a 35-yard end zone heave, initiating Arizona’s rally from an early 10-0 deficit.

Hopkins’ toe-dragging swagger sparked the Cardinals offensively, and came courtesy of Murray hoodwinking the Seahawks with a look-away quick snap that worked so well that Murray could actually be spotted grinning as he targeted Hopkins down the sideline.

“Obviously, it was a great throw and a great catch by (Hopkins), but even if you don’t hit it, you kind of freak them out for the remainder of the game,” said Kingsbury, crediting the trick-play design to Ohio State.

From that moment on, Murray and Wilson traded dimes and brilliant escapes from the pocket, profusely piling up points and yards. 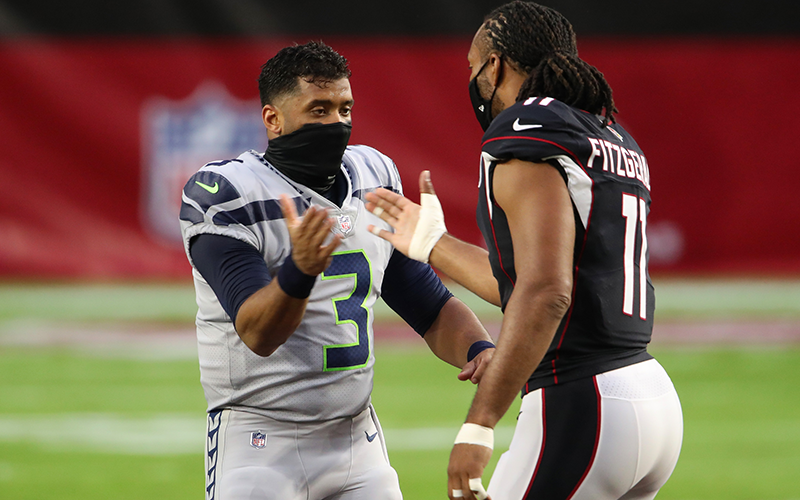 “I don’t think I smiled all game, honestly just because it felt like (I) just had to have (my) head down and keep grinding,” said Murray, evidently unaware that he flashed his grin while locating Hopkins. “For me, personally, (my) mindset was just move the ball, do what I do…be myself. Whatever I see, go with it, trust it and do it with conviction.”

Generally a change-of-pace option, Edmonds might have made the biggest statement of the evening.

The third-year, Fordham product gashed Seattle’s front-seven for 58 yards between the tackles — on top of a career-high 87 yards via checkdowns and routes out of the backfield– despite not logging a carry until late in the fourth quarter. He accounted for 56 of Arizona’s 122 total yards in its final three drives of the game, which included the series that led to Gonzalez’s game-tying field goal and the team’s pair of vengeful possessions in overtime.

“I busted my (butt) this offseason,” said Edmonds, reflecting on his timely production, especially after Kenyan Drake left the game due to an injury. “Truly, from the start, before even (COVID-19) was beginning, I just kept working every single day…working behind closed doors, and you work like that for opportunities like this.”

“It’s a testament that hard work pays off, and you never know when your time is going to come.”

Edmonds admittedly had a hunch something prodigious was on its way. 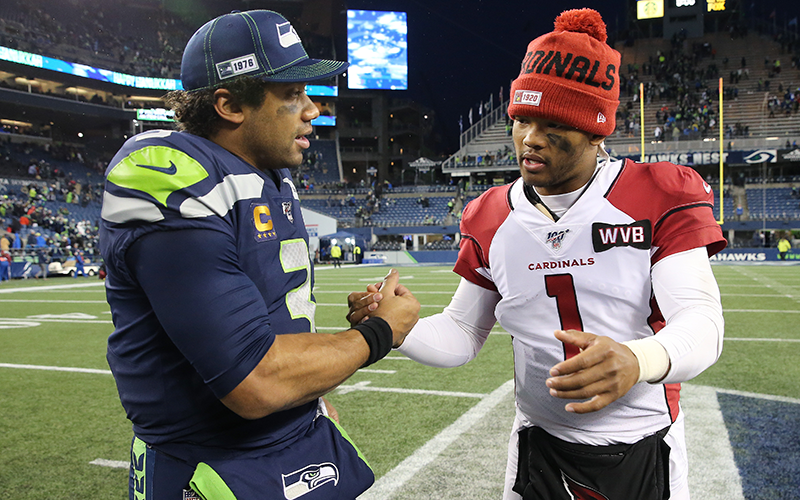 “I remember talking to (Hopkins), (Christian Kirk and) Larry before the game. I said ‘We’re going to find out what type of team we are today,'” Edmonds said. “We have some decent wins on the board and everything like that, but you know Seattle is going to be playing in January…You really find out, ‘How real are we? What are we made of?’ (There was) a lot of adversity…and we responded so well.”

Kingsbury, who actively recruited Murray during his tenure at Texas Tech before the latter signed with Texas A&M, loved his ascending quarterback’s temperament during a wild comeback affair.

“He never got too high or too low,” Kingsbury said. “(He) controlled his emotions, and stayed in the moment. We were laughing on the sideline, talking about ‘Hey it’s just another Big-12 football game out here…(he) continued to answer the bell any time.”

“(I) was really impressed by the way he carried himself.”

The pivotal, divisional victory leads the Cardinals into their bye week feeling like diamond-encrusted gold, but Kingsbury remains vigilant, knowing the shine can disappear quickly in the NFL. The Cardinals learned a painful lesson in the wake of their 2019 off-week.

“We’ve got to stay more locked in this year,” said Kingsbury, labeling last season’s post-Thanksgiving performance versus the Rams an embarrassment. “We have to, individually, take it upon ourselves to keep the focus and stay dialed in and stay on this kind of energy that we’re on right now.”

Sounds like something the late Kung Fu master Bruce Lee would say. And Kyler Murray would buy.