Ready for some football? Finally, so is Chaparral High after COVID outbreak 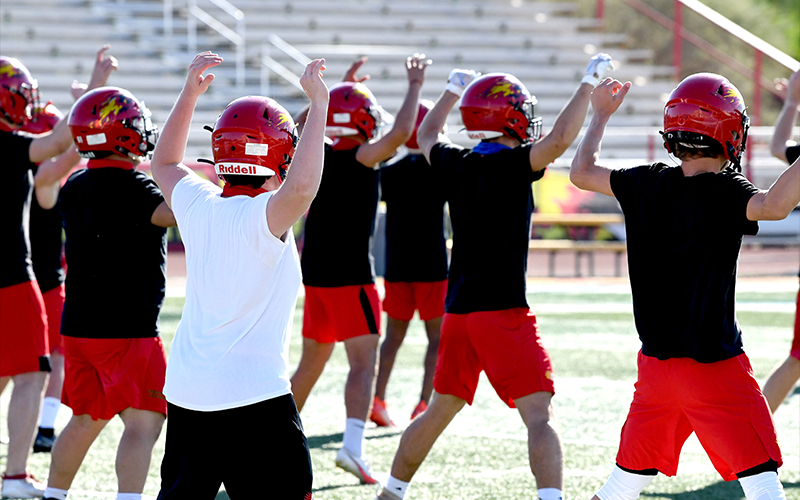 SCOTTSDALE – After its first three games were canceled because of a COVID-19 outbreak, the Chaparral High football team will finally take the field Friday in a home game against the 0-3 Brophy Prep Broncos.

Shut down for a 14-day quarantine after several players tested positive for COVID-19 two days before what was to be the team’s season opener on Oct. 2, the Firebirds were given the go-ahead from health officials to begin practicing last week. The season opener, said Chaparral coach Brent Barnes, has been a long time coming.

“We were hoping we’d start July 27, the first practice, and I think the first game was (supposed to be) on August 21,” he said. “Here we are, two months later, and we haven’t played a game yet. The anticipation for playing the game has been lingering on for a while.”

The Firebirds last season reached the Open Division playoffs and were again expected to be among the Valley’s top teams. Now Chaparral, as the only program on the Arizona Interscholastic Association timeline to not yet play a game, faces an uphill battle.

Even so, the playoffs are still a possibility. With the Centennial Wolves leading the 6A Desert Valley region at 2-1, Pinnacle at 1-1 and Liberty and Brophy Prep both below .500, a win in the season opener would immediately put the Firebirds in at least a tie for second place in the region.

With any more cancellations, the Firebirds will find themselves ineligible for the playoffs, per AIA’s requirement of playing at least five regular season games to be eligible for the postseason. 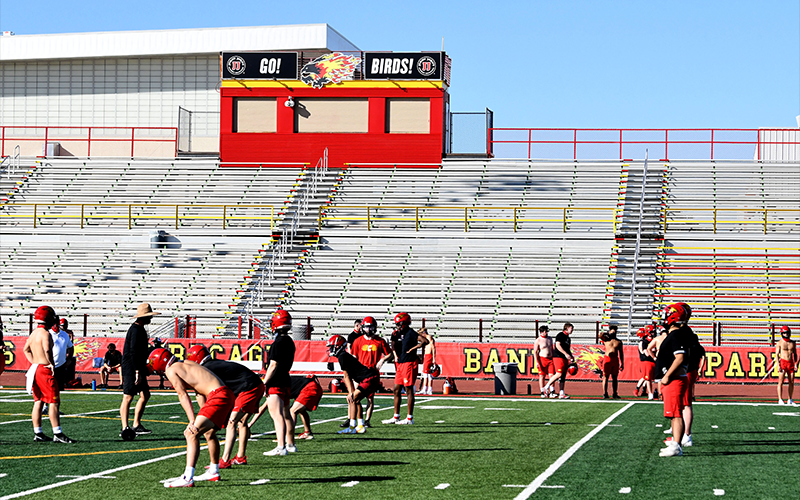 Chaparral High School players are excited to play again after having not played because of COVID-19 positive tests. (Photo by Kevin Hurley/Cronkite News)

The Firebirds program fell into this group with three or more COVID-19 cases, therefore having to shut down.

The Firebirds have made the playoffs for 23 consecutive years and are ranked No. 11 in Arizona, according to Max Preps. Barnes is more concerned about his players just being able to play and finish out the season.

“At this point, more than anything else, we want to play,” Barnes said. “Whatever happens after that, we might not have as much control, but we want to find a way to play by any way possible and give ourselves a chance if we qualify for playoffs again, which still may be difficult because of all the circumstances, and they cut the playoffs down. Only eight make it instead of 16. It is going to be a lot more difficult to get to that point.”

Barnes is making sure his players aren’t looking ahead to the playoffs before they even play their first game.

“We got a chance to play Friday and we’ve got to take care of business on Friday and then we’ll start with next week,” he said. “At this point in time, we just have to worry about what is in front of us and what we can control, we’re going to get out there on Friday and give it everything we’ve got.”

The Firebirds must shake off the rust, get up to speed with the season quickly and catch up to their 6A counterparts.

“There’s no way to ease into the season, especially at this point,” Barnes said. “We’ve done the best we could’ve, we had a live-game scrimmage on Saturday to try to prepare everybody. Other teams have now played three games. We can use that as an excuse, but bottom line is we should know what we’re doing, we should get out there and execute.”

Barnes said viewers can expect the Firebirds to play hard, execute, and if they can do that, they can come out with a win. The team outbreak has not made Barnes’ goals for his team any lower.

Firebirds senior captain Jack Whitten is just excited to get back out on the field.

“We’re just excited to play football,” Whitten said. “It’s been tough having to wait and (to) keep getting our season pushed back, so we’re really excited to get on the field and actually play.”

However, Whitten knows that it is important for his team to get off to a good start on Friday. The Firebirds now only have five games remaining on the schedule — after Brophy, they play Peoria Liberty, Queen Creek Casteel, Peoria Centennial and Phoenix Pinnacle — and any further cancellations would make them ineligible for the playoffs.

“Well, it’s always important in every season to start off with a good game, usually want to start with a win, and especially with it only being a five-game season now, every game matters that much more,” Whitten said. “It’s really important to get out there, play well, and get a win.”

Despite being three weeks behind most other teams, including all of the other teams in the 6A Desert Valley region, Whitten also has high expectations for the team.

“We want to win the championship,” Whitten said. “We think we are one of the best teams in Arizona, if not the best team in Arizona and we want to go out there and prove it.”