COVID-19 safety a priority as youth soccer returns, yet concerns about compliance remain 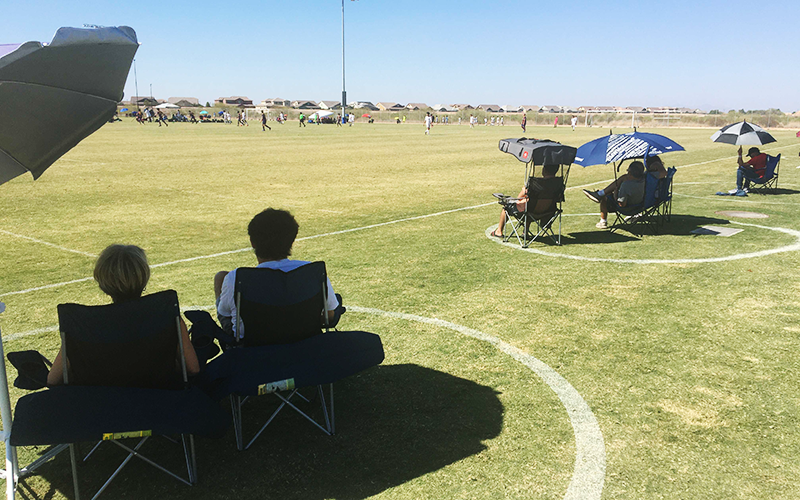 They also used hand sanitizer, wore masks and socially distanced because this is what sports look like during the COVID-19 era.

More than 450 teams – boys and girls under-7 to under-19 – converged in the Phoenix area to compete, test their skills and hopefully raise a trophy in triumph. Many came from California, where coronavirus restrictions still do not allow events of this scale.

The specter of a global pandemic hung over the fields. There was a different look and feel to the event, a reminder of an invisible threat.

The tournament host, Arizona Arsenal Soccer Club, informed participating teams in advance that they would be required to follow COVID-19 safety guidelines recommended by the Arizona Soccer Association and the Centers for Disease Control.

Coaches and team administrators passed the information to parents and players, and the AASC posted the guidelines on the tournament’s website.

Upon check-in, the AASC required each team to sign a letter of compliance before they were allowed to take the field.

In addition to standard field markings, spaces between fields at Desert Sky Park in Gilbert were carefully measured and chalked with circles to encourage spectators to remain physically distant.

Tournament organizers placed benches for coaches and players on one side of the fields while parents watched their kids compete from the opposite sidelines. Guidelines prohibited intermingling of spectators and players during matches.

Signs informed spectators that certain areas of the sports complex were designated exclusively for players, coaches and tournament staff.

In the trophy staging area, jugs of hand sanitizer sat next to the first-place silver cups. Someone had adorned some of the cups with face coverings bearing the word “Champions.” 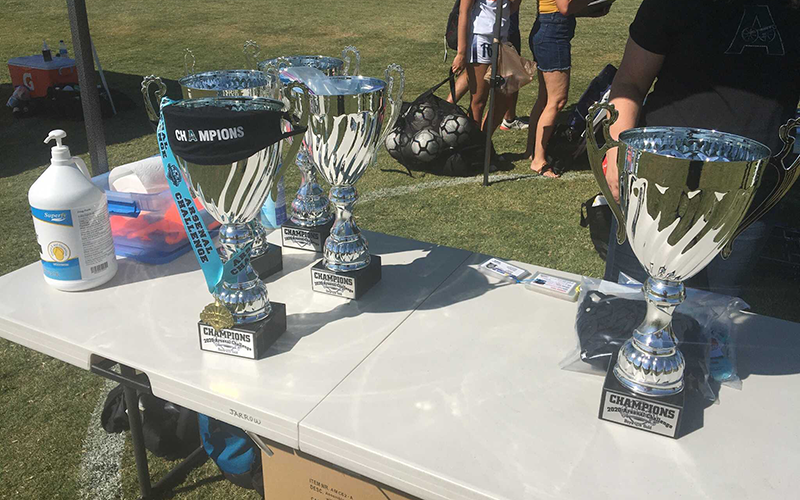 A jug of hand sanitizer sits next to a mask-wearing trophy on a tournament organizers table at the Arsenal Challenge. (Photo by Aaron Bradley James/Cronkite News)

Doing it for the kids

As president of AASC, Geoff Borger played a major role in organizing and hosting the Arsenal Challenge – by far the largest home event on the club’s annual calendar.

Over the past six months amid the pandemic, running the club and organizing the tournament presented huge challenges for Borger and the AASC.

“We do it because we love the club, we take pride in the club and obviously we do it for our kids,” Borger said. “Even if things aren’t totally back to normal, they’re getting back to normal, and the kids are back to playing soccer, and that makes all of us very happy.”

This year’s tournament drew 459 teams, including 152 from out of state. Borger said that more teams than usual came from states like California, a migration many club sports in Arizona have witnessed because of looser restrictions here.

Ten sites across the Valley hosted a total of 732 games during the three-day competition.

With thousands of kids and their families, plus administrators and spectators, converging on fields around the Valley, enforcing safety protocols became a major concern.

“Our No. 1 priority, COVID or no COVID, is to keep our kids safe,” Borger said. “No. 2 priority is getting our kids back to playing soccer. The third priority was the convenience to our parents. The parents had to make some sacrifices.”

Those sacrifices included wearing masks, using hand sanitizer, physical distancing and watching games while remaining much further from the on-field action than normal.

City of Mesa protocols forbade non-participants from entering facilities during competition, which left many parents watching their kids’ games from the surrounding desert or from an adjacent parking lot.

Despite the inconveniences, spectators were “for the most part, very cooperative,” Borger said. “They were very polite.”

Mask-wearing requirements presented the greatest challenge for those tasked with enforcing safety protocols.

“There were a few instances of people talking back and arguing with us, but nothing that really got escalated, and even those instances were isolated,” Borger said. “We had an army of volunteers, what we would call the field marshals. It was their responsibility to help people be in compliance.”

Borger felt that, more than anything else, effective communication allowed the AASC to conduct a safe tournament that minimized health risks to all attendees and participants. 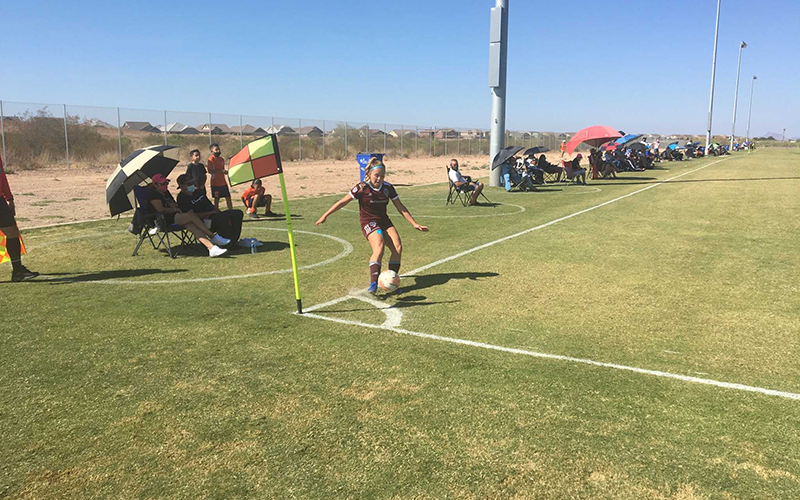 Spectators physically distance themselves while watching a game at Desert Sky Park in Gilbert on Oct. 11. (Photo by Aaron Bradley James/Cronkite News)

Brent Erwin serves as the executive director for another youth soccer club in the Valley, Real Salt Lake-AZ and told Cronkite News in a recent interview that his club implemented COVID-19 safety protocols when play resumed in August. The club has seen good cooperation from most involved, and the effort has been successful so far.

“I think we’re the biggest youth sports organization in Arizona,” Erwin said. “Within our own club, there has not been one case of community spread of COVID through soccer.”

According to Erwin, implementation can be a complex process for clubs like his.

Clubs, leagues, cities and families all have different roles and responsibilities in the process, and they may have significantly different attitudes about how to implement COVID-19 safety protocols.

As a result, observance and enforcement of protocols can vary significantly from day-to-day, event-to-event, and location-to-location.

Despite the complexities, Erwin said, “The compliance that I have seen, not only within our club, but statewide, has actually been fairly good, and I think it’s shown by the lack of transmission.”

Erwin credited his players’ families for assisting RSL-AZ in their enforcement efforts.

“By and large, the families understand that it’s serious, and I think they’re taking care of things before they even get to the field,” Erwin said.

The club followed up by making an educational video and creating a weekly newsletter to share information with families.

“I think that we’ve done a good job as far as when the families show up, they’re not surprised by what is being asked of them,” Erwin said. “My feeling is, if you understand what’s coming and why it’s happening, it’s much easier to comply.”

The Arizona Soccer Association has also assisted RSL-AZ in its efforts to keep players safe from the dangers of COVID-19.

“I really do feel like they have been on the front foot with this,” Erwin said. “I can’t think of one time that we’ve called the Arizona Soccer Association and they haven’t been willing to answer a question or help.”

Erwin said cities such as Mesa and Tucson have also played their part by modifying access to facilities, providing personnel to monitor spectator behavior and assisting in hiring police or security officers whose “job was literally to go from field to field and keep people spread out.”

Other measures enabled RSL-AZ to occasionally perform temperature and symptoms checks to minimize the chance of COVID-19 transmission among players and coaches.

According to Erwin, RSL-AZ prefers to err on the side of caution if there is any gray area or confusion about local safety protocols.

As long as his club continues adhering to these standards, Erwin has no major concerns for the safety of parents or players attending RSL-AZ matches.

“We just can’t get complacent,” Erwin said. “Complacency is (now) what I’m fighting against.” 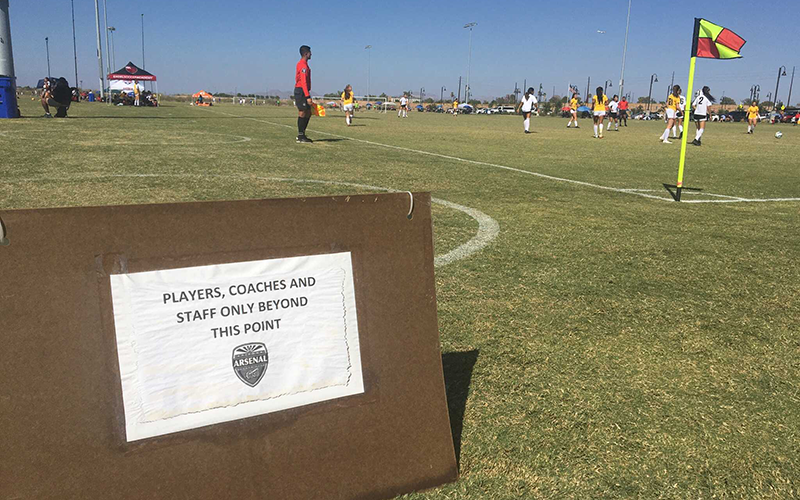 When play first resumed in August, Taylor graded compliance at matches he attended as an “A-plus.” Since then, he said that he has observed compliance slipping, in somes cases low enough to warrant a “C” grade.

“The different venues in different cities have their own protocols in place, and that throws it into a little bit of disarray,” Taylor said.

Some of PRFCYS’s matches fall outside the jurisdiction of the ASA, so clubs cannot rely on the ASA to assist them with implementing safety protocols at these events.

Coaches sometimes bear the responsibility of policing the behavior of spectators at matches.

Taylor explained that sometimes this responsibility is just too much for a coach already tasked with managing a team and winning a match.

As a result, responsibility to comply with safety protocols may fall on the spectators, who essentially have to police themselves.

Like AASC and RSL-AZ, PRFCYS has used videos and newsletters to communicate with its members and educate them about COVID-19 safety protocols, and according to Taylor, reactions from parents have been “very good.”

Taylor explained that confusion and frustration can occur when a group of parents and players grow accustomed to safety protocols at one sports facility or city, then travel to a different facility where they encounter a whole different set of safety guidelines.

Taylor would like to see greater oversight, possibly from a state governing body such as the ASA, to help resolve these inconsistencies and remove the “gray areas” that complicate safety protocol enforcement. 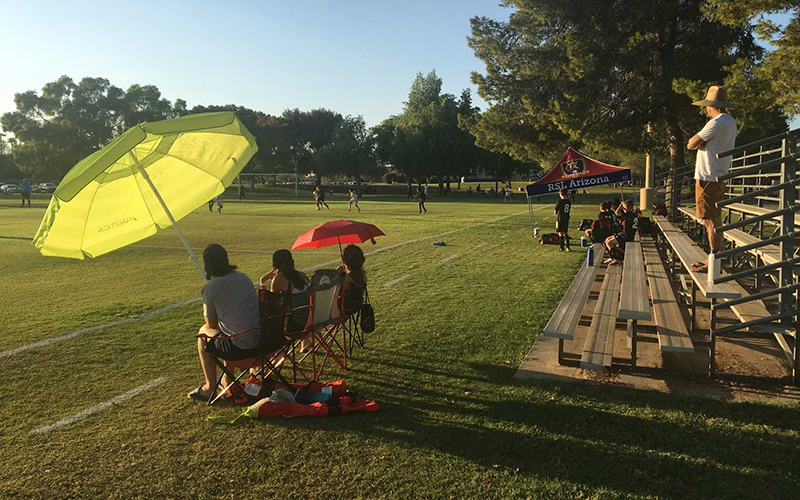 ‘They’ve gone through a tough thing’

Coaches and administrators at Valley youth soccer clubs seem to agree that getting their young players back out on the fields is critical, especially to the mental health of the athletes.

However, they also agree that returning to play should progress only under the safest circumstances possible.

“We all understand the importance of getting kids back out there, just for the mental health side of it, and just being able to socialize somewhat with teammates, because they’ve gone through a tough thing – as we all have,” Taylor said.

Said Erwin, “We’re on the frontline of providing kids an outlet that they love, to give them some sense of normal life, at a time when their entire lives have been turned upside down.”

On remaining vigilant about the danger of COVID-19 as kids return to play, Borger said, “We don’t want to be the reason why we have an outbreak. I don’t want that on my watch. No way. So, I’ll do whatever I need to to do to make sure that doesn’t happen.”