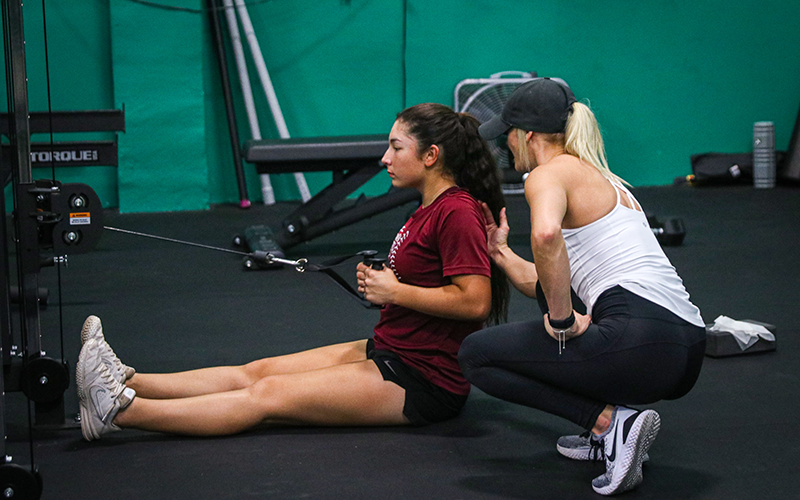 Breanna Macha-Peterson places her hand on Isabella Angelo’s back to help her better understand muscle to mind connections while working out. (Photo by Cierra Luna/Cronkite News)

CHANDLER – Breanna Macha-Peterson, a former Arizona State softball ace, knows how to rise to a challenge. And plenty have come her way in 2020.

After helping lead the Sun Devils to the 2018 Women’s College World Series, Macha-Peterson accepted a job at New Mexico as the Lobos’ pitching coach. But when the COVID-19 pandemic forced the cancellation of the college softball season, as well as her husband’s minor league baseball season, the couple packed up and moved back to Arizona.

Like a lot of assistant coaches, Macha-Peterson’s position at New Mexico was funded in part with money from offseason camps. When spring sports were canceled by the NCAA, and summer camps also eliminated for 2020, some assistant coaches saw their positions at least temporarily eliminated.

“It is nothing new, life has always been hard,” Macha-Peterson said. “Everyone is always going to have those tough times but I think using my experiences and hardships to help these athletes is what is important to me.”

One of her toughest life experiences was watching her mother battle brain cancer. Jane Macca was diagnosed with the disease when Breanna was 6. She battled for 12 years before passing away late in Breanna’s high school career. Her daughter found a way to persevere then and she is persevering now.

She recently landed at Extra Innings, a Chandler training center dedicated to the growth of softball and baseball players. So far, it has been a perfect fit. 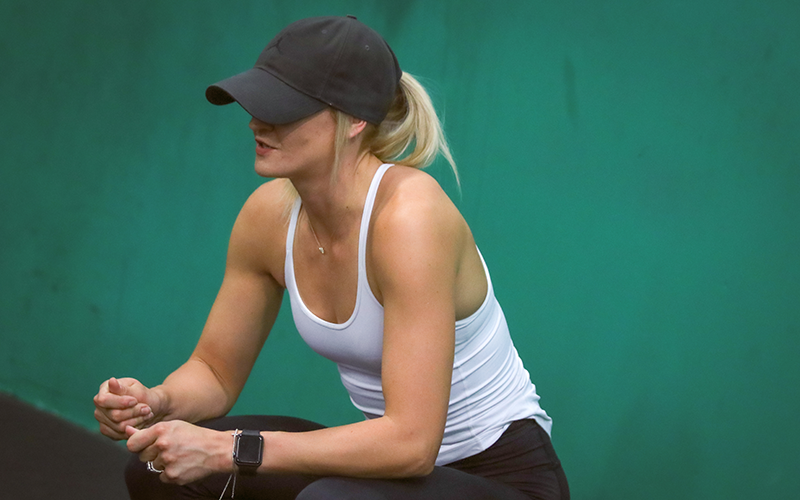 Breanna Macha-Peterson said that coaching strength and conditioning could give her an edge when she wants to go back to coaching softball. (Photo by Cierra Luna/Cronkite News)

“It is more on the developmental side of athlete’s games, so I have really enjoyed helping them outside of their sport,” said Macha-Peterson, who played softball at Mesa’s Red Mountain High before joining the Sun Devils.

Isabella Angelo, a senior at Hamilton High, has been training with Macha-Peterson since July and is seeing improvement.

“I just feel all around more powerful on the field,” Angelo said.

Macha-Peterson agreed and said that watching her athletes grow is her favorite part of her new position.

“It is so cool getting a text from their parents saying, ‘She looks so much stronger,’ or “She hit her first home run this past game,'” Macha-Peterson said.

“Little moments like that have really opened my eyes.”

Angelo’s junior season was also cut short because of COVID-19. She said that not playing ball has been the most difficult thing about the pandemic. And it can impact a player’s visibility in the recruiting process.

“I am glad I have Bree and Extra Innings as well as my throwing and hitting coaches.” Angelo said. “But it is still hard not being able to play in front of coaches … not being on the field or going to camps.”

Angelo said that Macha-Peterson has helped her remain motivated, given her guidance about the recruiting process and tried to make sure coaches are aware of her.

“She tweets about me and has coaches reaching out to her,” Angelo said. “But she tells me to just keep working and eventually the opportunity will pop up.”

Macha-Peterson considers it part of the job. 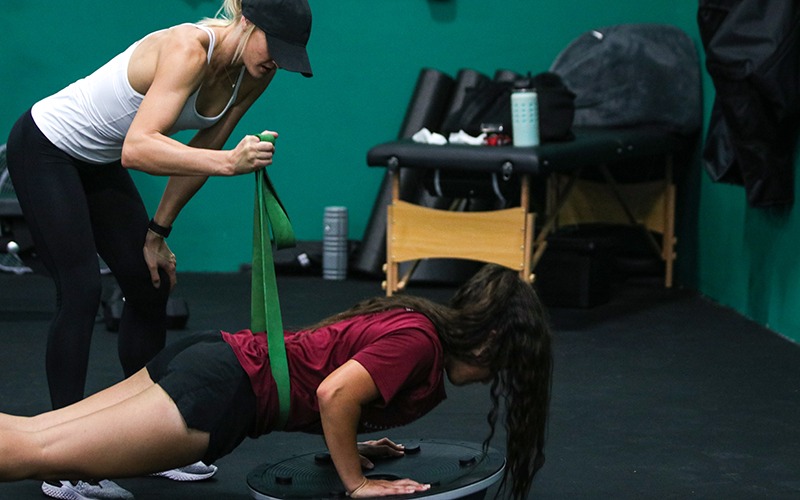 Macha-Peterson said that being creative when training her clients is her favorite part of her job. She uses modifications for certain lifts and exercises to build up the athletes strength until they are ready to complete the lift without it. (Photo by Cierra Luna/Cronkite News)

“If one thing I say can help them be better in life, be better in softball or whatever sport, that’s all I really want,” Macha-Peterson said.

ASU’s softball coach Trisha Ford said Macha-Peterson’s personality and traits she developed that made her successful as a player are now making her a better coach.

“Nobody outworked her,” Ford said. “She was stubborn and ornery, but that’s what made her the best.”

Macha-Peterson’s experiences at ASU also give her a unique perspective.

The 5-foot-6 Macha-Peterson, who could throw 70 mph while pitching for the Sun Devils, worked with four different pitching coaches during her time at ASU. She changed her pitching motion three different times over three years.

“That’s something that I really admire about her,” Ford said. “She was very steady in a really crazy current. … She’s somebody that’s persevered and adjusted as her career went on. She went along with all of it with grace and acceptance and really worked hard to perfect it every time.”

Macha-Peterson said her experiences she had, and the mentors she found, at ASU helped shape her into the coach and trainer she is today.

“Coach Ford, she is absolutely amazing,” Macha-Peterson said. “I tried to pick her brain when I was a player because she is one of the most knowledgeable coaches in the game.”

“Hannah Wilkinson changed my softball game, and if I can do that for these girls now, it would mean the world to me,” Macha-Peterson said. 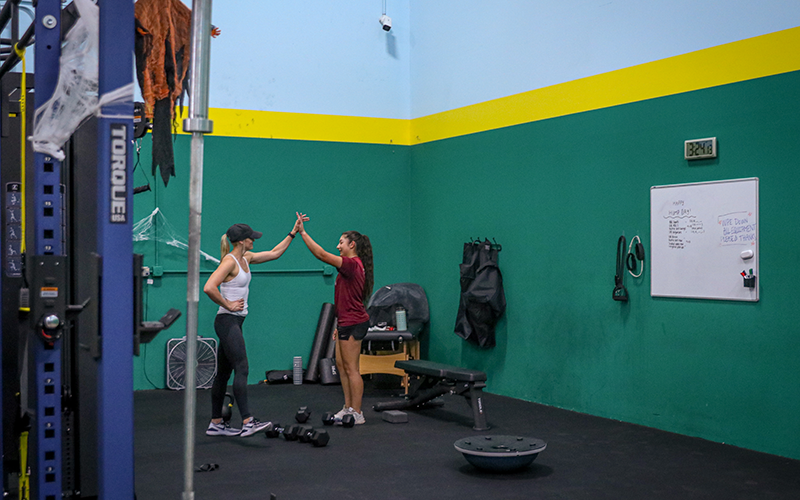 Isabella Angelo has been training with Breanna Macha-Peterson for about three months now, she said she notices how much quicker and stronger is when she is pushing off the bag or when she is hitting during a game. (Photo by Cierra Luna/Cronkite News)

However, Macha-Peterson doesn’t just push the athletes she works with. She also challenges those closest to her.

“This sounds terrible, and I do not know if I should even admit this, but in cardio she kicks my butt every time,” said her husband, D.J. Peterson, a third baseman who was playing for the Sugar Land Skeeters of the independent Atlantic League when it suspended play due to the pandemic.

“Having a wife that can out-compete you in a certain lift, cardio activity, or speed work is extremely motivating and keeps me working hard,” said Peterson, who returned to play with the Skeeters through the end of August in the four-team, independent Constellation Energy League that was organized in Sugar Land, Texas.

“With my season being canceled and her switching professions right in the middle of COVID, it has been tough,” Peterson said. “But we work out, train together, keep each other up, and we do everything to keep our mindset positive.”

During his time off, Peterson said his workout regimen has changed some. He used to focus more on muscle building and is now trying to work more on his endurance, an area where Macha-Peterson helps him the most.

Macha-Peterson and Peterson dream of both opening a training facility together someday.

“It is just something we both have passion for. I want to give back to the game that has done so much for me.”
Whether it’s training, coaching, or owning a business, Macha-Peterson said she is going to continue to develop all the skills and soak up all the knowledge that she can. In the meantime, she is grateful to be training and back home in Arizona.

“Sun Devil just runs in my family, and it was so hard to be away from home,” Macha-Peterson said. “I am so happy to be where I am at now…”