Who’s your Dadashov? Five takeaways from Rising’s victory over Reno 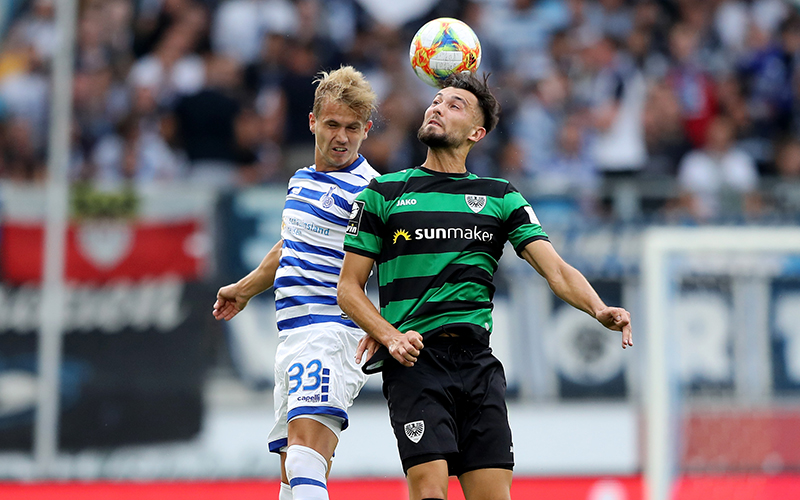 Rufat Dadashov (right) was a standout for clubs like Germany’s Preussen Muenster before signing with Phoenix Rising FC in January. He has made an impact for the Rising, too, after he buried his penalty kick in the bottom left corner against Reno Saturday night. (Photo by Christof Koepsel/Getty Images for DFB)

After falling behind 2-0 before halftime, the Rising battled their way back into the match thanks to goals from midfielder Kevon Lambert and team captain Solomon Asante.

Rising goalkeeper Zac Lubin had a rollercoaster performance, but eventually saved the day, keeping his team’s playoff hopes alive with a huge save in the final round of a do-or-die penalty shootout.

The Rising converted their first four penalties in the shootout before Lubin saved the fifth and final kick from Reno’s Aidan Apodaca. Then Phoenix’s Rufat Dadashov buried his penalty kick in the bottom left corner to secure the victory.

Here are five takeaways from a wild Saturday night at Greater Nevada Field in Reno.

From zero to hero

Rising goalkeeper Zac Lubin made a horrible mistake in the sixth minute, essentially gifting the first goal of the match to Reno’s Corey Hertzog. After receiving a pass near the top of his six-yard box, Lubin inexplicably passed the ball directly to the 1868 midfielder, who gladly accepted the gift and tucked the ball in the back of the Rising net to make it 1-0 Reno. Lubin could have tucked his tail between his legs right then, but he didn’t. Instead, Lubin regrouped, made several big saves to keep his team in the contest and eventually won the match for the Rising when he saved Aidan Apodaca’s final penalty attempt for Reno during the shootout.

Everything seemed to stack up against Phoenix in the days preceding the match. Junior Flemmings, the Rising’s league-leading scorer, could not play due to his ongoing suspension. Coach Rick Schantz remained on administrative leave. Phoenix grinded out a tough overtime win in last week’s match against Sacramento, while Reno cruised to a relatively straight-forward 4-1 victory over LA Galaxy II. Phoenix had to travel on Friday while Reno rested and prepared for the match. On top of all that, Phoenix had to play Saturday in Reno at higher elevation and in cooler weather than the Rising is accustomed. Down 2-0 after 35 minutes, it looked like it might be curtains for the 2020 season. Phoenix showed character and resilience to erase the two-goal deficit and force the game to a penalty shootout. The Rising players looked exhausted at the end of overtime, but somehow managed to find the legs and the nerve to convert all five of their penalties in the decisive shootout.

Reno had been riding an 11-game unbeaten streak going into Saturday’s match, which included a 2-1 victory over Phoenix on Aug. 29. Reno 1868’s season-ending hot streak had given them top seed and home-field advantage for the entire USL Championship playoff run. Now, that top seed belongs to Phoenix. The Rising will host El Paso Locomotive FC next Saturday in the friendly confines of their home at Casino Arizona Field in Scottsdale. Not only will the Rising not have to travel, but they will also be able to tap into the rabid energy of their home supporters who are hungry for a first-ever USLC title. Should Phoenix beat El Paso, the Rising would then host the Championship Final match scheduled for Nov. 1.

The Rising have come achingly close to raising the USL Championship trophy in the past two years. In 2018, Phoenix lost to Louisville City FC, 1-0, in the Championship Final. Last year, the Rising lost to Real Monarchs SLC in the Western Conference semifinals after a historic regular season that saw Phoenix win a record-setting 20 games in a row. Given the challenges that the team overcame on Saturday, Rising players and fans just might start thinking that 2020 is their year.

Capturing top seed and home-field advantage for the 2020 playoffs might seem like cause to celebrate, but the Rising still have their work cut out for them. El Paso will come to town next week high on a 13-game unbeaten run. Coach Mark Lowry and the Locomotive crew would love to knock off top seeded Phoenix and put themselves in position to capture their first USLC title. Having now played two overtime matches in a row, Rising interim coach Blair Gavin will have his hands full trying to get his side rested and prepared for Saturday’s Western Conference final. And should Phoenix prevail over El Paso, it still may have to face its old foe Louisville City in the Final. Louisville is still alive in the playoff run, and is set to face the Tampa Bay Rowdies in the Eastern Conference final next Saturday.

Both of Saturday’s USLC Conference Finals will be televised live on ESPN+, and the Championship Final will air live on ESPN and ESPN Deportes on Sunday, Nov. 1.