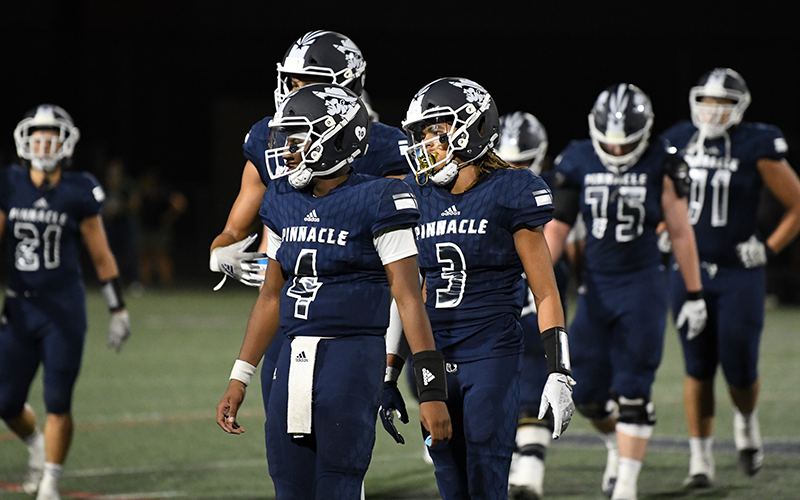 The COVID-19 pandemic has caused havoc with high school football team’s ability to practice and has led to some surprising blowouts. Traditional powerhouse Pinnacle High lost 64-0 to Chandler. (Photo by Kevin Hurley/Cronkite News)

You can probably blame the pandemic.

Week two saw multiple head-scratching beatdowns, including Chandler’s 64-0 shutout of Pinnacle, Liberty’s 30-0 shutout of Red Mountain and Hamilton’s 64-22 smackdown of Perry. Pinnacle and Perry were 2019 state quarterfinalists in the Open Division and 6A conference, respectively, and Red Mountain came up six points short of the 2019 6A Conference state title.

Coach Rick Garretson credited the Chandler Wolves’ outscoring of their first two opponents 108-10 to his team’s length of preparation in the offseason. Many other schools have had less time to prepare.

“June 8 was actually the first day that we were able to get together,” Garretson said. “Of course, we went like nine weeks without football. From the weight room perspective, and the conditioning and running (perspective), we got a lot of foundation. At that time, that kind of just continued on through because we really got to use a football toward the end of the summer.

“We didn’t even have 11 on 11 against each other until the first day of helmets (on Sept. 7), which was the official beginning of fall practice. Foundation (has) really helped us get off to a good start.”
Offseasons looked different among schools because every district has its own timetable about how to phase in football. Although some started the first week of June, others started much later.

And the COVID-19 pandemic continues to be an ongoing issue. At least 12 Arizona high schools have had to cancel games since the start of the season including most recently San Tan Foothills High School after a cluster of COVID-19 cases were discovered.

“It’s difficult to speak about other schools and their unique situations,” Hamilton Huskies coach Michael Zdebski said. “I know that COVID came about and shut things down from April through May for all schools. Some of it could be the plan their district had for acclimation into football. Everyone was a little bit different. Some school districts were allowing more freedom of lifting and other participatory events. Some school districts were very closed in what they would allow and at what time. That could be part of the scenario created.”

Hamilton blanked Centennial, 42-0, in the opening week, less than a year after they only defeated the Coyotes by nine points in the 2019 Open Division state quarterfinals. The Coyotes bounced back this past week with a 37-0 defeat of Mountain Pointe, but Centennial coach Richard Taylor believes his team was well behind other teams in terms of preparation. 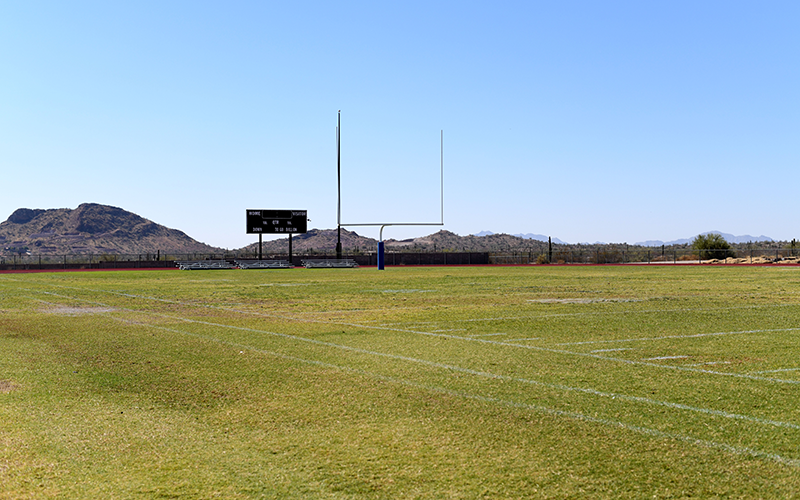 The San Tan Foothills High School football field will be empty for a while after a cluster of COVID-19 cases was reported at the school. (Photo by Kevin Hurley/Cronkite News)

“We just haven’t had enough time,” Taylor said. “We didn’t have summer practice, we didn’t have spring practice, we didn’t have 7 on 7, and we were shut down a lot in the summertime. That wasn’t the case for all teams. I think Mountain Pointe was in the same kind of position that we were (in) because we still weren’t very good (against them). We were still making lots of mistakes. But things kind of fell into place, even though we were making mistakes, and that there was definitely improvement from week one.”

Taylor also believes that “without a doubt,” lack of preparation and stricter guidelines have led to other teams getting blown out in their early games.

“As a matter of fact, I would say that some disparity in practice time leads to almost dangerous situations for teams that kind of just kept going through the whole thing,” Taylor said. “And for teams that were shut down, it definitely isn’t fair. At times it’s dangerous.”

Garretson feels fortunate that his team’s experience also helped the Wolves get off to a hot start with 44-10 and 64-0 victories over Liberty and Pinnacle, respectively.

“I’ve got guys that made a difference last year, that played when it mattered,” Garretson said. “That’s always going to help you, particularly (during) a pandemic because it’s still strange.”

Garretson said that Tuesday was the first day his players went back to school for in-person instruction and were able to have access to their lockers. In their first two games, they were on picnic benches at a junior high against Pinnacle and they were huddling up in the end zone like it was peewee football against Liberty.

Garretson was quick to say the blowouts were more about what his team did well rather than what Liberty and Pinnacle didn’t do.

“They worked hard to put themselves in that position,” Garretson said. “We played a good Liberty team and we played a really good Pinnacle team. I know the scores don’t reflect that, but those were two well-coached (and) structured football teams.”

In terms of other teams being a part of several blowouts across the 6A conference, Garretson wasn’t sure of the reason.

“You can’t say that Chandler, Hamilton, Pinnacle, Brophy or Centennial have weak schedules, because they don’t,” Garretson said. “There are no layups in our schedule this year. There are no layups in a lot of (teams’) schedules that lead to (blowouts) like that. I really don’t know why you have those. Arizona has always been known as a state for a lot of offense, a lot of points, and a lot of high-end quarterbacks and skill (position players). Sometimes things just get away.”

Garretson cited Liberty’s 30-0 whooping of 2019 6A runner-up Red Mountain as a surprising blowout. But to Garretson, being on the receiving ends of blowouts like that don’t mean anything for the rest of their season.

“The guys like coach Peterson (of Red Mountain) will bounce those kids back,” Garretson said. “Same thing with (coach Dana) Zupke of Pinnacle, because he’s got a really good football team, but sometimes things get away from him.”

Garretson recalled how his 2016 state title team turned around their season after a 52-7 defeat against Mountain Pointe. The 2016 Wolves went on to beat Mountain Pointe in the state championship game.

“Sometimes I think we forget that we have 16, 17 and 18-year-olds, that sometimes don’t always (play) the way that you plan,” he said. “Kids are resilient, and we got really good coaches in the state that can bring guys back and make things happen the following week.”

Garretson mentioned Centennial, the Wolves’ week five opponent, as an example of a team with a great coaching staff with resilient players. Centennial was dismantled by Hamilton, 42-0, in week one before beating Mountain Pointe 37-0 this past Friday.

“Obviously, they bounce back from a 42-0 (loss) and I’m sure they’re going to be a different team when we play them in week five than they were in week one,” Garretson said. “Good coaching staffs and experienced coaching staffs know how to get their kids (to turn it around) and one game’s not going to make you or break you for a season. … I do know this when we go play Centennial: If we don’t come to play, we’ll have issues.”

Taylor, meanwhile, classified his team’s rebound and beatdown of Mountain Pointe as a character-building win.

“We have kids with character,” Taylor said. “As tough and embarrassing as (the loss to Hamilton) was, the kids, rather than just throwing up their hands and feeling like there’s nothing that they could do, they prepared mentally better, and they paid a lot more attention to their scouting reports and were much more focused. In a way, Hamilton did us a favor.”

Centennial will continue to push on in its matchup against Williams Field on Friday. Taylor has been impressed with what he has seen from his team’s next opponent on tape.

Hamilton, the team that handed the powerhouse Coyotes a 42-0 loss in the season opener, are in a much different situation. Zdebski said his team has been preparing much longer than Centennial has.

“The preparation began last December to allow us to be at a point where we can compete with Centennial and Perry at this time,” Zdebski said.

“They’re extremely talented and well-coached,” Zdebski said. “We’re going to use this week to continue to prepare for them. You won’t know if that’s a good thing or a bad thing until the game is over because we would rather compete and have the opportunity to play a game and continue to develop our team at a high level. I think when you lose that 48 minutes of game time in such a unique year as this year, I think that it could be a big detriment into the preparation as well.”