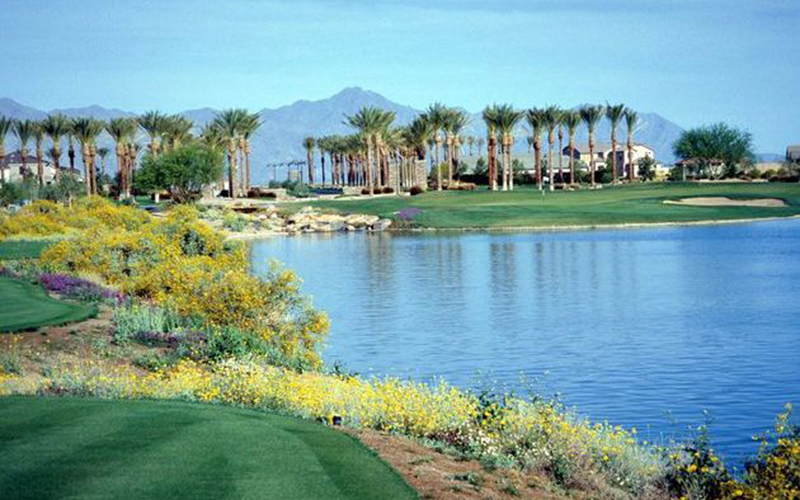 PHOENIX – Many of the state’s top golf programs will battle it out at the Duke Open in Maricopa starting Thursday in what could be a preview of the Arizona Division I state championships two weeks from now in Tucson.

However, Hamilton coach Steve Kanner might be inclined to add an asterisk to the Huskies results, regardless of where the defending state champions finish. He will be without his top player, defending Division I individual state champion Johnny Walker, who committed to an out-of-state tournament the same day.

“We’re not going to have him, which will hurt our competitiveness a little bit, but it’ll give me a chance to see who will step up,” Kanner said. “It gives somebody else on our team a chance to help us out. And I think the team is fairly deep, so we’ve got another player that will be ready.”

The invitational will be played at the Duke at Rancho El Dorado, which is named after actor John Wayne, who once owned land near Maricopa.

Kanner said the field is not big, but it includes host Brophy Prep, Pinnacle and Casteel – teams he believes belong on the list of top four squads in Division 1 along with Hamilton. And it will give the top contenders one last opportunity to see how they stack up before the state tournament Oct. 28-29 at the Omni Tucson National Resort.

A strong Brophy Prep team that finished second, three strokes behind Hamilton, at the 2019 state tournament will count on depth to try to upset the Huskies, while Pinnacle and Casteel also could pose a threat at the Duke and at state.

And Kanner said it is a chance to build momentum in a season disrupted by the COVID-19 pandemic.

“It keeps us competitive all the way through the season,” Kanner said. “There weren’t a lot of tournaments in October, so we’re glad we can have this one because this season was reduced a little bit. I think it’ll help keep us sharp heading into the state tournament. It’s a small field, but it’s a really good field. I think competition will be excellent, so that’s always a good thing. I think that’s probably the reason we’re looking forward to it.”

Brophy would like nothing more than to flip the script of the 2019 season, and like Kanner, Broncos coach Jon Shores is looking forward to finding out where his team stands leading up to state.

“Normally, we only had a match or two in October, and then a couple years ago, this tournament came on the scene,” Shores said. “And then we were able to get into it last year, and I was really happy about it, because it’s really important for our guys to stay sharp and just stay competitive.

“And this event is going to have Hamilton and Pinnacle, who are two really good teams. So, this is going to be really important for the guys seeing where their game stacks up and seeing what we need to do and work on in preparation for the state tournament.”

Shores won’t be holding anything back.

“I’m going to have my top five play in that tournament, obviously, because I want them competing together as a unit just to kind of see where we stand and what we can do to better prepare for what we’re going to need to do to compete against Hamilton and Pinnacle down at state,” Shores said.

This won’t be the first time the top guns have met this season, and the most recent tournament illustrates how competitive the Duke and the state tournament could be.

Hamilton, Brophy and Pinnacle shot it out at the Dobson Ranch Invitational in Mesa, where Hamilton fired a 21-under-par team total to emerge one shot ahead of Brophy and two shots clear of Pinnacle for the title.

“I think we (played our best),” Shores said. “I’ve been head coach for 14 years and with the team for 20 years, and we finished 20 under par as a team. And we still lost a Hamilton by one shot.

“If we can go down to the Duke Open and we can compete and beat Hamilton, it’s going to give the boys a lot of confidence. But it’s also going to put Hamilton a little bit on notice that we were able to compete with them and we can beat them if we’re playing well.”

Shores stressed the importance of playing well in the tournament to put pressure on the reigning state champs.

“It’ll be a good test for all of us for sure. … I want our boys to play good golf (and) put pressure on them. Because if they haven’t really faced any pressure all season long, then the game of golf is a lot easier. But if the guys you’re playing with (are playing well), it just adds another layer of pressure. And I want the boys to put that pressure on these other teams so that the other team knows that our boys can hang with them blow for blow.”

The Broncos have yet to win an invitational this year, and the Duke Open will be their third and final tournament before state. They came in second to Hamilton in the Huskies Invitational at Hamilton’s home course of Whirlwind Golf Club in Chandler in addition to the close-call runner-up finish to Hamilton at Dobson Ranch in Mesa.

“Obviously, they’ve had our number, and they beat us pretty easily at the Hamilton tournament,” Shores said. “It was really close last week at Dobson, so it’ll be really important for our boys to go in and compete. And obviously, we want to win because it’s going to show the team that if we play well, we can beat Hamilton. I always try to tell the boys, especially in these events that lead up to state, ‘I don’t necessarily care about winning the matches and tournaments we play in. I just want us to play good golf.’ That way, we can build on kind of what we’re doing throughout the season and gain confidence.”

Shores again returned to the theme of making Hamilton feel some heat leading into the state championship.

“If you make a mistake, learn from it,” Shores said. “And if that mistake means that we didn’t win a tournament, I want the boys to learn from that so that when we do get to state, they’re going to have prepared themselves for that moment. But the really important thing I want the guys to come away with, win or lose at the Duke, is that we play consistent and solid golf so that Hamilton doesn’t feel like they’re just going to go down to state and kind of walk all over everybody.”

Shores believes his team has what it takes to take home the state title at Tucson National.

Brophy senior Cameron Kaiser is feeling confident with the Broncos rolling out their top five at the Duke on Thursday.

“We’re going to have the state team out there,” Kaiser said. “It’s going to get us used to playing with our top five guys and seeing what we can do. (I’m) hoping to win it and give us some confidence going into state.”

Kaiser knows that reigning champion Hamilton is the favorite to win at the event as well as the state championship, but he remains confident.

“Hamilton’s going to be out at the Duke as well,” Kaiser said. “If we beat them, I feel like that’s definitely (giving us) some confidence, even if we place well and see some good scores. We can get better in between then and state, and it’ll just boost our confidence going in the state.”

Like his coach, Kaiser believes it’s important to put some pressure on the defending champions in the final tuneup.

“I think that’s pretty important because we haven’t played a tournament yet with (just) our top five guys,” Kaiser said. “Even out at Dobson, one of our top five guys had to leave early the second day. Even without him we placed one stroke behind Hamilton. With our top five guys out at Duke, it’ll definitely show Hamilton what we’re made of, and we should be good going into state after that.”

Kaiser said he “doesn’t see why” his team can’t win at state.

As for Kanner, he doesn’t view Brophy as the only threat.
“Brophy is extremely talented and they’re a very deep team,” Kanner said. “We will have our hands full, that’s for sure, against them, against Pinnacle, and also against Casteel. They’re all good teams.”

A late entry to the event, Pinnacle finished sixth at last year’s state tournament and coach Jay Thomas is happy to play the role of the dark horse.

“We are just looking to have another great outing against Brophy and of course, Hamilton,” Thomas said. “We finished the regular season. Our matches ended last week, and we just have practice rounds and the tournament at the Duke coming up. We’re looking forward to competing once again and getting one more good outing in before the state tournament in Tucson.”

Thomas and his team will use the Duke Open as a building block for the state championships the same way that Brophy and Hamilton hope to.

“We are looking to see and face the toughest competition in the state,” Thomas said. “We were at the Dobson Invitational a week or so ago and finished third, one (stroke) behind Brophy and two (strokes) behind Hamilton, so we’re looking to get everybody competing that’s going down to state and work as hard as we can to keep that preparation going.”

He laid out simple expectations for his players heading into the tournament.

“(Just) compete, and if we can win, that’s just a bonus,” Thomas said. “Usually, if we’re competing at our highest level, then that usually answers that question. It’s not going to make or break us to go down to state if we do not win, but we’re going to show up there with everything we have and hope that the chips fall where they may. We compete hard, and we’ll take whatever comes our way.”