Phoenix was awarded on Wednesday the 2026 Women’s Final Four, something the community has never hosted before. The event will be held at Talking Stick Resort Arena. In 2019, Baylor captured won the title Tampa, Florida. (Photo by Mike Ehrmann/Getty Images)

PHOENIX – Brooke Todare held one thing consistent while pitching Phoenix as a host of the 2026 NCAA Women’s Final Four. The city is built for this.

“Mega-events have become part of the DNA of Phoenix and the state of Arizona,” Todare, co-chairwoman of the Phoenix Local Organizing Committee, said in an interview with Cronkite News. The committee collaborated on the bid with the city, Visit Phoenix, the Phoenix Suns and Phoenix Mercury, and Talking Stick Resort Arena, where the games will be played.

The NCAA chose Phoenix as host of the 2026 Women’s Final Four on Wednesday. It marks the first time the city will host the tournament’s final three games, which will take place April 3-5.

Talking Stick Resort Arena is undergoing $230 million in renovations that are expected to be 80% complete before the end of the year, according to Downtown Phoenix Inc.

The NCAA selected Phoenix over Portland, Oregon, Columbus, Ohio, and Tampa, Florida, which was chosen to host the tournament in 2025.

“I was delighted when I received the call, but frankly, not surprised or even mildly shocked,” Ray Anderson, Arizona State University vice president for university athletics and co-chairman of the Phoenix Local Organizing Committee, told Cronkite News.

Arizona State will be the host institution for the tournament, something Anderson says will be “a collaborative effort.”

“We will apply our trademark innovation to provide an unforgettable experience for the NCAA, student-athletes, alumni, media and fans,” Anderson said in a statement from the committee Wednesday. 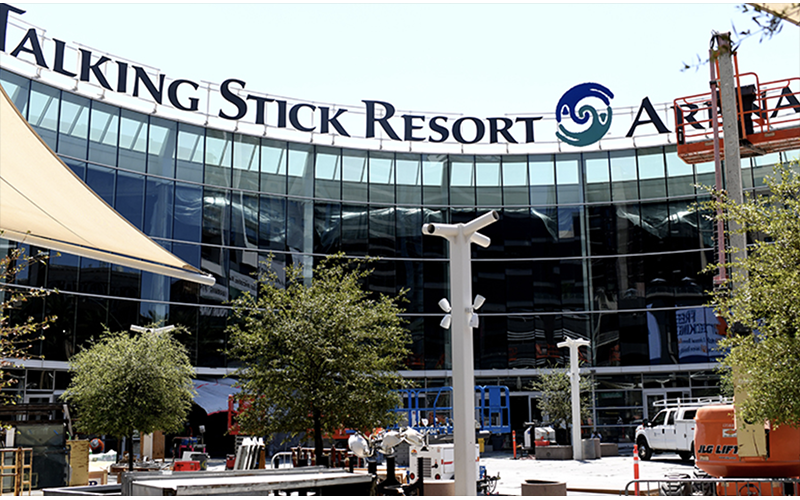 Taking Stick Resort Arena, which is undergoing renovations, will be the host of the NCAA Women’s Final Four in 2026. (Photo by Kevin Hurley/Cronkite News)

Todare, a former ASU golfer, said her immediate reaction to winning the bid was “complete and utter relief.” She said she was “grateful for just everyone and how they pulled together in what was a very non-traditional bid environment to pull this off and really show the state off in such a great light.”

The committee on Sept. 1 made a virtual pitch to the NCAA that included Todare and multiple members of Arizona women’s basketball community, including ASU head coach Charli Turner Thorne.

Todare and Anderson cited the state’s ability to host mega-events, such as the 2015 Super Bowl, the 2016 College Football Playoff National Championship and the 2017 Men’s Final Four as a significant factor in being chosen. Anderson said the state has “demonstrated time and time again” that it can host these events “at a very high level.”

That confidence was affirmed by Nina King, chairwoman of the NCAA Division I Women’s Basketball Committee, who said in a statement that Phoenix has a “proven history of supporting women in sport, business and philanthropy.”

Anderson said the downtown district’s growth in entertainment, lodging and dining and its proximity to Phoenix Sky Harbor International Airport makes it “a destination like no other.”

“It’s just going to be great for downtown Phoenix,” Todare said. “It just comes alive when it’s busy and people are bustling.”

The NCAA chose Phoenix as a finalist to host the 2025 or 2026 Women’s Final Four. The four finalists made their final presentations to the NCAA Division I Women’s Basketball Committee Sept. 23-25.

The city had previously sought to host the games in 2001 but lost to Cleveland. In an interview with Cronkite News, Todare said the city is not the same as it was 19 years ago. The city has since made the necessary investments to host the events, she said.

Along with the 2026 Women’s Final Four, Arizona also will host the 2023 Super Bowl, the 2024 NCAA Men’s Final Four and the 2022 College Football Playoff semifinal as part of the Fiesta Bowl.