Local boxing coach Tommy Roberts said he texted client Dennis Gardeck congratulations after the latter’s career day in the NFL. “He’s a very humble guy. I’ve got to know him as a person, which is kind of cool because he’s really starting to blow up right now,” Roberts said. (Photo by MSA/Icon Sportswire via Getty Images)

TEMPE – Dennis Gardeck has rolled with the punches his entire football career.

The Arizona Cardinals special teams captain took his first-ever career snaps on the defensive side of the ball in Sunday’s rout of the New York Jets. Although he was on the field for just 10 of the Jets’ 69 offensive snaps, his effect was enormous, tallying a pair of sacks in place of the injured Chandler Jones.

Gardeck’s search for alternative exercise avenues during the 2019 offseason brought him to IronGloves Boxing Gym in Tempe and personal instructor Roberts, a 2016 Arizona Golden Gloves winner.

During the past two years, Roberts estimates the 6-foot, 232-pound linebacker has endured a combined 30-plus weeks worth of drilling mitts and emptying his gas tank. Roberts said Gardeck was keen on improving his hand-eye coordination and rhythm and timing — each a facet that could strengthen his skill-set on the football field.

“Even during quarantine he set something up with me,” Roberts said. “We trained one-on-one. He wasn’t taking any breaks.”

Ironically, Gardeck’s months-long hobby mirrors some of the striking pedagogy that Jones’ older brother, former UFC light heavyweight champion Jon Jones, taps into as a means to broaden his arsenal of attacks. And, it could prove to be the secret sauce that positions Gardeck as a fixture on passing downs on Arizona’s defense.

It’s already paid dividends. Gardeck didn’t stick out like a sore thumb, a short-and-stocky Division-II linebacker, who didn’t belong, Sunday. Or, a former grill-crew member who flipped burgers and dunked fries into oil in the obscure backroom of a McDonalds.

Gardeck looked the part of a demonic pass-rusher, possessed by the exigency to inflict pain and embarrassment on the opposition. He looked the part of an elite special-teamer, more than capable of holding his own as an outside linebacker in the NFL.

His offseason training helped him get there.

Roberts said Gardeck sometimes audibly thinks of his boxing techniques as a type of movement near and dear to linebackers. He’ll compare and contrast a motion on the mitts to a move he utilizes to seduce blockers. 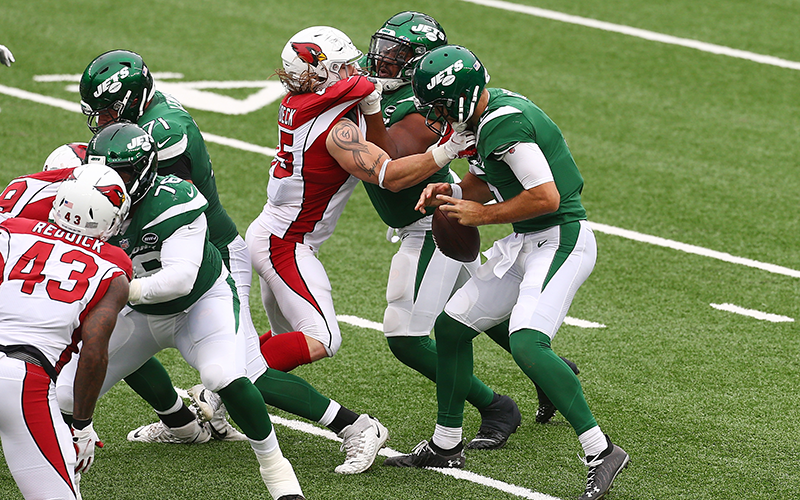 Dennis Gardeck laid nerves to rest Sunday at MetLife Stadium in East Rutherford, NJ, making his inaugural appearance as a defender in the National Football League. Formerly a jack of all trades in a kitchen at McDonalds, Gardeck has emerged as a Swiss Army knife for the Arizona Cardinals. (Photo by Mike Stobe/Getty Images)

“But, I don’t know anything about football,” Roberts said, “so it kind of goes over my head.”

The disconnect is fine. Roberts still pushes Gardeck to his limits. And, Gardeck continually rises to the challenge.

“His work ethic is insane,” said Roberts, also pointing out Gardeck’s endurance, once a weakness, has transformed into a source of ceaseless vitality. “He’s either coming from a workout or he’s headed to a workout after (and) that’s crazy because boxing training is pretty tough.”

Roberts said there have been a few occasions where Gardeck invites Cardinals teammates, including running back Chase Edmonds, to workout sessions – he encounters a variety of college and professional athletes interested in boxing to boost attributes for other athletic endeavors.

Roberts has worked with basketball, football and tennis players. But, whenever he gets the chance to grind with Gardeck, he’s in awe.

“His athleticism stands out. He was able to pick things up almost like a young kid … they’re like sponges,” Roberts said. “He’s like that as a grown man.”

Roberts’ list of clientele has dipped and turned because of the pandemic. He stays afloat by training his customers outdoors.

Exhausting training inflamed by extreme desert heat helped prepare Gardeck for when the Cardinals needed him most.

The in-game exit of Jones – a bonafide superstar – who retreated to the locker room prior to halftime Sunday and was subsequently ruled out with a biceps injury, decimated the maintenance of an upbeat mood stemming from an otherwise strong showing, defensively.

Gardeck’s fury was a catalyst to uplift teammates and restore optimism.

“When I was out there, first, I was really nervous and I was trying to laugh and joke about it,” said Gardeck, also revealing he centered his chakras and gained an edge by instigating “mental warfare” with New York’s offensive linemen.

“They obviously didn’t know who I was, so I just had to be like ‘Yo, I’m a special-teamer’…that way when I did beat them, it’s like ‘Dang, we just got beat by a special-teamer.'”

A phenomenal special teams player at that — Gardeck was recognized as a Pro Bowl alternate his second year in the league. Now, pending Jones’ status, he may very well find himself logging a range of defensive downs across the next 12 weeks of Arizona’s 16-game schedule.

Gardeck’s original shining moments on defense came at critical junctures — he sacked Jets quarterback Joe Flacco in the waning moments of the first half, and struck again with five minutes left in the final quarter of action — but his presence was felt for the entirety of the contest.

“The team that has the best energy on their sideline has won the game in the games we’ve played,” coach Kliff Kingsbury said. “It’s real, and we wanted to work at it. … I thought our guys did a good job of creating their own energy.”

In part, because Gardeck made it easy — admittedly, he’s an emotional guy, and said he let his emotions run free while running down the enemy and later celebrating, deservedly.

Hello, do you have a moment to talk about Dennis Gardeck's sack celebration? 😂 @DGardeck @AZCardinals pic.twitter.com/amxW7UAqMa

“I see it every day in practice, he is hell on wheels going on scout team against our offensive line, and they hate trying to block him because he’s nonstop, he’s relentless and that’s what you saw out there…he just keeps going,” said Kingsbury, also giving a nod to Gardeck’s unparalleled study habits, asserting he studies harder than any player he’s ever seen.

Gardeck told reporters, after being awarded his captain’s patch at the tail-end of training camp, that his relationship with special teams coordinator Jeff Rodgers had reached a threshold of familiarity, which grants the third-year undrafted linebacker the freedom to zero in on nuances regarding weekly opponents.

Comfortable, confident and closer to mastering his variety of roles on Arizona’s special teams, Gardeck has seemingly lunged at the opportunity to expand his football acumen.

Although there’s no extraordinary aspect to his game — aside, maybe, from a desire to boost his intelligence and anticipatory skills, topped by a contagious spirit — there is hardly anything about Gardeck, as a player or person, that is ordinary.

“You can point to it as coaches, look at this guy, there’s a reason he’s able to go in there when he gets his opportunity and make those plays because he does it every single day (in practice), as hard as he can go,” Kingsbury said. “There’s no doubt, a piece like that on (our) team brings a lot of inspiration.”

From his carousel in the professional workforce, to his determination to be a “whoa” guy rather than a “go” guy — meaning, he’d prefer his coaches tell him to slow down in practice than move faster — to his extracurriculars in the offseason, Gardeck itches to make an impact wherever he’s asked to contribute.

If Jones is shelved indefinitely, Kingsbury and Company must decipher a plan that pertains to scheme and personnel moving forward. The presumptive return of outside linebacker Devon Kennard lingers as a key assist. But, there’s a high likelihood featured roles will be discussed for young linebackers Haason Reddick, Kylie Fitts, Isaiah Simmons and Gardeck to boot.

“I just try to play my brand of football, which is fast and physical, and apparently the guys on the team have noticed that,” said Gardeck, shortly after he was elected as one of eight team captains in early September. “It means a lot to me that my teammates consider me (a leader) on this team.”