By Emily Carman/Special for Cronkite News 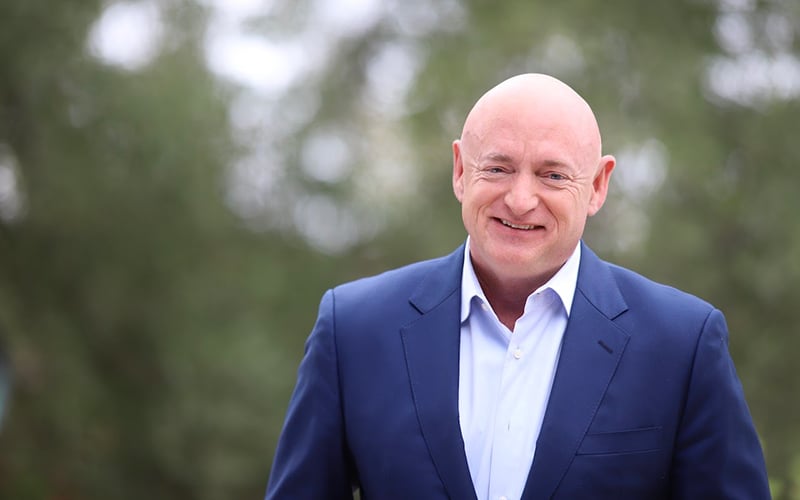 Mark Kelly, who’s seeking public office for the first time, hopes to address COVID-19, race relations and the economy, among other issues, if elected over Republican incumbent Martha McSally in the 2020 election. (Photo courtesy of Maria Hurtado/Mark Kelly for Senate)

How would you rate Arizona’s response to the COVID-19 pandemic, and why?

At first, the state responded well to the pandemic, said Kelly, who’s seeking public office for the first time.

“The governor was clearly looking at the data, and I think that’s incredibly important,” he said, adding that shutting down the economy was a hard decision but also the right decision.

However, the state stopped listening to the advice of public health officials and reopened too early, he said, calling the decision political rather than one rooted in facts, science and data. Kelly said politics need to be kept out of such decisions in the future.

“We’ve got a public health crisis that spurred an economic crisis, and I really feel that these things have been made worse by a crisis in leadership,” Kelly said.

Kelly said he would respond to this pandemic on both the public health and economic front.

“We need leadership to encourage people to continue to wear a mask, socially distance, wash their hands,” he said.

Kelly is encouraged by the positive trends across the state and said Arizonans have stepped up to perform their personal duties in regard to public health.

On the economic front, Kelly’s goal is to support struggling Arizonans who are “unemployed through no fault of their own.”

“The United States Senate kind of bailed out on them and went home,” he said. “They need to take action.”

To get the economy back on track, Kelly said, “we’ve got to look towards the future.” Beyond supporting the industries that are important to Arizona, such as tourism and trade, Kelly wants the state to “grow our tech industry and then train young Arizonans for the jobs of the future.”

This will only be achieved when government leaders “exercise some independence and are willing to work across the aisle,” Kelly said.

Are you concerned about the security of our election?

“We had issues last election cycle with the Russians interfering,” said Kelly, adding that other countries, including China, are trying to do the same thing in 2020.

“Folks in Washington, D.C., need to be focused on this, and we need to invest the resources to prevent interference in our elections,” Kelly said.

Although he’s concerned about the election, Kelly said, “if we remain vigilant, especially members of Congress … we can get through November.”

“We’ve got a history of racial inequity in our country. So we’ve got to improve the fairness in our education system, in our economy, in the way policing is conducted.”

There is a lot of work to be done, and it will take strong leadership to do it, Kelly said.

“The United States Senate needs to step up and work with the House of Representatives in a bipartisan way to pass legislation that addresses the issue,” Kelly said.

“That’s not an investment in our future,” Kelly said.

Some issues important to Kelly are the economy, the crisis in public health, immigration and border security, and climate change.

Solutions will emerge by investing in the future, he said, especially in education and advanced technology, but they can only be solved through teamwork and bipartisanship.

“You’re only going to solve these difficult challenges by working together as a team, and I really feel that Washington, D.C., often fails us in that regard,” Kelly said. “They generally become too partisan, too beholden to their political parties, too beholden to big corporations.”

Kelly said his campaign does not take money from corporate political action committees. Therefore, he will not be beholden to any corporations.

Kelly said he is committed to working across the aisle, like former Arizona Sen. John McCain, who was a Republican.

“I’m committed to working with Democrats and Republicans in a bipartisan way to solve these hard problems,” Kelly said.

Kelly is concerned about the United States’ position in the world, particularly when it comes to trade and alliances.

“We should be the leaders,” he said.

America’s position on the global stage has changed over the past few years, Kelly said. Improvements require upgrading U.S. ports of entry, working together with allies and creating trade deals that are fair to the U.S. All this will help better the economy, he said.

Kelly said he has “a different set of experiences than most,” from Navy captain to NASA astronaut.

In his 15 years at NASA, he said, he had “a history of working on some hard problems and solving them with teamwork.” Kelly said solving hard problems requires staying out of partisan corners.

Kelly said Arizonans appreciate independent leadership that focuses on the issues they are facing. He is committed to serving Arizona in this way.

Work-life balance is important to Kelly, but sometimes he becomes too focused on work and starts losing sight of other important aspects of his life.

Kelly, said his wife, Gabby Giffords, was very good at maintaining a work-life balance while she served in the House of Representatives for 2½ terms.

“She’d be out on her Rollerblades in Reed Park at midnight, rollerblading around the park because she felt she really needed that,” Kelly said. “She reminds me of (work-life balance) all the time.”

Please share a quote or piece of advice you live by

It’s “important to rely on your team,” he said, especially when you’re “flying a $2 billion spaceship at 25 times the speed of sound around the planet.”

Kelly often asked his crew members to question him and the decisions he was making while commanding a space shuttle.

If elected senator, Kelly said he will approach the job the same way.

“I’m going to value the input of the folks … who got me into office. I care about their opinion as to how I’m doing my job.”