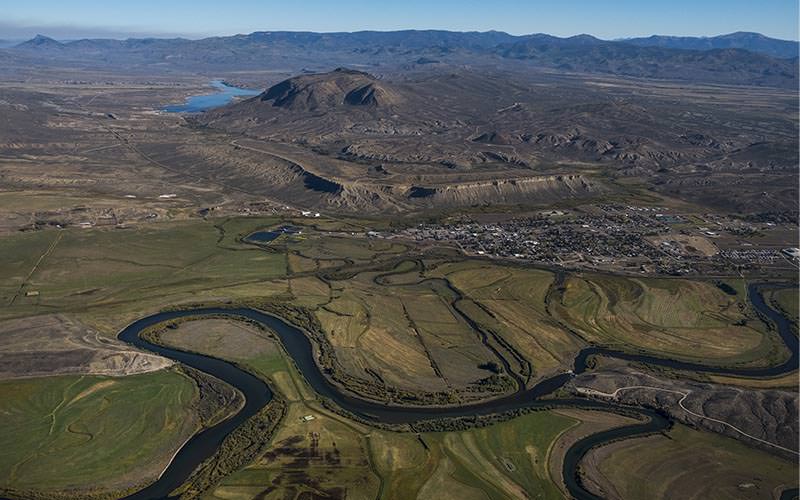 The Colorado River Basin is about to enter its 21st year of sustained dry conditions. This is an aeriel view near Kremmling, Colorado, in 2018. (Photo courtesy of Nick Cote/KUNC)

The Colorado River’s largest reservoirs are expected to keep struggling over the next five years due to climate change, according to the federal agency that oversees them.

The Bureau of Reclamation’s new modeling projections, which include this year’s record-breaking heat and dryness in some parts of the southwestern watershed, show an increasing likelihood of an official shortage declaration before 2026.

If dry conditions like the Colorado River Basin has seen since 2000 persist, the agency’s model shows an almost 80% chance of seeing an official shortage declaration by 2025. The chance of seeing the reservoir drop to a critically low level is about 20% in that same time period.

The basin is about to enter its 21st year of sustained dry conditions. The watershed is also rapidly warming, leading to increased evaporation from streams and reservoirs, and depleted groundwater.

The river’s water supply problems are exacerbated by the fact that cities, farmers and industries across the watershed have been overly reliant on the river’s water for decades. The supply and demand imbalance on the river has left its two biggest reservoirs – Lakes Powell and Mead – extremely low. Lake Powell is currently at 48% of its capacity. Lake Mead is at 40%.

Bureau of Reclamation commissioner Brenda Burman said even with Drought Contingency Plans in place, there’s a significant chance the reservoirs will drop even further by 2026. Those plans, signed in 2019, spell out a series of water cutbacks to users in Nevada, Arizona, California and Mexico.

“There is uncertainty and risk on the horizon. But the policy decisions we’re making have been made to address that risk,” Burman said.

Flows into Lake Powell this summer were about half of what they are in an average year. This year’s dismal runoff has only increased pressure on the Colorado River, Burman said.

“We knew we had risk in the next five and six years, and the drought contingency plans are meant to address that,” Burman said.

More than 62% of the Colorado River watershed is experiencing extreme drought at this time.

This story is part of a project covering water in the western U.S. and the Colorado River basin, produced by KUNC and supported through a Walton Family Foundation grant. KUNC is solely responsible for its editorial content.