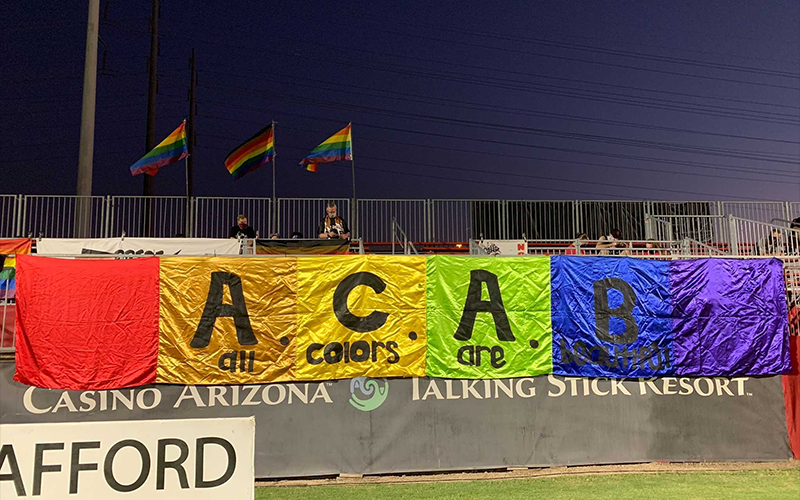 A banner hangs at Casino Arizona Field during a recent Phoenix Rising game in support of the LGBTQ+ community. (Photo courtesy Lorenzino Estrada)

The Phoenix Rising want to “move forward” after allegations of a homophobic slur said by Junior Flemmings and will accept the league’s findings. (Photo by Matthew Ashton AMA/Getty Images)

The USL Championship looked into the event that occurred last week against San Diego Loyal SC and shared its findings with Rising general manager Bobby Dulle.

“The results of the investigation from the USL were unable to confirm … if the slur was directed to anyone in particular,” Bobby Dulle said. “They do believe that inappropriate language was used on the field.”

The Rising said they will not appeal the decision but will look into it on their own.

“We are going to continue the investigation and defer to the USL,” Dulle said. “The USL did their due diligence and took their time interviewing multiple parties and we do respect their decision so we look to move forward from this.”

The team has no intention of abandoning Flemmings or Rising coach Rick Schantz, Dulle said.

“We do not throw people out at their lowest moments,” he said. “One, we wanted to let process play out and two, no matter the results of the investigation, both Rick and Junior are fundamentally good people with good values.”

The Rising has placed Schantz on administrative leave, but said the reason for the coach’s leave was not related to the incident.
A final decision on if Schantz and Flemmings will return to the club has not been made.

“Right now both are on administrative leave and both are going to take this time to reflect on what could have been different for them and acted differently,” Dulle said. “It will take time and (we’re) going to have to evaluate as an organization when we do feel ready. (Schantz’s leave) is indefinite and Junior for five more games but at the moment they will not be around the team.”

The situation is even more interesting for Flemmings whose contract is set to expire in November. Before the incident it appeared he may have the chance to move to a bigger opportunity with the quality season he had.

His future with the team remains uncertain.

“We are going to use these next two months to work with Junior and support him, plus educate ourselves but no decision has been made yet,” Dulle said.

The Rising will have to move forward and shift their focus on the playoffs, where they will face Sacramento Republic FC at home this Saturday in the quarterfinals.

They will be without top goal scorer Flemmings, who was awarded the Golden Boot by the USL with his 14 goals, and without Schantz, who will be replaced by Blair Gavin in his absence.