The NASCAR Xfinity Series, here at the Food City 300 at Bristol Motor Speedway, serves as the sport’s secondary division in which top-tier developmental drivers on the cusp of superstardom prove their worth to compete in the NASCAR Cup Series. (Photo by Sean Gardner/Getty Images)

PHOENIX – The NASCAR Xfinity Series playoffs have only just begun, but top title contenders Chase Briscoe and Austin Cindric are already analyzing the challenges that Phoenix Raceway could present in the season finale at the Desert Diamond Casino West Valley 200 in November.

Briscoe, who leads the playoff standings, and Cindric, who is drafting him in second, share a common concern. Neither was especially comfortable on Phoenix Raceway’s one-mile oval during the LS Tractor 200 there in March, when a PJ1 traction compound was used on the track.

“For me, Phoenix has never been a great race track by any means,” Briscoe told Cronkite News.

And Cindric said his team “definitely seemed to struggle” on race day in March.

However, Brandon Jones, who is lurking in sixth place in the Xfinity playoff chase, drove his Joe Gibbs Racing No. 19 Toyota to victory in the spring race, and believes the PJ1 compound might just be the edge he needs to pull an upset in the desert if he can reach the final weekend.

“I think we’re going to be really strong again if we get to that last round,” he said. “I feel that this year the PJ1 really played in our favor.”

The Xfinity Series serves as the sport’s secondary division in which top-tier developmental drivers on the cusp of superstardom prove their worth to compete in the NASCAR Cup Series. Think of it as the equivalent to Major League Baseball’s Triple-A system, except full-time promotions to the premier level aren’t granted until the end of the season. It’s essentially a year-long audition for athletes trying to reach the Cup Series.

The Xfinity Series “Big Three” of Cole Custer, Christopher Bell and Tyler Reddick were promoted to the Cup Series after last season, creating doubt about the level of competition and entertainment value the 2020 season would produce.

Turned out there was no need for pessimism. The Xfinity Series regular season was one of the most competitive in history with unlikely names rising to the occasion in a race for respect and redemption.

Briscoe has driven the Stewart Haas Racing No. 98 Ford to the top of the standings after dedicating his season to his wife Marissa and the child the couple lost to a miscarriage earlier this year.

Following NASCAR’s hiatus from COVID-19, he returned to competition at Darlington Raceway at the end of May, and he was at the track when he learned the devastating news in a FaceTime call. The next day, he held off two-time Cup Series Champion, Kyle Busch, to win on what he called “the biggest day of my life after the toughest day of my life.” 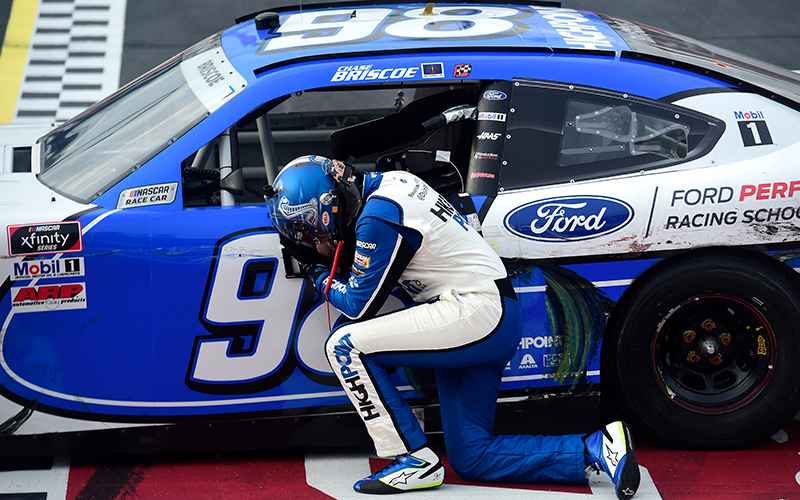 Chase Briscoe has a moment beside his No. 98 Ford Mustang following an emotion victory just one day after learning he lost his child to a miscarriage. (Photo by Jared C. Tilton/Getty Images)

He has now won seven races – more than any other driver in 2020. Points amassed throughout the season should propel Briscoe to a deep postseason run, but he expressed concerns about the championship race at Phoenix Raceway.

“I feel like ever since they put the PJ1 down on the top, I’ve been a lot more comfortable and confident at Phoenix,” Briscoe said. “We definitely still have some work to do setup-wise and, for sure, me as a driver-wise going there.

“I still don’t do the little things right, but truthfully for me, no practice at Phoenix is probably a little bit better of a thing. I feel like I can really steer us in the wrong direction there, and I’m confident my team is going to know what to do.”

The PJ1 traction compound is an adhesive sprayed along the top grooves of racing surfaces. The sticky substance is supposed to give drivers more grip in places they wouldn’t normally be able to run, allowing them to pass where they otherwise might not dare, which can lead to more exciting racing.

It’s designed to allow the kind of side-by-side racing officials have sought for years at Phoenix Raceway,

Running right behind Briscoe in the Xfinity Series playoffs is Austin Cindric, arguably the biggest surprise of the season. A road-course racing specialist, Cindric has always displayed potential but was never able to secure a victory on an oval track.

Once he broke that barrier by clicking off the first victory of his NASCAR National Series career at Kentucky Speedway in July, he won three events in-a-row. Over a 10-race span, the red-hot Cindric tacked on two more wins and recorded nine consecutive top-five finishes (he placed eighth in the other race).

With five wins under his belt, 22 top-five finishes and just five finishes outside the top 10 in his 27 Series races, the 20-year-old Cindric locked up the regular season championship and is on a mission to become the first Team Penske driver to win a title in NASCAR’s lower division since Brad Keselowski in 2010. 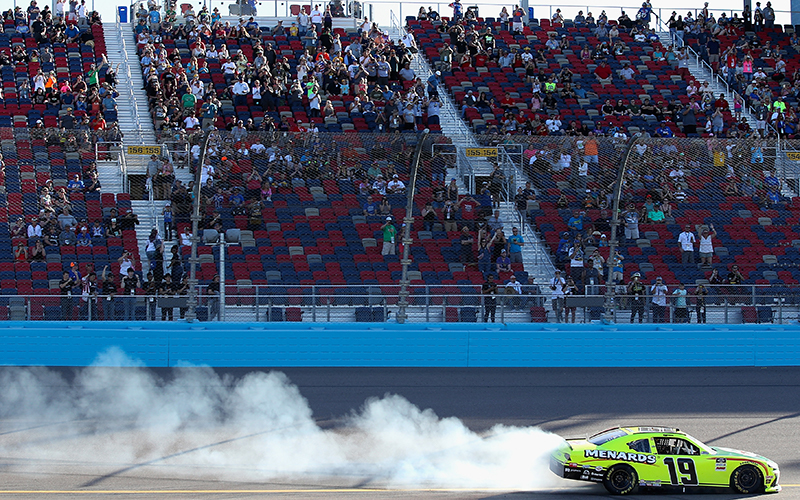 “I think Phoenix, honestly, wasn’t as great as we would’ve hoped for in the beginning of the year,” said Cindric, who finished eighth there in March. “We qualified well, ran well in the first stage, but once the track moved up (cars started running in the upper groove due to rubber being laid down), we definitely seemed to struggle.

“We really highlighted our weak points and took away our strengths. I feel like, as a team, we’re going to need to be aggressive to be in championship form there. But my team has been able to do that this year. I’m looking forward to that challenge – I think it will be a challenge for us, judging based off of how we ran there in the spring race.”

If Cindric and Briscoe are unable to solve the Phoenix Raceway oval, Jones is hoping to be there and play the spoiler’s role.
After passing the winningest driver in Xfinity Series history, Busch, with 20 laps remaining and going on to notch the win at Phoenix in March, the Georgia-native has made a convincing case for his ability to snag the title, should he advance to the final round.

The Toyota Racing Development driver has been able to capitalize in big situations all season, resulting in three victories. Riding back-to-back top-10 finishes, Jones is hoping to carry momentum and consistency throughout the playoffs, and feels great about his chances in Avondale come November if he can get to the finale.

“I put in some really good notes after that race on what I was doing to be really fast in the PJ1 and how many laps it took to find that, so that led to a lot of success there,” Jones said of the LS Tractor 200 in March. “I feel like we didn’t ever start that race out really strong. We continued to work on our car and got better, and I felt like that kind of led as well to maybe a little bit more longevity in our tires and led us to passing Kyle (Busch) there at the end.”

Jones has shown he has the ability to race for the title, but inconsistency has plagued the 23-year-old in 2020. With five October races still to go before the Nov. 7 championship race in Phoenix, anything is possible in the Xfinity Series playoffs.

By then, the 12 drivers who qualified for the playoffs will be whittled to a “Championship 4,” and Jones, who ranks sixth in the playoff standings going into the Ag-Pro 300 at Talladega Superspeedway on Oct. 3, is hoping to be among those top four drivers when he gets to Phoenix.