The Phoenix Suns’ Ty Jerome has spent time in a football stadium, like he did in 2019 when he took part in a celebration of Virginia’s national championship in basketball, but recently he tried his hand at fantasy football. (Photo by Ryan M. Kelly/Getty Images)

PHOENIX – Phoenix Suns guard Ty Jerome tried something for the first time in his career: a fantasy football draft.

The Water Bowl Fantasy Football Draft was an entertaining and competitive experience, but more important, the event raised awareness and money for education and clean-water programs in East Africa with Hoops 4 Humanity, a nonprofit initiative founded by the Indiana Pacers’ Malcolm Brogdon and the Brogdon Family Foundation.

“It has been wonderful,” said Jann Adams, the executive director of the Brogdon Family Foundation. “We wanted to find something that would be fun, that would allow fans, that would give folks a chance to learn about the foundation and the things we’re trying to do and would also allow all of the players in Hoops 4 Humanity to participate.”

Fans were invited to engage and compete with the NBA stars for a chance to take home the grand prize: tickets to the 2021 NBA All-Star Game in Indianapolis. Registration ranged between $150 and $1,000 and offered a wide range of perks.

While the draft was fun and games, the main mission was to promote the organization’s commitment to provide clean water and education.

“The idea was to create a foundation that would allow us to continue the water work and expand it, and also to do education,” Adams said. “That led us to another thing. As we got into education, we realized that we wanted to do more in the communities in Africa. We shifted from just doing wells to working with the schools, trying to help with infrastructure needs and literacy.”

More than 150 million residents in eastern and southern Africa are not connected to a safe water distribution system, according to the Centre for Public Impact. It is the main cause of diarrhea, which is responsible for the deaths of more than 250,000 children under 5 there each year. 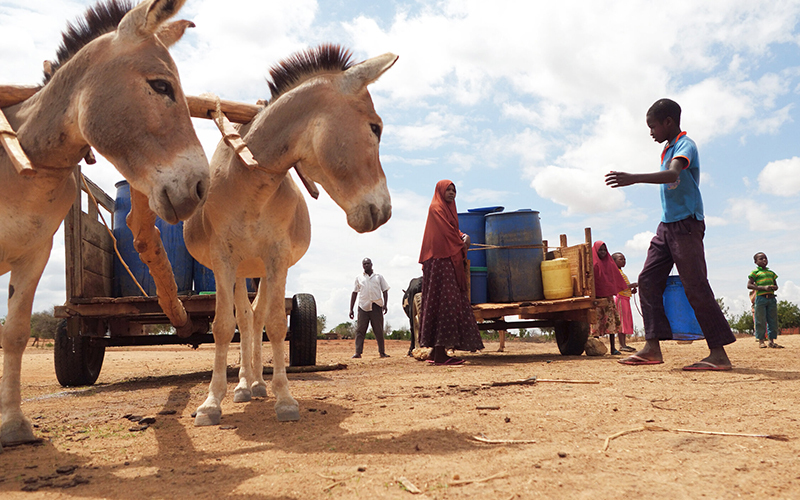 The event was for a good cause and more than 100 fans participated in the virtual fantasy football draft through RealTime Fantasy Sports.

Each NBA player was assigned a conference with fans getting the opportunity to pick which NBA players they preferred to compete against. After Brogdon introduced the panel of NBA players and shared a Hoops 4 Humanity video with the audience, the NBA players and fans split into Zoom breakout rooms to make selections and have friendly conversations.

“It was a great, diverse group to bring together for a special cause,” Jerome said. “It was just cool to interact with fans again. One guy had his son draft his team for him.”

Jerome, 23, wasn’t the only one getting his feet wet in a fantasy football draft. NBA players and fans alike were tackling the new experience with a competitive spirit.

“I’ve played football, but never fantasy football,” Tolliver said with a laugh. “This is for a good cause, so I’ll learn on the fly.”

Before the first overall pick could be snatched, Brogdon surprised all the guests with a one-on-one interview with New York Jets linebacker Avery Williamson, who shared some wisdom and encouragement with the draft participants.

“I think Malcolm Brogdon has done an amazing job putting this all together,” Jerome said. “He’s a great person and doing a great job in spearheading this event and the entire company.”

Brogdon, who earned his master’s degree in leadership and public policy at the University of Virginia, worked closely in East Africa to fund clean-water projects, expanding his knowledge of the plight of people who lack water to drink or with which to wash their hands during the global COVID-19 pandemic.

“You might not be able to take us on the court, but we hope you’ll give your best shot in the Water Bowl,” Brogdon said. “Clean water is needed now more than ever. That makes it a win all around.”