It looked different, but Arizona high school football made it through week one, with masks, social distancing and fewer fans.

Although masks were mandatory, not everyone chose to wear them at Cactus High School’s game against Sunrise Mountain. School districts had different rules. (Photo by Edwin Perez/Cronkite News)

PHOENIX – A temperature check awaiting fans at the gate. Friends, family and any other fans spaced 6 feet apart. Cheerleaders with their voices, if not their spirit, muffled by masks.

Most varsity football programs kicked off competition around the state Friday night while trying to observe Arizona Interscholastic Association guidelines and school district specific restrictions to avoid the spread of COVID-19.

While taking precautions, Cronkite News was on hand at three venues – McClintock High in Tempe, Corona del Sol High in Tempe and Cactus High in Glendale – when the season’s first whistles blew.

Protocols were similar, but not exactly the same at each game. Some required everyone in attendance to wear a mask except players on the field. Some schools allowed bands and fans to attend. Others restricted attendance to a couple of family members.

In what would normally be a packed stadium filled with cheering fans, chanting cheerleaders and finely tuned marching bands, McClintock played host to its long-time rival Tempe High in a mostly quiet setting. 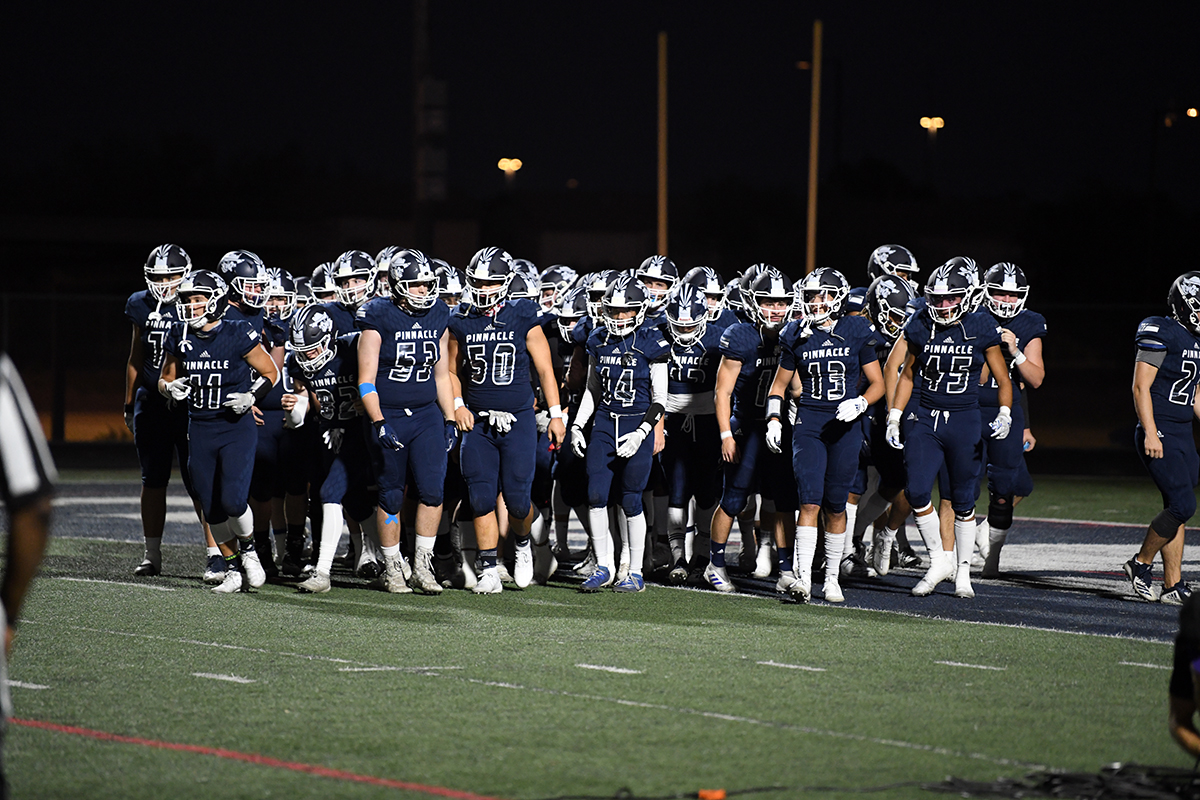 Pinnacle High School’s football team warms up before its season opener against Horizon High School. Because of attendance restrictions due to COVID-19, the game was played in front of a much smaller crowd. 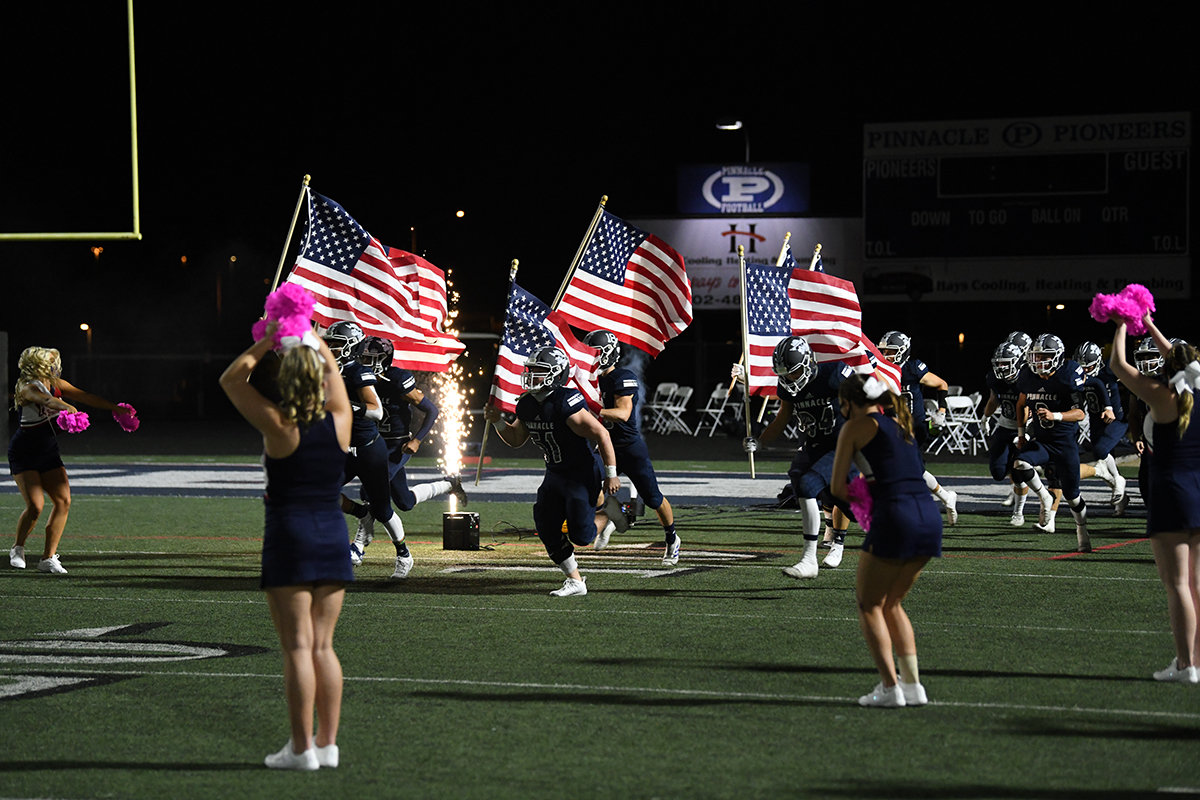 Pinnacle football players run onto the field holding American flags before their game against Horizon High. Fan attendance was limited but the school tried to maintain many of the traditions of a typical game. (Photo by Kevin Hurley/Cronkite News)

Left: Pinnacle High School’s football team warms up before its season opener against Horizon High School. Because of attendance restrictions due to COVID-19, the game was played in front of a much smaller crowd. Right: Pinnacle football players run onto the field holding American flags before their game against Horizon High. Fan attendance was limited but the school tried to maintain many of the traditions of a typical game. (Photo by Kevin Hurley/Cronkite News)

Cheerleaders still cheered, but there was a gap in the bleachers where the home team’s band and students would typically sit. Without them, the sounds of the game and the coaches communicating to their players drifted easily through the night air as 5A McClintock drubbed the 4A Buffaloes, 36-6.

While most parents were masked up and cheered for the players on big plays, the cheerleaders needed megaphones and a portable speaker to amplify their chants and accompany their dances with music.

McClintock cheerleaders Hailey Hatch and Amaya Tanhueco had experienced the football atmosphere in seasons before COVID-19, and they did their best to keep the sparse crowd engaged.

They said the cheer group had to remain 6 feet apart and wear masks, but could spread out to 11 feet and take the masks off to cheer. They explained that they were not allowed to toch each other unless they’re performing a stunt.

And Hatch said the cheerleaders were not supposed to touch another’s megaphone or pick up somebody else’s poms or share drinks.

“And we have to use hand sanitizer,” Hatch said.

On the sideline, players were required to wear a mask and stand next to a bucket designated for them. Masks were not required if a player took the field, although the Chargers apparently practice in them.

He missed having the support from the school and his friends, but he supports the protocols because they allow him and his teammates to get back on the field. He said the Chargers are used to wearing masks in practice. 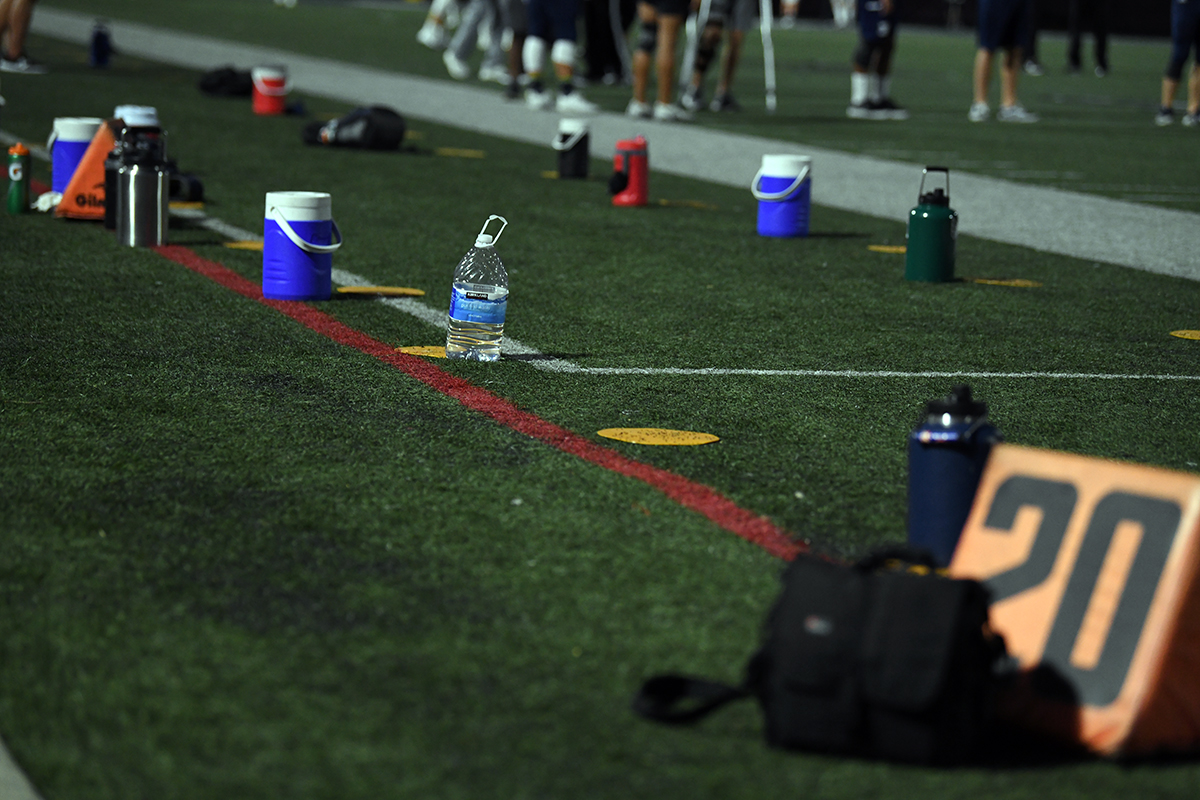 Pinnacle High football players space out their water jugs on the sidelines to promote social distancing before their game against Horizon High at Pinnacle High School. (Photo by Kevin Hurley/Cronkite News)

“The whole season we’ve been wearing masks. We got some flack on it awhile back for wearing masks at practice, but I don’t care what they say.” Roberts said. “People can think what they want to think, but we’re staying safe. That’s how we’re going to win. Whatever it takes to get a season going.”

Household members and media who attended the game were greeted by a Corona del Sol faculty member who asked “can I take your temperature?” rather than the usual, “may I have your ticket?”

That was followed by an admonition to remain at least 6 feet apart at all times.
at all times. The crowd was made up mostly of proud parents along with a handful of students, all sporting the school’s yellow and orange gear.

Cheerleaders and pom poms did not greet fans with a huge smile, at least not one that was visible. But they made their support known loud and clear while wearing masks.

“I think cheering with the mask isn’t that bad in my opinion,” said Aimee Bautista, a member of the school’s spirit squad, “but it could be hard doing some skills like tumbling and stunting.”

Although pom poms removed their masks before they performed a dance routine, they immediately placed them back over their nose and mouth after performing. The band, meanswhile, used only instruments that could be played without removing masks. So, no horns.

On the field, players wore masks while on the sideline unless they were able to move away from others to take a breather. On Desert Vista’s side of the field, athletes and parents followed the same guidelines.

Ryan Bartreau, whose son Kailob is a senior wide receiver and defensive back for the Aztecs, said football brings families together.

“And right now, going through everything and all these hard times, I feel like it’s the best thing that we can have,” the elder Bartreau said. “To have all of us rejoin and just come together, just come as one together again, that’s what football means to me.” 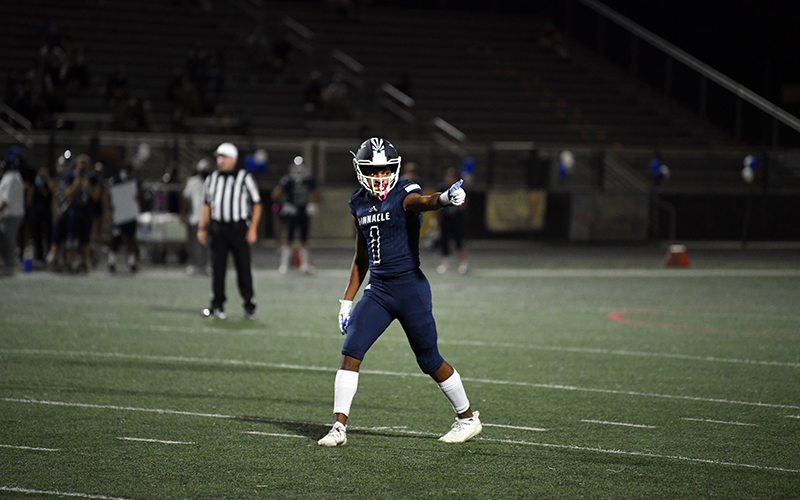 Pinnacle High senior wide receiver Dorian Singer gives the referee a thumbs-up during his team’s game against Horizon High. The players and coaches were excited to be back on the field. (Photo by Kevin Hurley/Cronkite News) 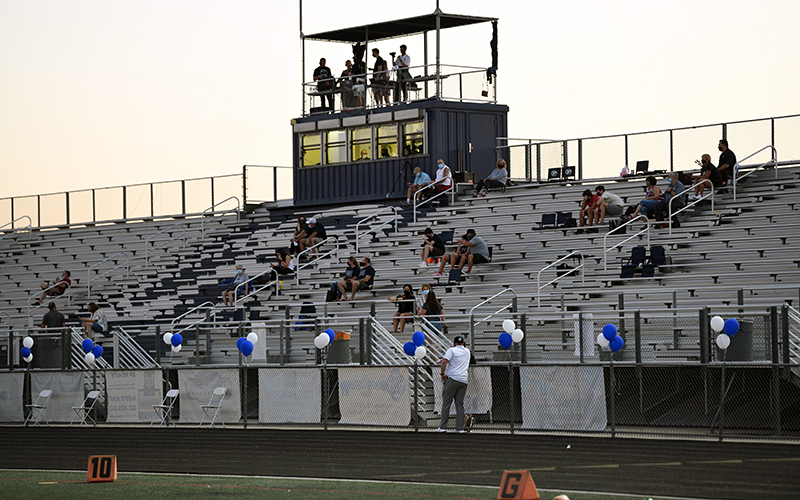 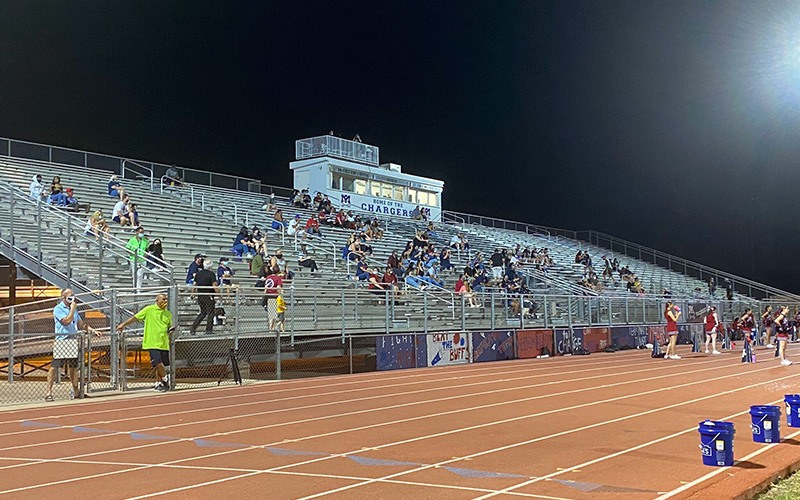 At McClintock High School, athletes were provided two tickets each. Each attendee was welcomed with a temperature check before entering. (Photo by Averi Roberts/Cronkite News) 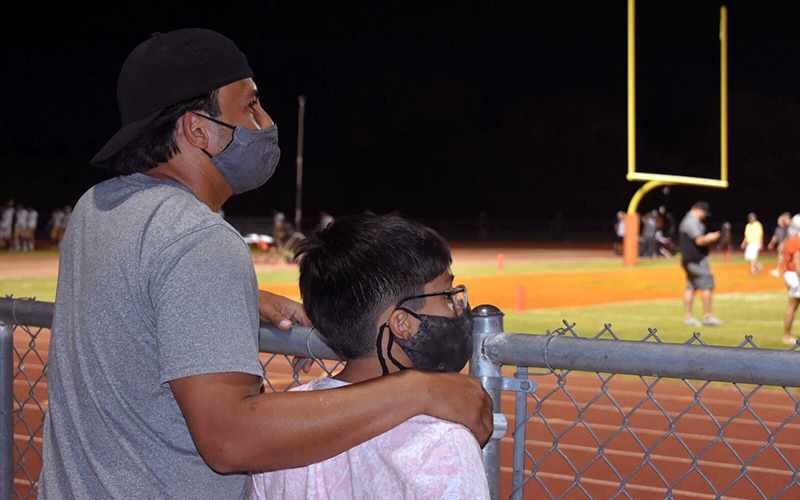 At Corona del Sol High School, some fans were able to stand close to the fence because there were so few others around them. (Photo by Frida Mata/Cronkite News) 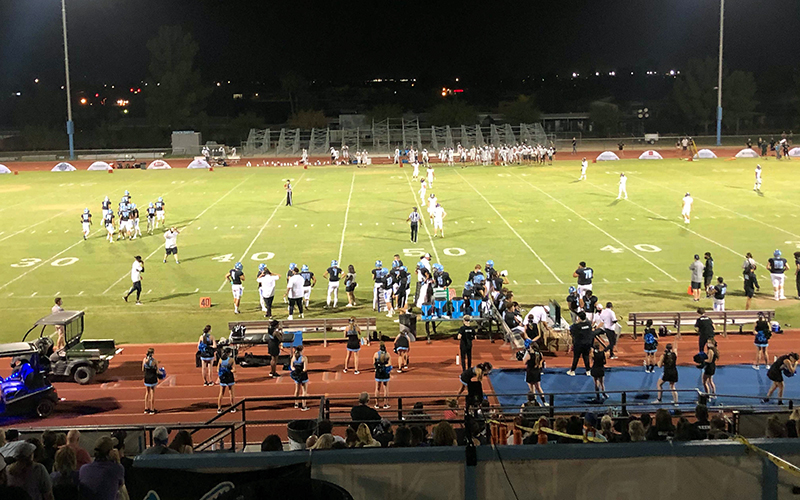 Fans, coaches and players were happy to be back in action when Sunrise Mountain and Cactus high schools met Friday night. (Photo by Edwin Perez/Cronkite News) 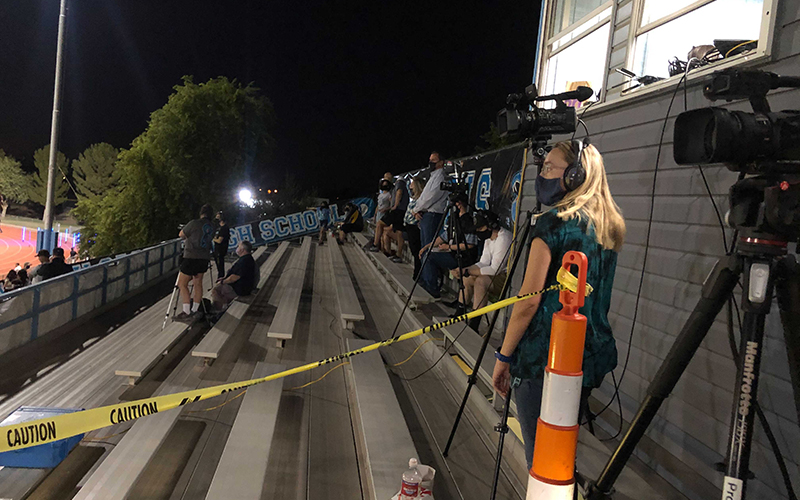 Members of the media were required to socially distance at Cactus High School. (Photo by Edwin Perez/Cronkite News)

Across town in Glendale, a sign at the entry gate to Cactus High School’s M.L. Huber Stadium reminds fans that wearing a mask inside the facility is mandatory.

This was true for cheerleaders, band members, coaches, referees and any staff or media on the sidelines. It even included any player not suited up to play.

Still, it wasn’t entirely enforced as there were quite a few fans in attendance who did not wear a face covering.

Social distancing wasn’t the best, either, because of construction in the stadium that required everyone to sit on the same side of the field. Home and visiting fans were separated by a yellow caution tape. Still, with supporters from both teams in one set of bleachers, some fans were not distanced, including some without masks.

Before the game, each team sent out only one team captain for the pregame coin toss. And once play began, there was, in a sense, a bubble for players and coaches with few allowed to be near the field.

Cheerleaders had to keep their distance and no media was allowed in the players box. Reporters were required to walk around where cheerleaders were located to get to the other end of the field while covering the action.

Still, those in attendance were happy to see the Friday night lights lit up again.

“It is just great for the players to be able to play when I thought this was not even going to happen at all,” one Sunrise Mountain fan said. “Sports have all changed but just to be able to come to a Friday night high school football game is a blessing.”

A Cactus High fan agreed, and he said he’s willing to observe the protocols if it allows the games to go on – even if the Cobras did fall, 48-7.

“At the end of the day, I am going to do my part and do what they ask for me because I want the rest of the season to happen,” he said.