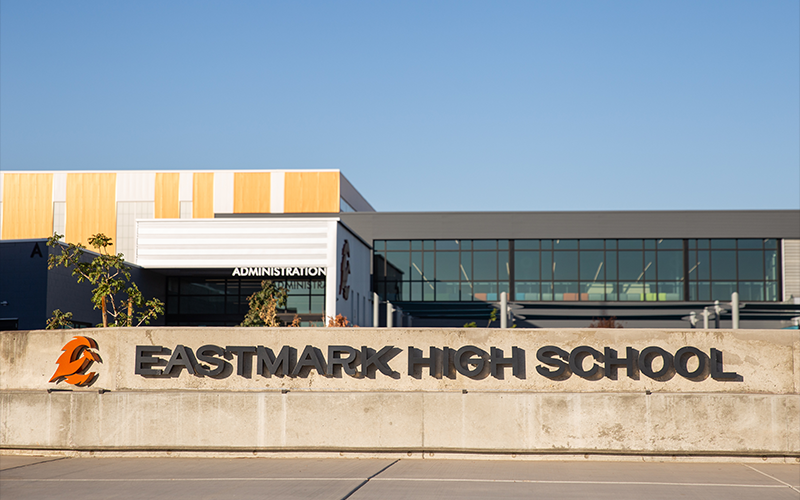 The growth of population in the Queen Creek School District led to the addition of Eastmark High School last year. (Photo by Allie Barton/Cronkite News)

MESA – Eastmark High School, which officially opened in August 2019 in Mesa, is expected to have a smooth transition into the AIA’s 3A Conference. Optimism surrounds the Queen Creek School District’s newest high school.

This is the first year of varsity sports for the school, which opens its football season tonight at Pusch Ridge Christian Academy Tucson.

FundIng for the school was the product of voters in the Queen Creek Unified School District who approved a $63 million bond package, as well as the repurposing of a 2014 bond, to allow the district to build the new high school as well as two elementary schools.

The district estimated at the time that the student population was expected to increase by more than 3,500 students over the next five years.

As the school awaits the completion of the weight room and locker rooms, coaches have already begun setting up their teams for success in the 3A conference.

“Our coaches range from first year head coach in some of our individual sports, all the way to a coach like (football coach Scooter) Molander, (baseball coach Shane) Hilstrom, and (basketball coach Joe) Babinski, who have 30-plus years of head coaching experience,” Leuschner said. “Having a flexible staff that is diverse in experience allows our coaches that have been around for a long time to learn new things from some of our younger coaches who just got out of playing, it allows our young coaches to learn some of the ethics and the values that are required to build championship-caliber programs that are sustainable, not just ‘flash in the pan’ or ‘one and done’ style teams.”

Not all Eastmark hires were expected, including softball coach Darryl Allen, who came all the way from Florida and did not know the Arizona softball landscape. But his interview made an impression on Leuschner with his vision of where he wants his program to be in five to 10 years.

Molander, meanwhile, already had established success at the Arizona high school varsity level. Molander coached at Brophy Prep for 13 years and led the team to two state titles in his first three years as head coach. His program also reached the state finals three times and the state semifinals five times, making the state playoffs in all but the last year of his coaching tenure.

“Scooter Molander, being a guy who knows Arizona football, did it at the highest level, won championships at that level, took a few years off, lives in our community and said, ‘Man, I got an opportunity to try and do this, and really challenge myself,'” Leuschner said. “And he’s built an amazing staff around him.” 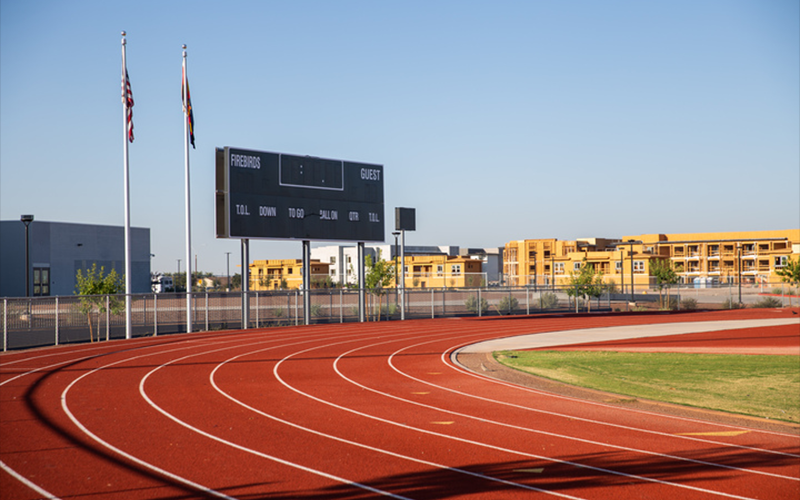 The growth of population in the Queen Creek School District led to the addition of Eastmark High School last year. (Photo by Allie Barton/Cronkite News)

Molander plans to build his football program by developing younger players, and like Leauschner, is open to any transfer students that will help the team but will not pursue them because of AIA bylaws.

“In terms of seniors, they’re not allowed in this year; we just have freshmen, sophomores and juniors,” Molander said. “I think that if we’re going about our business the right way, the word spreads of what we’re doing, and we certainly hope people would take a look at us in terms of a place that we intend to help the school culture, developing quality young people.”
Molander wants to “control the controllables” and let everything else handle itself, whether it’s bringing in transfers or winning games.

As the Firebirds football team prepares to take on Pusch Ridge, Molander considers his team to be more than prepared for their week 1 contest.

“We’ve been going six days a week, where we have film sessions and a lot of meetings, and coaches have been working really hard,” Molander said. “Our players are understanding of what we’re building. Pusch Ridge as a good program, they are pretty disciplined and we know that we have a big-time battle on our hands.”

Pusch Ridge is coming off of a 5-5 season in 2019 in the 3A South region, finishing with a No. 19 ranking in 3A. The Lions are an established presence that will provide a challenge to the Firebirds in their first game as a football program.

Babinski is another coach who brings 30-plus years of coaching experience. He believes he has to do more as a coach to compensate for lack of upperclassmen in order for his program to establish relevance in the 3A Metro Region.

“I’ve coached teams that didn’t have seniors on it,” Babinski said. “So, it’s doable. We’re already having our (older) basketball (players) lay the groundwork down because younger people don’t understand work ethic. They need to be led a little bit more. And the only problem is without having seniors is that they have nobody above them to be that example. I think a lot of communication is going to go a long way.”

Babinski’s offseason roster is thin right now because of football, but he is confident about his team once the football season concludes.

In addition to the importance of high-level coaching, Leuschner believes it is important for freshmen to have a quick learning curve and great leadership skills because many of them will be on varsity earlier than normal.

“It’s critical,” Leuschner said. “The thing that’s really fun to watch with our young athletes is our freshmen and their learning curve for leadership. They’re just so malleable, fresh, and impressionable that, in a lot of ways, coaching a freshman on varsity is easier because they buy in quicker.”

Leuschner’s main goal in 2020-21 for his athletic program is having athletes put forth their best effort and just compete. He knows the result may not always be ideal at a new school competing in varsity athletics for the first time.

“Compete as hard as you can every single day,” Leuschner said