High school football around the state begins this week, allowing players the opportunity to showcase their skills for college recruiters. Not all states will have that opportunity. (File photo by Fabian Ardaya/Cronkite News)

PHOENIX – Many high school seniors competing in fall sports have aspirations to play in college. For those in states where sports are on pause because of the COVID-19 pandemic, that goal might be difficult to reach if they don’t already have offers.

But for high school athletes in Arizona, those dreams remain attainable.

“We’ve had three guys that have committed already and 24 guys (on our team) that have Power Five, (lower) Division I, Division II, (and) Division III offers,” Chandler High School coach Rick Garretson said. “Being able to play and show what they can do as a senior (is important) because I think your senior year is without question your best year. You’re the biggest and the strongest and the most experienced that you’ve (ever been).

“It’s gigantic that the kids are going to be able to play and have an eight-game season and then put together whatever string of playoff games that we have there as well.”

Sixteen states, including five in the West and Southwest – California, Oregon, Washington, Nevada and New Mexico – have opted to not play sports in the fall, according to the National Federation of State High School Associations. Twenty one are modifying their season, including Arizona, with shorter schedules and later starts. That leaves just 14 with no changes.

Although Brandon Buckner, Chandler’s outside linebacker, is committed to Oregon, he said this season is still very important to him, despite already knowing what his near future football career will hold.

“I feel like it’s pretty important, just solidifying and seeing all my four years of coming through Chandler,” Buckner said. “Just putting the icing on the cake, just playing well last season with my friends, just going out and get in another championship, and just accomplishing our goals and expectations that we have for this year.”

Buckner seemed more excited for his teammates than he was for himself now that they know they’ll be able to play this season. 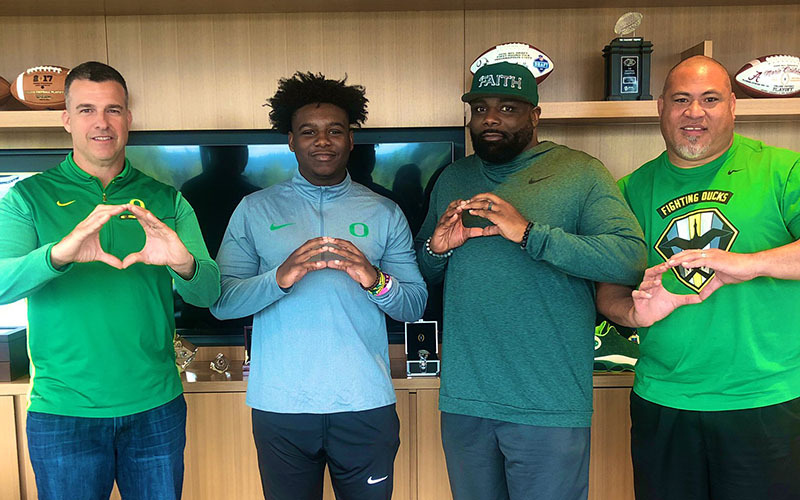 Chandler High School’s Brandon Buckner (second from left) was able to take an in-person recruiting visit to the University of Oregon, where he has committed to playing football. Because of COVID-19, other high school players aren’t as fortunate. (Photo courtesy Brandon Buckner)

“It’s going to be helpful for them to show off their own talents and abilities,” Buckner said. “Because we are going to be able to play this fall, so I’m just happy to see all of them succeed and just see on-ball out this year. I feel like they’re really going to step up and just make plays on Friday nights.”

“The college coaches have had a chance to really sit down and evaluate, I think film, that maybe in the past, they haven’t been able to do so,” Garretson said. “It’ll hurt some kids, not having college recruiters on campus, like in the springtime when they can actually eyeball them and see what they can actually do in a live situation.”

Many college coaches had more downtime in the spring and into the summer due to the coronavirus pandemic and offseason training restrictions. The recruiting process for the next year or so will shift more to watching recruits’ film instead of watching them live in person.

And Arizona State coach Herm Edwards understands how this can cause angst for some athletes.

“The thing that I’m learning probably more than anything else is a lot of these young men are worried about maybe in their area, there might not be high school football,” Edwards said.

“So kids now are committing a little early. Because they might not have senior film if there’s no football. Now, and I think this, too … if they can’t make any visits and I want something in my hand right now, say, I’m committing, and if it opens up, then all of a sudden I’m back into recruiting mode I want to go take some visits, right? That’s what we’re all at right now, to be quite honest.”

Could ASU and Arizona use this as a recruiting advantage? Eight Pac-12 schools are in states that will not play fall sports.

Arizona high school players will try to make the most of the situation.

“Your film is your resumé, and our kids are fortunate to have the technology, with our huddle system and the highlights that go along with it to show what they can do on the field and then ultimately get to film themselves as a senior if they haven’t made a decision yet,” Garretson added.

Chandler has been with its players since June 8 with the exception of two weeks. Strength-wise, Garretson said his team is where they want to be from a strength and conditioning foundation.

As for golf, the recruiting scene has been very different during the pandemic. Brophy golf coach Jon Shores and his seniors are adapting.

“I just approached this year with an asterisk on it because we all know that 2020 is going to be the COVID-19 year and lots of crazy things have happened,” Shores said. “I think that’s especially tricky for seniors with what college is going to look like and then those that want to play college sports.”

As a 2020 graduate of Brophy and current golfer at St. Mary’s College, Zack Missigman admits that his recruiting process would have looked a lot different had he graduated a year later.

“A lot of big tournaments got canceled for this summer because of COVID-19,” Missigman said. “I think college coaches would have to rely more on past events, instead of big events that got canceled.”

For an individual sport like golf, much of the recruiting happens away from the high school team matches. Almost every elite high school golfer in Arizona competes on various junior golf tours, which is where they get their recognition and attention from college coaches.

“I think so many colleges don’t look to high school coaches or high school seasons to make their decisions on whether they’re going to offer a kid a scholarship or not,” Shores said. “So many of the kids that do get college scholarships are kids that play the junior tours locally and nationally. And I think that’s where they really get their name out there.”

College coaches have very few interactions with high school coaches, instead contacting the golfers directly. Fortunately for high school seniors, most junior tours resumed tournaments this summer, allowing college coaches to watch the leaderboards. Since golf is such a socially distanced sport naturally, it has probably had the smoothest transition of all sports when it comes to navigating the pandemic.

Technology has also played a major factor in college golf recruiting. Coaches can theoretically skip the junior and state championship tournaments and instead monitor an athlete’s play by viewing scores online.

“Because of this age of technology, I could talk to a coach in five minutes,” Shores said. “And then in two hours when we have our match at Phoenix Country Club, I could take two videos of the kid, the kid’s swing, I could video him playing an entire hole, and I could send that to the coach right away. And that coach is going to get a pretty good idea of what this player’s capable of.”

Some coaches like to see a player’s swing but what’s going to matter the most are the scores – which highlight reels sent in by players can’t cover up. Shores elaborated on the importance of scoring well no matter what a player’s swing looks like.

“I’ve seen a lot of golf swings, some of them have been really fundamentally sound swings, but the kid can’t score to save his life,” Shores said. “And then other swings are unique to that individual. It’s not the prettiest swing. It’s a unique swing. It’s fundamentally sound, but it doesn’t look pretty. And that kid knows how to score. And I think college coaches are more concerned with looking at the scores because scores don’t lie.

“A pretty swing can trick you and deceive you. But scores don’t lie in golf,” he added. “And if a kid can go out in a tournament and post sub-par rounds, regardless of what that kid’s swing looks like, that coach is going to know the player knows how to compete and score. And if there are fundamental things in the swing that the coach may not like, he knows that he can work with that player and tweak some of those things to reduce some errors down the road with that kid’s performance.”

Missigman, the Brophy alum, had a few pieces of advice for the class of 2021 golfers who are trying to get recruited by colleges during this pandemic.

“Just try to get their name out there as much as they can, just sending emails to as many coaches as they can and play well, and the tournaments that they do play, because tournaments are kind of sparse right now,” Missigman said. “If you play well, on any tournament site, you can play and right now, it’ll do a lot for your recruitment.”