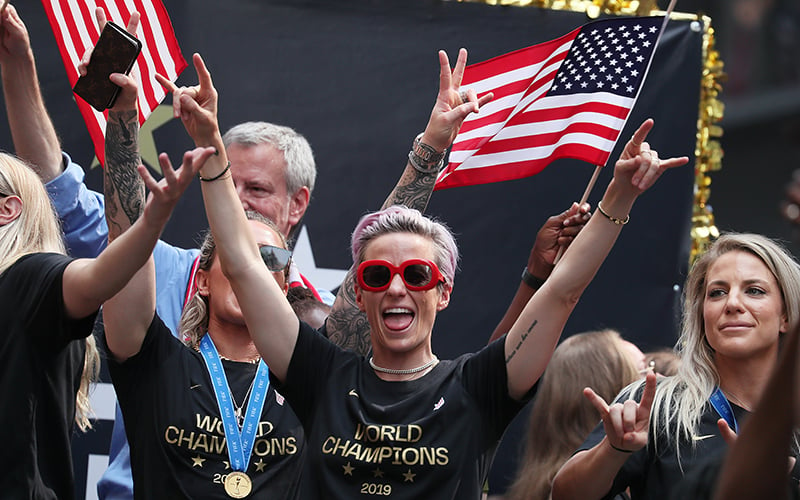 After winning a World Cup in 2019 that thrust Megan Rapinoe and other members of the U.S. women’s national soccer team into the spotlight, COVID-19 hit, slowing progress the sport had been experiencing. (Photo by Al Bello/Getty Images)

PHOENIX – With the U.S. national team en route to its fourth World Cup championship in 2019, women’s soccer reached its zenith in popularity. It was the most watched ever, reaching more than 993.5 million individuals for at least a minute on television, and 1.12 billion viewers across all streaming platforms.

Using that World Cup success as its catalyst, international women’s sports were on the rise and women were standing up for more representation in media, better pay and equal rights as their male counterparts.

The timing for a worldwide pandemic could not have been worse.

“Knowing what women have had to take on in order to just play sports, it (the pandemic) seems like this cruel irony,” said Victoria Jackson, a sports historian and professor at Arizona State University.
Jackson recently led an ASU Convergence Lab event, a panel joined by three international futbol athletes. They talked about tackling the pandemic, the eventual retirement from the game, and what they hope to leave behind for girls following in their footsteps.

Deloitte, the largest professional service organization in the world, in their sports industry outlook named the rise of women’s sports the number one trend in sport in 2020. That was before the impact of the pandemic could be calculated.

The players agreed that being patient and persistent with their individual training along with fighting for continuous exposure of their sport and teams is how they got through the lockdown. Women’s football has been on hold since Feb. 29. 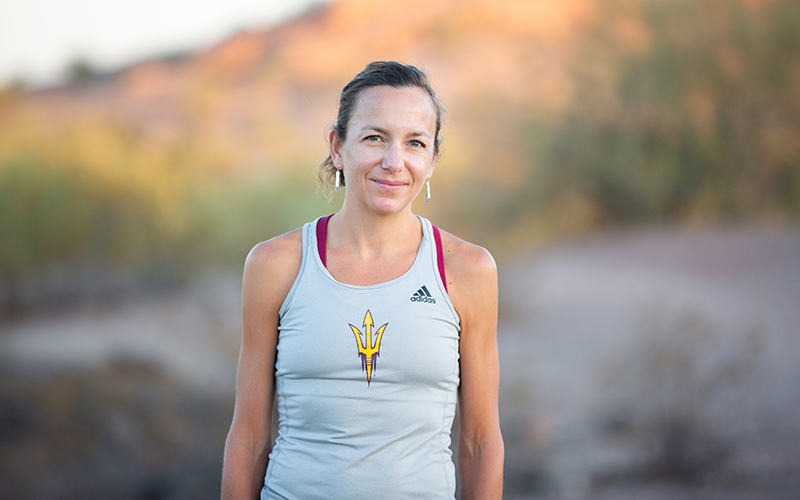 “Hustle is in the DNA of women athletes,” said Victoria Jackson, a former Sun Devil athlete who won a NCAA National Championship in the 10,000 meters. Jackson is now a sports historian and professor at ASU. (Photo courtesy of Arizona State University)

“Trying to be determined and still want to work hard and do your workout knowing that you have two or three more months to touch the ball again. I think that was the biggest struggle,” said Caprice Dydasco, a defender and midfielder for Sky Blue FC in the National Women’s Soccer League.

Karen Bardsley, a goalkeeper for Manchester City and the English national team, said the lockdown felt like an extended preseason and the most difficult part was not about playing but making sure that the women’s teams were not forgotten.

“I became a part of the Women’s Trust,” Bardsley said.

The Women’s Sports Trust was founded to increase visibility and the impact of women’s sports. They work to increase media coverage, improve funding, and promote diverse athlete role models.

“We had discussions over the course of the four months about what we can do to try and make sure that the media is seeing positive coverage of the things we were doing to make a difference,” Bardsley said.

Bardsley played in the Women’s FA Community Shield, the first soccer match in England after pandemic restrictions were loosened.

“In regards to playing in empty stadiums, the Wembley situation was just so strange,” Bardsley said.
The women’s Community Shield had not been played in 12 years. Its return was to provide more coverage of women’s soccer.

“It almost felt like it detracted from the occasion,” Bardsley said. “And although it was a really big moment, it just seemed really sad.”

In 2019 Bardsely was also named for the third time to the squad for the FIFA World Cup team.

“I don’t think there’s a larger stage, obviously, than the World Cup, perhaps maybe the Olympics, but on global terms, definitely not,” Bardsley said.

“It’s virtually impossible to talk about women’s soccer in the United States without mentioning the 1999 Women’s World Cup,” Jackson said.

With 90,000 fans in attendance at the Rose Bowl in Pasadena, California — in what remains the largest crowd ever to watch a women’s sporting event — the United States defeated China, 5-4, on penalty kicks to give the U.S. women’s their second world cup title. 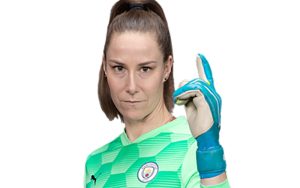 During the time of the pandemic, goalkeeper Karen Bardsley became the first professional footballer to sit on the Manchester Football Association board of directors. She hopes to initiate policy changes for women and girls soccer at the highest level of both play and governance. (Photo courtesy of Manchester City and England National FC)

“Did that (the World Cup) influence you and the way you approached the game?” Jackson asked Bardsley.

“What the U.S. soccer team has done is really just unparalleled,” Bardsley said. “So to be a part of that and to see the heights that the game can reach was something really aspirational for me.”

Bardsley hopes to give the same experiences she has had playing in the U.S. to girls internationally.

Daniela Solis, a forward for Liga MX Femenil Club CF Monterrey, is hoping to do the same in Mexico.

“To me, just as a pioneer in this new league here in Mexico (Rayadas), it’s just opening up the pathway so that they (girls) can actually live off soccer,” Solis said.

Solis said there is a great opportunity for the next generation of women’s athletes in the new league in Mexico.

“I’m positive that more players here in Mexico are going to go into international fields just to show off their game because there’s a lot of talent here,” Solis said.

Dydasco, who grew up in Honolulu, said Hawaii was far removed from the soccer world and after her professional career she hopes to change that.

“I want to go back there and just create a training environment,” Dydasco said. “The soccer world in Hawaii is just like family. I would love to go home and give back.”

Dydasco played with California teams to be seen and eventually played at UCLA.

“I would love to get the NWSL, or any women’s pro league, and invite college coaches to put on camps in Hawaii, just for them to be seen and give them opportunities to go to college,” Dydasco said.

“I love being involved with the team,” Bardsley said, “but for me being able to share my knowledge and help and mentor was a big box that needed to be checked.”

Bardsley and Jackson agreed that “you cannot be what you cannot see” and that when players have more women coaches they begin to believe they can coach, too.

Solis, who is currently pursuing her master’s degree in sports management at the Johan Cruyff Institute of Barcelona, wants to use her education to further her sports career.

“I have always said sports and education go hand-in-hand,” Solis said. “One of my goals is to produce commercials for Nike, Adidas, or Puma.”

Solis said that whether she is working as a club director or in logistics, she hopes to be in the sports industry long after she retires.