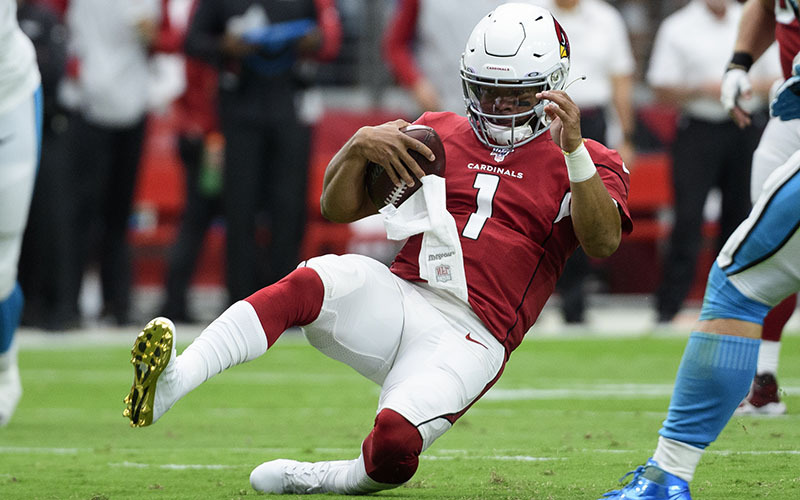 PHOENIX – The Arizona Cardinals are undefeated. Say it again, slowly, because Valley sports fans can use a reason to get excited.

True, it’s only the third week of the NFL season, and a 2-0 record hardly means it’s time to break out the playoff pompoms. Will Kyler Murray’s dangerous yet highly entertaining (and effective) running style lead to disaster? Will coach Kliff Kingsbury continue to fret every time his young quarterback slides for a first down?

No matter how the season spins, fans are thrilled to see 2019’s No.1 draft pick deliver.

Murray demonstrated his athleticism after completing 26 of 38 passes for 286 yards with a touchdown and an interception in the Cardinals’ 30-15 over Washington Sunday in Arizona’s home opener at State Farm Stadium.

“He is running more aggressively, he is getting vertical more than getting out of the back of the pocket like he did last year,” coach Kliff Kingsbury said. “That was a point of emphasis for us because he is one of the most dangerous people probably in the league when he is in an open field like that. He is allusive as anybody and that’s a weapon. He just has to be able to protect himself which he does a good job of.”

Murray’s big plays wouldn’t have happened without Larry Fitzgerald and DeAndre Hopkins, two wildly different receivers with whom the quarterback has developed smooth connections.
Hopkins hauled in an impressive 22 catches, establishing an NFL record for most receptions in a player’s first two games with a team.

“Those are two of the best receivers to ever play the game of football and I think there’s a reason for that,” Murray said. “They’re reliable, they know how to get open, they know how to use their bodies, they have great hands. They are who they are and I’m glad they’re on my team, hopefully we can keep that going.”

Hopkins marveled about the dynamic Murray brings to the offense, even when plays appear to be falling apart.

“He can go and score from 20, 30 yards out,” Hopkins said. “It’s something that is hard for defenders to be able to attack when you have a quarterback like that, that is looking to score and not just getting a first down.”

Although they have put up impressive numbers, Kingsbury remains unimpressed and believes his offense still has more to give as the season unravels in upcoming weeks.

“We had some big plays here and there, but I just feel like we have not hit our stride yet and we got to keep working,” Kingsbury said. “We got to play cleaner and keep those drives going, but a lot of guys made big plays in crucial situations that allowed us to get that victory.”

After getting a taste of the new normal – limited and manufactured noise, no rabid pockets of screaming red-faced fans at home games – the Cardinals coach thinks not having a crowd of actual cheering fans in the stands has affected the mood in the arena.

“You come out, it’s empty. I mean there’s nothing going on so you gotta create your own energy. And there’s no doubt we miss those guys,” Kingsbury said of the home crowd. “This environment can be one of the most intimidating and one of the best in the entire world honesty. Not to have them is tough but I’m hoping sooner rather than later we’ll get those guys back and be able to enjoy the red sea because they definitely give us a huge boost.”

Kingsbury’s wish is being granted, slightly. When the Cardinals put their winning streak on the line Sunday at home against the 0-2 Detroit Lions, a spattering of real live spectators will be in attendance. After receiving approval from the Arizona Department of Health Services and the Maricopa County Department of Public Health, the team said Tuesday, the Cardinals will be allowed to host a “small controlled group” of fans limited to 750 people.

Serving as a test run for future games, this group will consist of immediate family members or close friends of Cardinals staff, players and coaches. It might just be a wave compared to the usual red sea, but it’s also one more step forward for fans to return to in-person viewing.