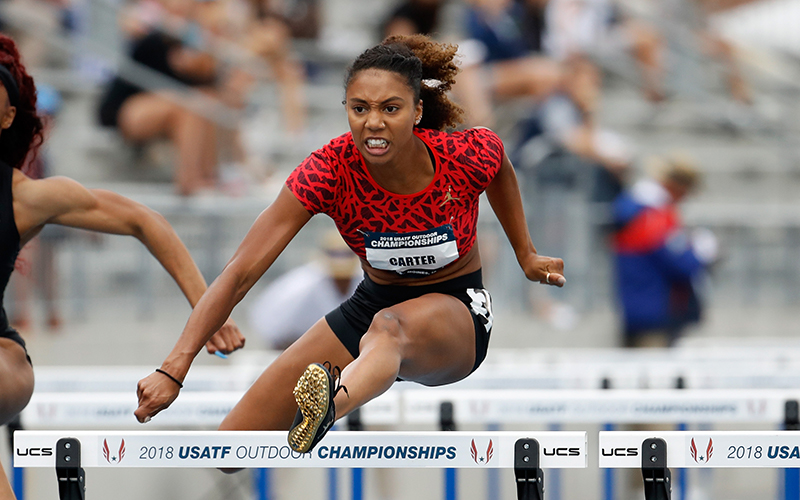 Former Pac-12 track athlete Kori Carter has the “grandma rule” on social media. “If you would be embarrassed if your grandma saw it, then you probably shouldn’t post it.” (Photo by Andy Lyons/Getty Images) 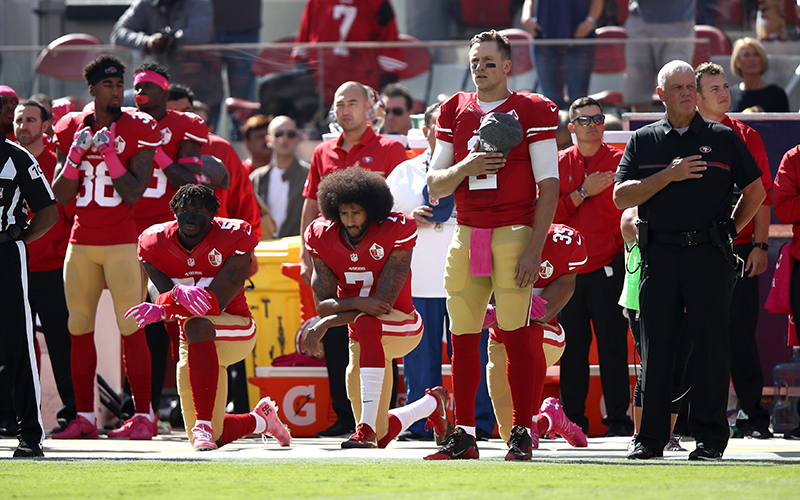 Former San Francisco 49ers quarterback Colin Kaepernick divided a country when he chose to kneel during the national anthem. He later earned an endorsement deal from Nike. (Photo by Ezra Shaw/Getty Images)

PHOENIX – When the NCAA Board of Governors voted unanimously to allow athletes to make money off their names, images and likeness, it presented an interesting challenge: Navigating the murky waters of activism and branding can be tricky.

With that bold change taking effect next year, athletes are being encouraged to build personal brands while they are in college to maximize their audiences, followings and exposure. They are also being advised on using their social media platforms to amplify their voices in the fight against racial injustices and social issues.

Zach Soskin, the co-founder of Voltage Management, a company focused on brand management, marketing and content production, tells athletes that even if speaking out costs them fans, it’s more than worthwhile to use their voice.

“Even if it might cost you a fan or two, or there is an employer that disagrees with it, you should still have your own value system,” said Soskin, who works with athletes, helping them to build their personal brand, which includes but is not limited to their activism.

“The idea of athlete empowerment and them not just being cogs in a machine is very much there. There is plenty of room to play in between making your coach mad, just being a number, and using your voice.”

But there is a downside to potentially voicing your opinion to hundreds of thousands of people on social media.

“The truth is you can have opinions and they can be popular opinions, but they are not going to be popular with everyone,” Soskin said.

Recent high-profile examples in the sports world illustrate how divisive taking a stand can be. When then-NFL quarterback Colin Kaepernick refused to stand for the national anthem in protest of police brutality and racism, criticism was loud and fierce. Two years later, he signed a multi-year contract with Nike, whose campaign with the athlete on TV, radio, online and social media was worth $163.5 million in brand exposure, Apex Marketing told CNBC.com.

Arizona State football coach Herm Edwards said that he has encouraged his players to speak up when they witness moments of injustice or racism.

Arizona State football coach Herm Edwards said he encourages his players to speak up when they witness moments of injustice or racism. (Photo by Bella Sisneros/Cronkite News)

“We encourage them to use your platform,” Edwards said. “But here’s the deal: be a voice of reason and solutions.”

“Young people know they have a voice. And they’re not afraid to use it. Whether they’re athletes, whether they’re college students, it doesn’t matter. They want to be heard.”

“We have freedom of speech but it does not mean that your speech is free of consequences,” Soskin said. “But just being a good person online should just be a no-brainer.”

Since the NCAA’s Board of Governors vote in April, the next steps are to draft legislation. The new rules will go into effect no later than the 2021-22 academic year.

To prepare for this new financial opportunity, Soskin said, student athletes need to prove they are a great fit for brands and sponsorships. To do that, they have to show what makes them more than an athlete.

“They have to start treating themselves like a brand,” Soskin said. “If they want to maximize their earnings they have to show what is going to make fans love them more than the player next to them.”

Kori Carter, who is both a USA Track and Field and a Jordan Brand athlete, said she treats her social media as “business media.”

“It (social media) is more for me Kori Carter the athlete, to connect with my fans,” Carter said. “I have to understand this is for them and not me.”

Carter’s social-media strategy is to make connections with her fans while still being selective with what she shares. And she advises student athletes to do the same.

“I have the grandma rule on social media,” Carter said. “If you would be embarrassed if your grandma saw it, then you probably shouldn’t post it.

“My agent told me you want fans to get the sense that they know me, but you don’t actually know me,” Carter said.

What about her thoughts on social media and athlete activism?

“We are leveraging our power and influence to enact social change, which I think is dope,” Carter said.

She said that in the past athletes used their influence to sell products or services and now they are focusing on more than just the capitalistic side of sports.

“As athletes we are lucky because we have such a larger sphere of influence,” Carter said. “That is why activism and speaking out for what you believe in is important.”

And for athletes, that voice is even louder in numbers.

“When you see what has been happening lately with the NBA and you are able to be a voice as a collective and protest as a collective, that is really powerful,” Carter said.

“You are not one voice just yelling into the abyss that is the internet. We are actually teaming up and getting things done,” she said.

Today, we all live on the internet. Whether our feeds are filled with selfies, or dogs, or the latest celebrity gossip, and or sports news, we like to see and hear what others have to say.

“If you are a college athlete, people want to talk to you,” Soskin said.

“And if you really want to make a difference, are you willing to say something and not stay inside? That’s up to you,” Edwards said.

This shift in branding power from school to athletes could affect the way that social media and activism are looked at for years to come.