Sunset Park, home for a variety of youth sporting events, sits on the west side of Wickenburg. The outfield features a backdrop of scenic mountains, and planes occasionally buzz overhead from the local municipal airport.

Now it also houses a four-field complex named after one of the Arizona Diamondbacks’ longest tenured players, David Peralta.

The Venezuela native, with help from the Arizona Diamondbacks Foundation and APS, recently refurbished the ballpark with LED light fixtures, dugouts and an electronic scoreboard in an effort to provide a place for children to play baseball.

“I have to thank the D-Backs organization, because they helped me with everything and they helped open the doors to be who I am right now,” Peralta said. “I will say, not many people get that big honor to have your own field with your name, and for me and my family, when we got the news from the Arizona Diamondbacks Foundation, it was really special.”

The contributions by Peralta and his wife, Jordan, to the Valley and his native country are frequent. Between regular visits to school, hospitals, veterans centers, and tackling serious issues like hunger, their presence has been felt in Arizona for years.

For those reasons, Josh Rawitch, the Diamondbacks’ senior vice president of content and communications, feels the pairing of the Peralta family and Wickenburg is a perfect match. 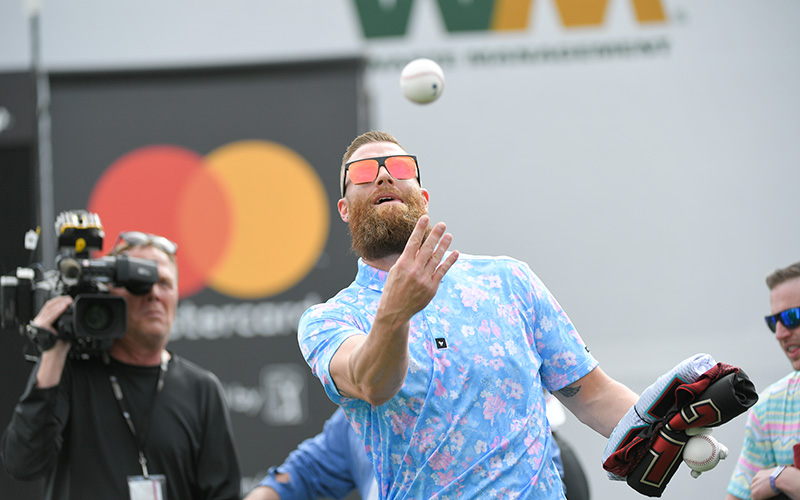 “David has demonstrated since his earliest days in the organization an interest in genuinely giving back to the community, both in Arizona and his native Venezuela,” Rawitch said. “Because of that, he was a natural fit to approach about lending his name and legacy to one of our Diamonds Back Fields and we’re very grateful that he not only made the financial commitment to do so, but that he specifically asked to take a trip to Wickenburg last week to see the field, even amidst the pandemic and returning home from a road trip late the night before.”

Vincent Lorefice, town manager and vice president of the Wickenburg Little League, said the town applied for a grant the past seven years. He believes this opportunity came to fruition as a result of persistence and continued substantial investments in the ballpark.

While the complex already generated significant revenue for the community, Lorefice is confident that having Peralta’s name attached puts Wickenburg on the map and the potential for economic growth should increase.

The economy of Wickenburg, which has a population of about 8,000, is primarily based on tourism, second-home residents and retirees and medical facilities. It suffered a setback a decade ago when a section of U.S. 93 was built that bypassed the city and took away Las Vegas-bound travelers who would normally stop and enjoy the town’s western vibe.

The community remains a tourist destination and its leaders have focused on revitalizing the downtown area.

“Wickenburg is very blessed to have the Peralta family participate, because this wasn’t just David Peralta, this was also his wife who wanted this to happen as well,” Lorefice said. “We’re kind of that great wholesome, rural community, and we have somebody that we’ve been matched with from the Diamondbacks who is clearly just a very wholesome and genuine guy.”

Peralta’s authenticity and heritage resonates with Wickenburg given the area’s large Hispanic population. Lorefice also praised the Diamondbacks organization for the partnership.

While CDC guidelines prevent Little League games from being played at David Peralta Park until next year, the facilities are very much open for business with the safety enhancements in place. Once Wickenburg’s Little League resumes, baseball players will be greeted with fresh uniforms and a state of the art complex.

The Peralta family will have to wait for the town’s planned dedication ceremony in the coming months, but the outfielder’s status and legacy as an Arizona sports icon will be cemented with this honor.