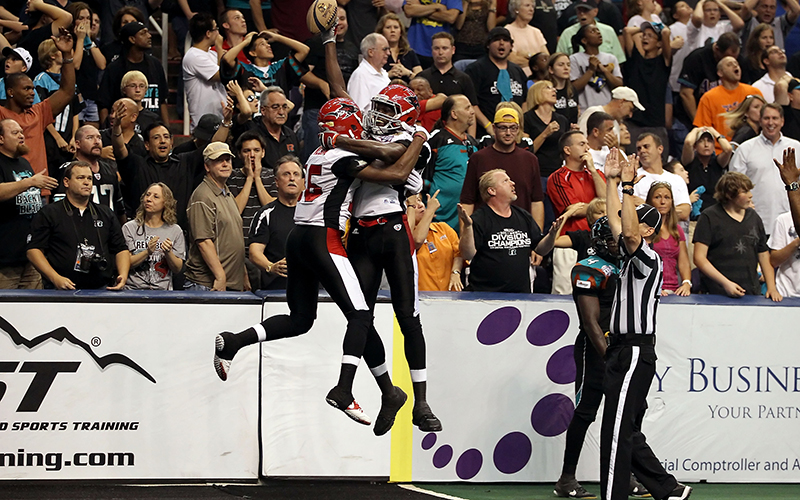 Indoor football, like this game at Talking Stick Resort Arena in 2011, allows fans to experience competition up close. That’s what followers of the new Indoor Football League team in Prescott Valley will experience. (Photo by Christian Petersen/Getty Images) 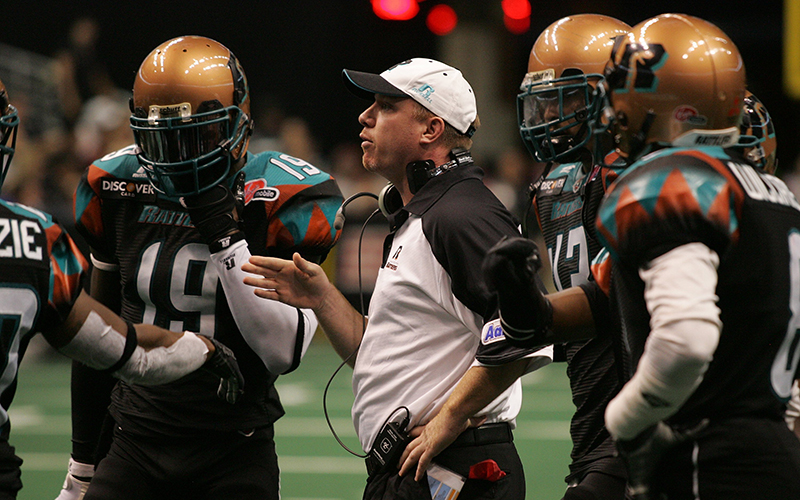 Arizona Rattlers coach Kevin Guy will have the more Indoor Football League competition in the state in 2021. Prescott Valley will be the home to a new team in the spring. (Photo by Gene Lower/Getty Images)

PHOENIX – Prescott area residents have something to cheer for, again.

“This has been a challenging year,” said Shane Cadwell, general manager of Findlay Toyota Center. “Given the difficulties that we’ve had over the last four or five months, this is a really good day for us. We’re really excited.”

The community recently lost the G League Northern Arizona Suns, who will relocate to Phoenix for a season before joining the Detroit Pistons organization.

The latest addition to Arizona’s list of professional indoor football franchises doesn’t have a name, or logo or color scheme, yet. But, it does have an ownership group led by Texas native Trey Medlock that is determined to support the community and give football players another opportunity to showcase their skills in hope of reaching the highest level.

“I like to call it the working man’s game,” Medlock said, responding to a fan theorizing that arena football players display their passion more frequently than some NFL players. “These guys are busting their tail for very little.”

Now, Prescott area fans have the chance to help set the tone for the franchise by assisting in the creation of the team’s nickname and uniform design.

Medlock said he wants the people to offer up their ideas. A community poll could be on the horizon after narrowing down potential choices.

“I may be the face of the franchise,” Medlock said, “but we will do everything we can to make sure that (this) is your team. The city, the county, the community — it’s your team.”

The 2020 IFL season was canceled in April after just two weeks of play due to the spread of COVID-19. The 2021 campaign will begin in March, so Medlock has plenty of time – six months to be exact – to get situated in a new home, hire a coaching staff with indoor experience and sign a roster full of free agents.

“We have a lot to work for, and we have a lot to grow on and prove to ourselves,” Medlock said, “(so) that we can compete with the Arizona Rattlers and (Tucson) Sugar Skulls.”

For perspective, the Rattlers are five-time ArenaBowl champions, and also won the 2017 United Bowl in their rookie season in the IFL. And, the Tucson franchise has familiar leadership. The Sugar Skulls, who are led by co-owners Kevin and Cathy Guy, qualified for the 2019 IFL playoffs – their first season in the league. Kevin Guy pulls double duty as he also has been the Rattlers’ head coach since 2008.

“I now have three reasons to come to the state of Arizona when it gets a little cooler out,” IFL Commissioner Todd Tryon said.

Tryon thanked Medlock for picking a warm state, after combing the map the past 12 months, seeking a home for the league’s 16th active franchise.

The commissioner said the fit felt right on all fronts because Prescott Valley checked all the boxes. Through conversation, Tryon discovered he grew up 15 minutes from Cadwell in Lake View, Iowa, which spurred a strong relationship with the venue. And, Medlock earned his stripes in ownership roles of various sports teams across several states over the years, thus earning Tryon’s trust.

Geographical location was a third major selling point. The Rattlers’ sustained success, and the Sugar Skulls’ immediate rise to contention is a testament to the state’s wealth of prospective football players, and surging arena football fan bases.

“I tell people, when I hear people make the comment ‘trying to keep up with the Joneses,'” Kevin Guy said, “(that) we are the Joneses.”

Medlock leaned on Guy for advice throughout the IFL expansion process, but admittedly, Medlock said both husband and wife are now the new franchise’s biggest nemeses. His team must swiftly prove it belongs in a state, which Guy said is already viewed as the IFL’s flagship market.

“We’ve been in business almost 30 years,” said Guy, noting the organization’s success has been indifferent to the platform they’ve operated on. “I’ve always felt like the Rattlers have set the standard.”

This isn’t the Arizona Adrenaline team that took the Prescott area by storm in 2008, albeit in another league. It’s not the Adrenaline squad that returned to the field as first-year members of the IFL, following a two-year hiatus, in 2011 – only, to fold a year later. It’s entirely new, and possesses the wherewithal to challenge the state’s status quo.

“Whoever started off the year saying that nothing good is coming from 2020, obviously, has not come to Prescott Valley because we are doing amazing things, and we have Shane Cadwell and his team to thank for that,” Mayor Kell Palguta said.

The Prescott Valley “Football Team,” may be without a nickname, for the time being, but the group’s vision isn’t lacking.

“We want to give back,” said Medlock, highlighting his desire to build something special through advertising and marketing opportunities, while impacting lives in the community. “And, we feel like that’s extremely important in today’s environment.”

Medlock said he’ll achieve his mission by working hand-in-hand with local businesses, and said he aims to build a diverse fan base by offering affordable ticket prices, ranging from $17 to $47.

He is already anticipating a frenetic crowd of 5,000-plus when his team hosts the Rattlers and Sugar Skulls at Findlay Toyota Center next spring. A complete 2021 schedule, featuring eight home and eight road games, is on track to be announced in late September.

“It’s an opportunity to sell our building out and show two other markets that, ‘hey, we can do it here, too’,” Medlock said.

The bottom line? Medlock is eager to embark on his latest sports journey, and is determined to give Prescott area residents a professional indoor football team that they can root for, again.

“After I looked at the business model and the opportunities that the league was presenting,” Medlock said, “it made all the sense in the world.”