Toptracer, the popular ball-tracking technology that traces the shots of the game’s pros, is now available as a learning tool for everyday golfers at places including Topgolf in Scottsdale. (Photo by Michael Baxter via Topgolf) 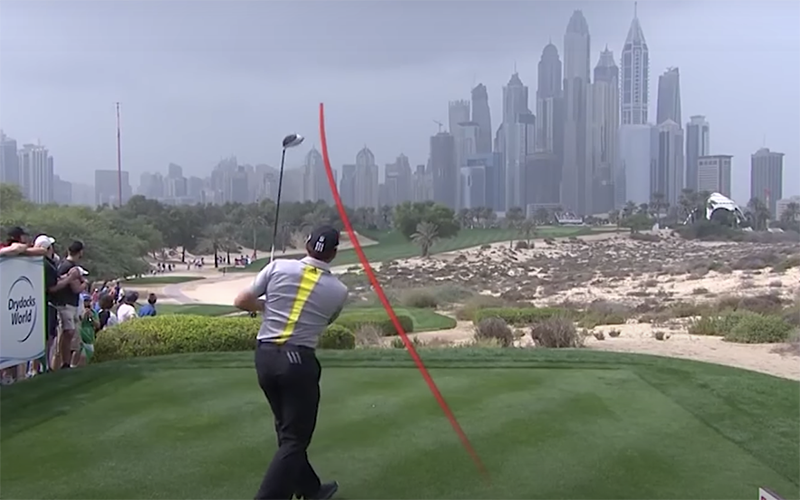 Tracking equipment like Toptracer have made the TV viewing experience more enjoyable for fans of professional golf. (Photo courtesy Toptracer)

PHOENIX – When Rickie Fowler knocked his tee shot just 9 feet short of the pin in the third round of the 2020 Waste Management Phoenix Open, the rowdy fans at 16 roared their approval. So did viewers at home, who had a better understanding of the shot’s trajectory than even those in the stands.

That’s because of Toptracer, the ball-tracking technology that allows television viewers to track ball flight in real time.

“Similar to the first-and-10 line in American football, it added a new level of insight and understanding around what was being displayed on-screen,” Amanda Lam, the senior brand manager at Toptracer, said about the arcing line the viewer sees.

Toptracer has made itself available to the amateur golfer, too, with its presence at driving ranges. It tracks the flight of a golf shot and displays it on a nearby HD screen. In Arizona, several ranges offer it, including Valley Golf Center in Avondale, Western Skies Golf Club in Gilbert and Longbow Golf Club in Mesa. Additionally, Topgolf has it at select venues, including the one in Scottsdale.

Toptracer is the brainchild of Swedish entrepreneur Daniel Forsgren, who, while watching golf, longed for the ability to better track ball flight with graphics and a display of the shot shape and trajectory.

The science behind it starts with cameras and sensors that build three-dimensional space. In that space created, any golf ball entering will be tracked.

At driving ranges, “the light waves created by the golf ball allows the software to track the ball flight and show it up on the screen,” Lam said. “The software can track multiple balls at once and assign it to the correct bay because of the distance apart that the sensors are.

“It breaks the range down into triangles (like an invisible grid) so the ball can be traced back to each bay knowing the angle at which the ball enters and exits each triangle.”

The 16th hole at the Waste Management Phoenix Open is the perfect place to use Toptracer ball tracking technology because TV viewers get an understanding of what fans in the stands see close up. (Cronkite News file photo)

The world has not lost its love for the sport. Golf retail sales reached $13.4 billion worldwide in 2018, according to the 2019 World Golf Report.

Toptracer first captured the public’s attention after its appearance on televised golf tournaments. After its introduction in 2006, it made its broadcast debut in the 2008 Masters.

John DelVecchio, NBC Sports and Golf Channel Director, was introduced to Toptracer in 2006. He immediately wondered how the new technology would work and how much it could enhance a broadcast. Simply, it paid dividends.
“A colleague of mine was very instrumental in getting it and he was the one who said, ‘The British Open, the Open Championship is a perfect venue for this because when you see the background, it’s nondescript, there’s not as much background,'” DelVecchio said.

As years passed, DelVecchio used it more and more and it challenged his production crew. Since a two-thirds of a second, 20-frame delay exists, DelVecchio has to match changes on the fly during a live broadcast.

“You have to make sure everybody is aware that everything syncs up because they delay the audio to match the video,” he said.

While Toptracer changed the production of golf behind the scenes, it affected on-course reporters as well. Dottie Pepper, a CBS reporter and 17-time winner on the LPGA Tour, welcomed its addition.

“I think it gave you something automatically to talk about on one particular shot,” Pepper said.

It allows for deeper analysis, showing club and ball speed, spin rates, height and even hang time. It also takes pressure off the broadcasters because the technology fills dead air.

“I think you should just let the shot talk about it because you really shouldn’t be talking when there’s contact made anyway,” Pepper said. “You can say that the shot started to the right and then let the technology tell the rest of the story.”

In the 2020 Phoenix Open, CBS used Toptracer throughout the production of the event. It was particularly effective on hole 16, which is widely considered the loudest on the PGA Tour. It allowed the viewers a deeper understanding of the players’ tee shots and helped explain the crowd reactions they heard.

As challenging as it can be to secure an in-person spot among fans at 16, for many, it has proven to be a welcome alternative.