The Phoenix Unified High School District this week decided to end its contract with the city for school resource officers, a position that has come under increased scrutiny in recent weeks. (Photo by Faith Miller/Cronkite News)

PHOENIX – Advocates called Phoenix Union High School District’s decision to do away with school resource officers a good first step toward ending police presence on school campuses, but only a first step.

The school district announced Tuesday that it will not renew its annual agreement with the city of Phoenix for school resource officers, or police officers who are hired to patrol elementary, middle and high school campuses.

School resource officers have come under increased scrutiny in the wake of nationwide protests over the killing of George Floyd at police hands in Minneapolis, which has sparked a national dialog on institutional racism, particularly in police forces.

In announcing the decision in a video Tuesday, Superintendent Chad Gestson said now is the perfect time for action and that “more listening and more focus groups will not solve the issue or bridge the divide.”

The decision will free up $1.2 million, which the school district said will be allocated after what it called a “participatory budgeting initiative,” with $500,000 to be budgeted through a staff-led process, $500,000 for student-led process and $200,000 for parent-led process.

Gestson said the district will continue to use off-duty officers on campus.

Kevin Quinn, the president of the Arizona School Resource Officers Association, would not criticize the decision, saying he has not been able to talk with district officials on their reasoning, but he defended the good work that officers can do. Losing those officers could be a “big blow to the schools and the community,” he said. 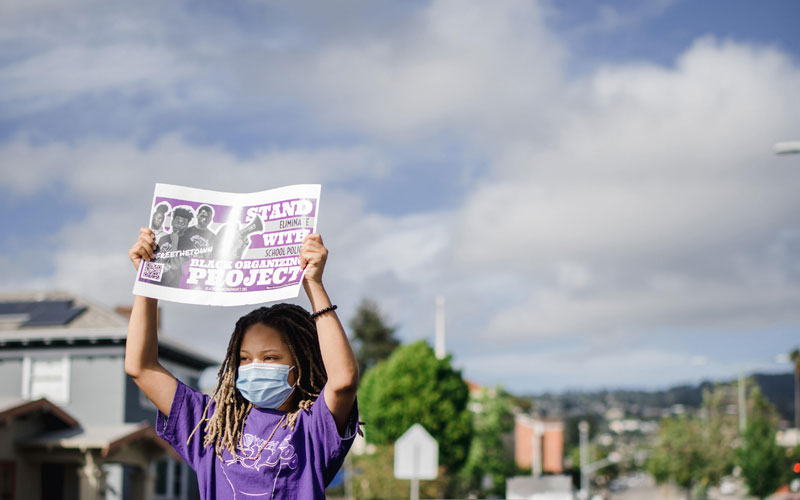 But advocates who have long pushed for the removal of resource officers from schools welcomed the decision, which they said “came as a surprise.”.

Abia Khan, a recent graduate of North High School in central Phoenix, started a petition last mouth calling for Phoenix Union to terminate its contract for school resource officers. Khan worked with Phoenix advocacy organizations Puente Youth and Poder Youth – who have long been involved in the issue – to achieve what she called “an amazing first step … but there’s still a long way to go.”

The district, which comprises 20 Phoenix high schools, has more than 27,000 students, nearly 82% of whom are Hispanic, according to its website.

“In Phoenix Union, a lot of students are undocumented or students of color, and having that police presence just makes them feel unsafe,” Khan said.

But Quinn said that he often got a different reaction from students during his 15 years as a school resource officer.

“I’ve had students who reached out to me and just basically said, ‘Hey, I wasn’t the best kid but I’ve turned my life around and wanted to thank you for what you did,'” Quinn said. “That makes it all worthwhile.”

In Gestson’s video statement, he said he anticipates there will be little-to-no need for on-campus police this fall, as Phoenix Union announced that it will begin school Aug. 3 “with full remote learning” and could continue online for weeks, if not months. More details on the decision are expected to come during a special Phoenix Union school board meeting set for July 17.

Khan said she and other advocates worry that the school district can still reinstate the officers next year.

“We’re concerned that their intentions might not be in the right place,” Khan said. “We want to make sure they make it clear that this is a long-term commitment, this is now and forever.”

Quinn said he understands how unique situations call for unique changes, but he hopes the change is not irreversible.

“I’m hoping, obviously, that everything on the campuses stays calm and that there are no issues, but kids are kids,” he said. “Once they realize there’s less security on campus, I’m hoping they don’t start to push the envelope. My biggest fear is that there’s serious criminal activity, but I’m hoping that doesn’t happen.”

But Khan said she is hoping it is the start of lasting change.

“This is huge,” she said. “I think it will help other schools take that leap of faith with Phoenix Union and hopefully move forward toward a more progressive way of schooling and way of security on campuses in making our schools safer.”