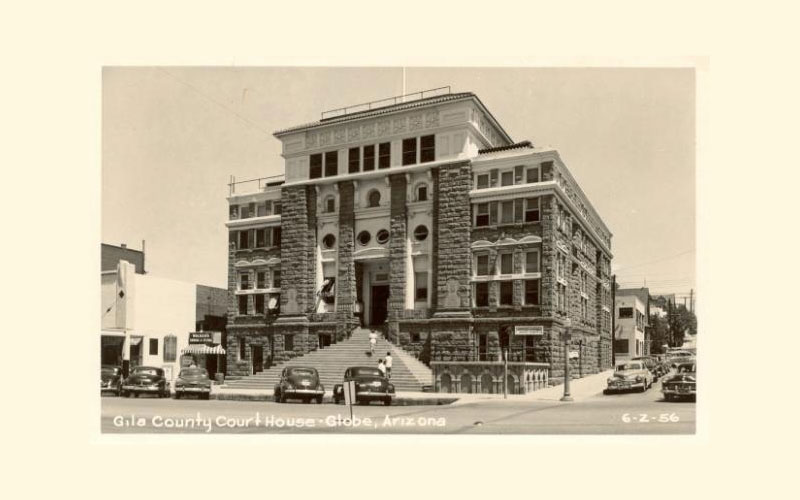 Gerald “Jerry” Gault was 15 when he was accused of making an obscene telephone call to a neighbor in June 1964. Judge Peter J. Cahill of Gila County Superior Court presided over the case in Globe, whose courthouse is pictured here, circa 1956. (Photo courtesy of courthousehistory.com)

PHOENIX – One June day in 1964, Gerald Gault and a teenage friend made a bad decision. They made an obscene phone call to Ora Cook, Gault’s neighbor. She called the police, and both boys were arrested and taken to a juvenile detention facility in Gila County.

The case went all the way to the U.S. Supreme Court, whose ruling established the right of minors to be represented by attorneys. But today, 53 years later, legal representation remains uneven, children’s advocates say.

The juvenile justice system was bewildering to Gault, who was 15 when he was taken into custody, and his family, according to Supreme Court testimony. Police made no attempt to notify Gault’s parents of his arrest – they only found out months later. As Gault’s case made its way through the court, the judge questioned Gault, never with a lawyer present and sometimes without even his parents, and no transcript or recordings were made. The judge sentenced Gault, who was on probation at the time of his arrest, to six years in juvenile detention. Gault’s parents challenged the sentence.

Had Gault been 18, he would have been provided legal counsel automatically, a right afforded by the 14th Amendment to all adults who are arrested. But Gault was a minor, and the criminal justice system treats minors differently from adults.

In re Gault – as the court’s 1967 ruling is known – for the first time officially recognized that children have the same legal rights as adults. But 53 years later, legal experts say the goal of Gault’s case has not been met: Children across the states still aren’t automatically provided their right to legal counsel.

A 2017 report from the National Juvenile Defender Center, on the ruling’s 50th anniversary, found that no state guarantees minors access to a lawyer. Minors who do get lawyers often don’t get them until after they’ve been interrogated by police, and they must pay for their own “free” counsel, the report said. Minors also are encouraged to waive their right to a lawyer and are denied access to a lawyer after sentencing, according to the report.

“Even in the cases in which kids are represented, there’s wide disparity with regard to the quality and the resources awarded their representation,” said Laura Cohen, director of the Criminal and Youth Justice Clinic at Rutgers University.

Chicago is credited with creating the first juvenile justice system, in 1899, according to the National Academies Press.

David Tanenhaus, a professor of history and law at University of Nevada, Las Vegas, said the juvenile system was not designed to have the same formality and procedures as the adult criminal system. Experts recognized that adults and children are fundamentally different – adults require punishment for their crimes, while children and adolescents require rehabilitation – and so distinct legal systems were established.

“The logic of the original juvenile court is that you should think about what a child needs – so it was more based on needs than thinking about constitutional rights to due process,” Tanenhaus said.

As a result, juvenile defenders say, the system was ill-equipped to provide legal counsel to kids who needed it. The rules that had been established to protect kids from the formality and procedures of the adult system failed Gerald Gault: He was a teenager suddenly facing an adult’s punishment, with no recourse to defend himself.

Despite In re Gault, children still systematically are denied their 14th Amendment rights, advocates say.

There are numerous roadblocks to change, Cohen said. Some are philosophical, such as the longstanding belief that justice system involvement can be beneficial for troubled children. Others are financial – many public defender offices are grossly underfunded, with some juvenile defenders working enormous caseloads on impossible schedules.

Although In re Gault did require that youth have access to counsel, it did not require that states establish public defender offices equipped to do so. Because of this, some children – particularly those living in rural areas – are forced to rely on private defense attorneys, according to the National Juvenile Defender Center’s 2017 report.

Overworked public defenders have inadequate time, training or resources to properly handle juvenile cases, which can be much more complicated than cases involving adults.

“It takes a lot longer to represent a child,” said Tim Curry, the legal director at the juvenile defender center. “I can’t expect to have one meeting with (a child), go through all these complicated legal situations and expect that to be it.”

Since that 2017 report by the National Juvenile Defender Center, some court jurisdictions have improved their public defender offices’ counsel to juveniles. But the standard Gault was supposed to establish remains far from reality, Cohen said.

“There’s a lot of work that remains to be done,” she said.