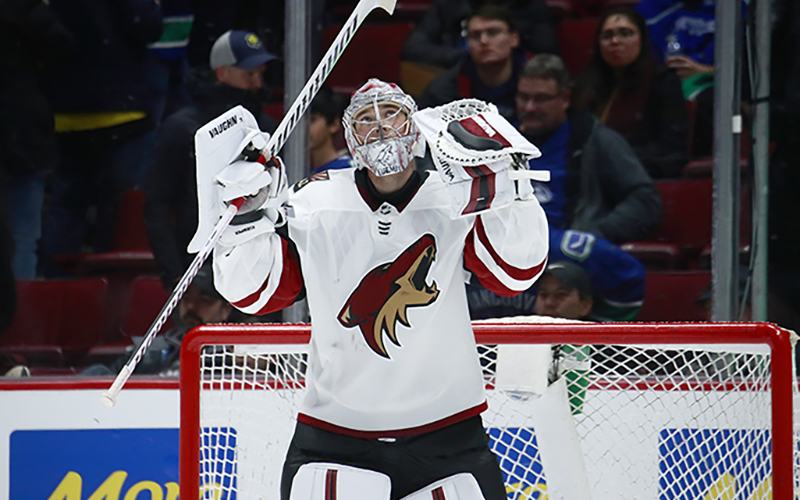 Coyotes goalie Darcy Kuemper is thankful and excited that the NHL postseason will resume on Aug. 1. Training camp starts in less than three weeks and Kuemper said he has tried to stay mentally sharp while waiting for the season to resume. (Photo by Jeff Vinnick/NHLI via Getty Images)

PHOENIX – Playoff hockey is arguably the most electric postseason in all of sports, a grueling four rounds and best-of-seven series that culminate with lifting the Stanley Cup. This NHL postseason, however, is going to be different for players who have been off the ice for two months.

The NHL regular season was cut short on March 12th due to COVID-19, but on May 26th commissioner Gary Bettman shared a 24-team playoff proposal that paved the way for training camp to start July 13th.

The Arizona Coyotes landed in the 24-team playoff based on their points percentages at the time the season was suspended. They are one of 16 teams participating in a best-of-five play-in series and will face off against the Nashville Predators. The NHL postseason is scheduled to start Aug. 1. Several news outlets have reporters Edmonton and Toronto will be the hub cities for the playoffs. Several U.S. cities, including Las Vegas, were considered to host but a spike of COVD-19 cases in the country prompted the league to put its postseason in the north.

Despite the 11th-seeded Coyotes splitting their last 10 games, coach Rick Tocchet says his energy is focused on the playoffs and not the chosen format.

“Playing Nashville, great organization, great team, so it’s gonna be a great matchup,” he said. “That’s all my focus is on. The opinions of what’s fair and not … doesn’t really matter at this point. I just look at our team and worry about our hockey club, to be honest.”

The Predators are a No. 6 seed for the postseason tournament. In their last 10 games, they went 6-3 with a three-game winning streak before the season was suspended. They split the series with the Coyotes in October and December. 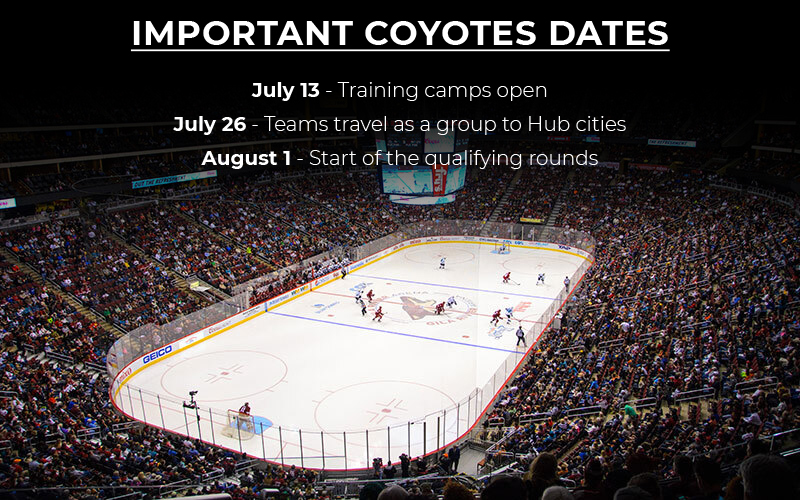 Important dates for the Coyotes and other NHL teams.

Coyotes center Derek Stepan is thankful for the second chance and being able to compete in playoff hockey. He is also excited for the eight players on the Coyotes roster that are under 25.

“I’m looking forward to having some of our younger guys get in a head to head,” he said. “You match up against the same guy every single night.”

Yet, with being off the ice for two months, players are trying to ramp up their physical health and mental game. Starting goaltender Darcy Kuemper believes quarantine is a time when players need to stay focused.

“As much as it looks like it’s a long time away, it’s going to go by fast and skates are going to be limited,” he said. “So it’s just taking advantage of every day you’re on the ice and really buying into the situation.”

Kuemper was a key figure for the Coyotes, who finished 33-29-8 with 74 points. He ranked third in goals against average with a 2.33 and a save percentage of .928. Even while giving his body a break, Kuemper found ways to stay mentally sharp.

“Yeah, even a couple times where, you know, I’ve turned on that NHL Network or whatever, just watch an old game,” he said. “It doesn’t matter who is playing, just watch the game and keep your mind kind of into it as best you can.”

Kuemper has remained in Arizona despite the rise of COVID-19 cases. Other players, including right winger and two-time Stanley cup winner Phil Kessel, went to his home in Florida for a few weeks. He then came back to the Valley when the Coyotes announced players were able to return to Gila River on June 7th and said he felt ready to go. But the biggest challenge Kessel sees in this playoff format is you need to be full speed as soon as your blades touch the ice.

“I don’t know how many exhibition or preseason games we’re going to have,” Kessel said. “But like I said earlier, I think the team that gets into it the fastest, can get into that shape and play well, I think they got a big advantage.”

Kessel has veteran playoff experience that he can share with the young core. While winning the Stanley Cup with the Penguins, Kessel notched 22 and 23 points in the postseason. This year’s playoffs are a little different because of COVID-19 but it does not change the team’s drive.

“I think you know, without fans and everything, it’s gonna be strange. But, I think guys know what they’re playing for and we all want the chance to win,” Kessel said.