These tried and true recruiting maxims have informed the recruiting strategies of nearly every Division I football program. Yet in Arizona in the class of 2021, high school prospects are committing to programs everywhere but in state.

Top prospects Ty Thompson and Bram Walden are headed to Oregon. Saguaro’s Denzel Burke and Quintin Somerville plan to suit up on opposite sides of the Michigan-Ohio State rivalry.

Of the top 25 class of 2021 Arizona prospects listed on 247Sports, not one has committed to an in-state school. Ten are uncommitted, and only one, safety Krew Jackson of Queen Creek, is projected to commit to ASU.

Desert Edge cornerback Steven Ortiz Jr., who committed to Minnesota, thinks it has something to do with the ASU staff’s emphasis on recruiting prospects from the state of California.

“Yeah, because once a new coaching staff comes in and just says like, ‘All we want is Cali kids?'” Ortiz Jr. said. “It’s like, all the home kids are like nothing to them. So I mean, it motivates the home kids, they just go somewhere else besides ASU.”

ASU has not been shy about sharing its affection for talent in its neighboring state.

“Our home base is Southern California. No hidden agenda about it,” ASU recruiting coordinator Antonio Pierce said in December. “It’s where the most talent comes from. This program is rocking and rolling. That’s where they come from. The NFL says that. When this program is winning, it says that.”

After some backlash, Pierce clarified his remarks on national signing day in February.

“Home base is Arizona, first base is California and then we move on so forth with the position need and what we need for that class,” he said. “Obviously we hit a home run in California this year, we felt really good about the guys we got out of there, especially the receiving corps that we got out of there.

Head coach Herm Edwards noted that ASU still adds Arizona players to its team each year, though not as many as from California. The largest state by population in the country has a significant talent pool. 247Sports lists 247 California recruits in the class of 2021.

“We talk about California, but this is our base, Arizona, and if you look at the last – and we got here late – the last three classes, we’ve been able to get seven guys out of Arizona,” Edwards said. “I think sometimes that gets overlooked. When you look at the guys that we were after, a lot of other teams were after, there was about 30 players, 29 players we coveted with a lot of other teams.”

He insisted ASU would continue recruiting its state with vigor.

The Arizona State staff has been transparent about its emphasis on California recruits on social media as well, with the hashtag #CaliDevils gracing a number of posts.

In ASU’s 2020 recruiting class, which finished 23rd in the country according to 247Sports, the five highest-rated prospects were from California. So was the bulk of the class as a whole, with 13 prospects hailing from California and just two from Arizona, Florida and Missouri. One each joined from Georgia and Ohio as well.

ASU did have interest in players from Arizona, Edwards said, and his staff extended offers to 20 of the state’s top 25 in the 2020 class.

Pierce coached powerhouse Long Beach Polytechnic High School before joining ASU as linebackers coach under Edwards in 2018. Pierce and Edwards have overseen staff additions that further solidified their recruiting ties in the region, such as new wide receivers coach Prentice Gill, who played for Cathedral High in Los Angeles and recruited Southern California as an analyst for Oregon before joining the Sun Devils. Gill’s hire is considered instrumental in wide receiver Johnny Wilson, the Sun Devils’ highest-rated commitment in the 2020 class, flipping to ASU from Oregon.

Arizona’s 2020 recruiting class includes four players from each of California and Texas and just three from Arizona, including quarterback Will Plummer.

Higley quarterback Kai Millner, who committed to California, said he had no issues with how the Arizona schools recruited him. The Berkeley campus simply provided a different experience from what he would get if he stayed within the state.

“I did have both ASU and UofA (offers),” he said. “Honestly, it wasn’t really anything against those schools. I just felt that Cal I guess was a better fit for me. But I had great relationships with (offensive coordinator Noel) Mazzone at UofA and (offensive coordinator Zak) Hill at ASU, so nothing against them, for sure. Just felt like Cal was a little bit better fit.”

Brock Dieu, an offensive line prospect at Casteel High in Queen Creek, committed to Washington State because he wanted a small-town vibe that Tempe and Tucson don’t provide. There was also something else.

“Summer’s here, so I’ve been kind of tired of the heat,” Dieu said. “So I was looking to get somewhere where it was a little bit nicer than, you know, 120 (degrees) at the highest.”

Yet Dieu grew up an ASU fan and received an offer from the Sun Devils. Was the heat really that big of a factor for the offensive lineman?

“I’ve been an ASU fan all my life. My oldest sister actually went there,” he said. “So I’ve known a lot about the school. I think Pullman was just the right place for me to go. It just had everything I wanted. I wanted to be able to get out and get into that small town college feel.”

And if anyone doubts Ortiz Jr.’s commitment to Minnesota, his actions show otherwise. He’s actively recruited other players to join him at the emerging Big Ten power, like fellow four-star cornerback Avante Dickerson from Omaha Westside in Nebraska.

“Yeah, as soon as I saw he had the Minnesota offer and I committed before him, I said, I could play with this guy on my side,” Ortiz Jr. said. “I want to play with him. So I started trying my best to get him to come to Minnesota. And we’re trying to have the best lockdown side on defense.” 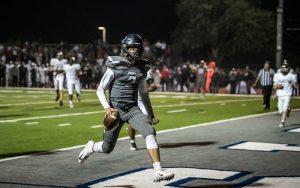 Higley High School quarterback Kai Millner said he had no issue with how the Arizona schools recruited him but just liked the atmosphere at California. (Photo courtesy Kai Millner)

Ortiz Jr. won’t share who else he’s recruiting, but he’s committed to helping Minnesota secure its best recruiting class in history. He helped organize a trip to South Florida for Minnesota’s class of 2021 commits, including Dickerson, to meet each other.

All this from a player who grew up in the Valley. Ortiz Jr. said he felt disrespected by ASU, which he says never showed interest in him.

“My mom was like a diehard ASU fan, my whole family was,” Ortiz Jr. said. “So I grew up a little bit like an ASU fan. So if they offered, it’d be awesome because my mom went there, and I also would have committed there probably. But they didn’t offer, and I saw no love, so I was like, I’mma just keep grinding it out.”

“I don’t think they’re as involved as they should be,” Ortiz Jr. said. “Because I think every kid that ASU hasn’t offered, every other school is going for them. And they’re winning them.”

He did have an offer from Arizona and attended the school’s junior day for recruits. His decision to spurn Tucson for Minneapolis had more to do with his comfort level with the defensive backs coach at each school and the family-oriented atmosphere at Minnesota.

“UofA was in my Top 10 because I wanted to stay home at the same time too,” Ortiz Jr. said. “But I didn’t really feel comfortable when the DB coach came, as comfortable as I was with Minnesota. So then I just picked Minnesota over them.”

As Top 100 national prospects like Thompson and Walden leave the state to attend a school that ASU beat in dramatic fashion in 2019, the question lingers: Will ASU and Arizona be able to win championships without many of the best players in Arizona on their teams?