The Sonoyta mud turtle is an aquatic species that lives in the Sonoran Desert, a difficult enough existence to begin with. Now, some experts worry that critical habitat for the endangered animal is too close to proposed border wall construction. (Photo by George Andrejko/Arizona Game and Fish Department) 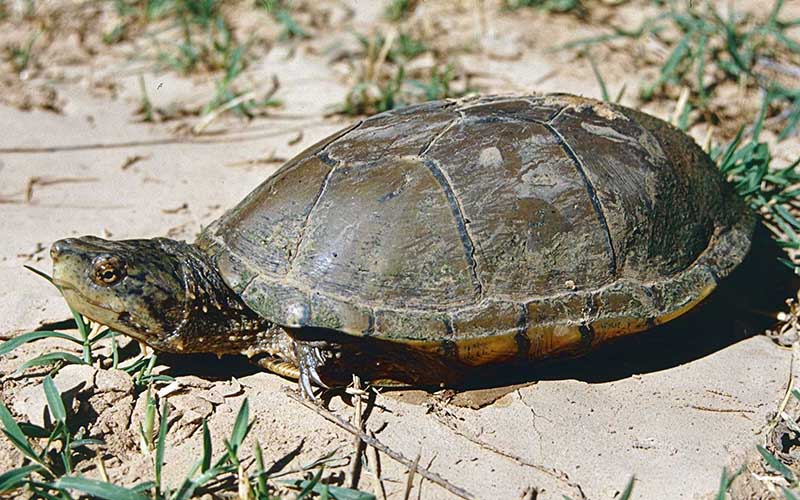 An adult Sonoya mud turtle, of which only about 150 are believed to be left in the U.S. The endangered turtle is found only in Arizona’s Quitobaquito Springs, near the border in the Organ Pipe Cactus National Monument, and in scattered pockets in northern Sonora, Mexico. (Photo courtesy U.S. Fish and Wildlife Service)

PHOENIX – Nearly three years after it won endangered species status, the Sonoyta mud turtle was granted 12.3 acres of protected habitat this week – but supporters worry that that habitat may no longer provide all the protection the turtles need.

The U.S. Fish and Wildlife Service on Tuesday designated an area in the Organ Pipe Cactus National Monument, in the turtle’s historic territory in the Rio Sonoyta watershed, as protected.

But that habitat bumps right against the U.S.-Mexico border, where one expert said construction crews “are pulling huge amounts of water out of the aquifer” to work on the border wall.

Critics worry that the pumping will eventually affect the Quitobaquito springs and pond, which the turtles have depended on for what experts think could be thousands of years. The pond sits around 100 yards from the site of the planned border wall.

“They are pulling huge amounts of water out of the aquifer to mix concrete and to spray on the roads to keep dust down, and it’s only a matter of time before the flow that reaches the surface of the spring there fails,” said Randy Serraglio, southwest conservation advocate for the Center for Biological Diversity.

“When that happens, then that’s it. The aquatic habitat dries up and the turtle will die,” Serraglio said.

The border wall is just one issue the turtle faces in the middle of the desert, where Serraglio said over-pumping, water diversion and 20 years of drought conditions also pose threats. 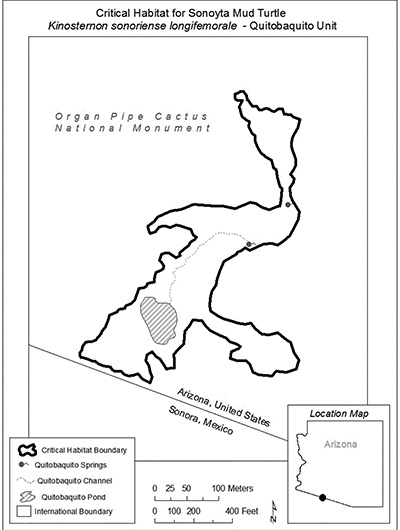 The 12.3-acre critical habitat for the endangered Sonoyta mud turtle is in the turtle’s historic territory, but that land now butts up against the U.S.-Mexico border and a pond the turtles use is just 100 yards from where the wall will go up. (Map courtesy U.S. Fish and Wildlife Service)

There are only about 150 Sonoyta mud turtles believed to remain in Pima County, the only place in the U.S. where the

The designation of critical habitat means that anyone planning work in the area will have to consult with the Fish and Wildlife Service to find a “balance between what human uses and needs are versus what is needed to maintain those systems in perpetuity,” said Scott Richardson, supervisory biologist for the agency.

“It’s important to try to protect all the pieces of things that allow these systems to stay intact and function,” Richardson said.

But Serraglio notes that the Trump administration has invoked “section 102” waivers, part of a 2005 law that allows the Department of Homeland Security to waive environmental and other regulations to speed construction on the border.

That waiver was noted in Fish and Wildlife’s final rule on the critical habitat designation, which said DHS has the authority to waive all legal requirements “to ensure the expeditious construction of barriers and roads.” The final rule also noted that DHS and the Pentagon – which is also building portions of the wall – were consulted on the critical habitat designation and that neither one asked to be excluded from the designation’s requirements.

Requests for comment from DHS and the Pentagon this week were not immediately returned. But DHS officials have said in the past that the agency “includes analysis of potential environmental impacts from each border infrastructure project” and works to minimize those impacts “to the greatest extend possible,” even when it has waived the regulations.

But Serraglio worries that what is required of DHS and the Pentagon will not be enough to protect the turtle from extinction, which he said is “like playing Jenga with the web of life.”

“You can keep pulling pieces out, and the structure is still standing for now, but you never know when you’re going to pull one of the pieces and the whole thing is going to collapse,” he said.

In the meantime, Richardson said his agency is working with local conservationist groups, the National Park Service and community members to develop a recovery plan that will ensure the turtle’s future.

“I don’t think any potential tool or action we could take to contribute to the conservation of the turtle is off the table,” Richardson said.

Both Richardson and Serraglio said that, without help, the Sonoyta mud turtle still faces a real threat of extinction.

“The turtle is hanging on by a thread,” Serraglio said. “The turtle will persist as long as the habitat is intact, but in a lot of places, permanent damage has been done. Many springs have already dried up and they’re not going to come back.”