Cottonwoods along the San Pedro channel were cut down for pending border wall construction across the river. (Photo courtesy of Jeff Sturges) 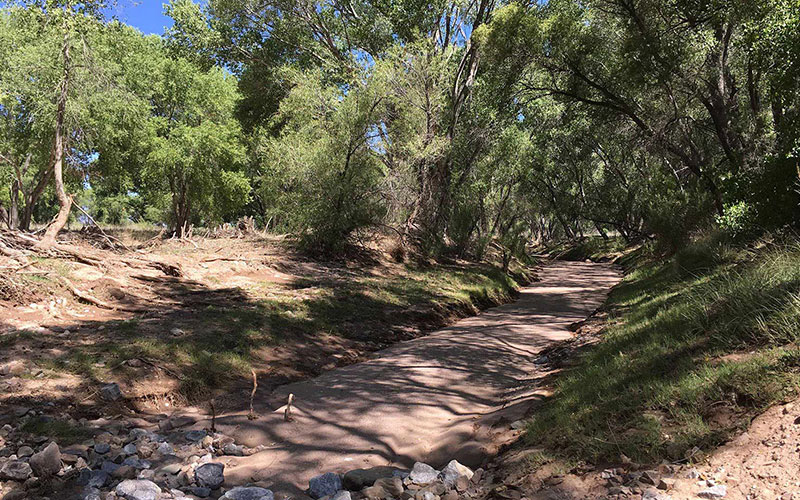 People have gathered to protest pending construction of a border barrier across the San Pedro River, just north of the international border with Mexico. (Photo by Ariana Brocious/Arizona Public Media) 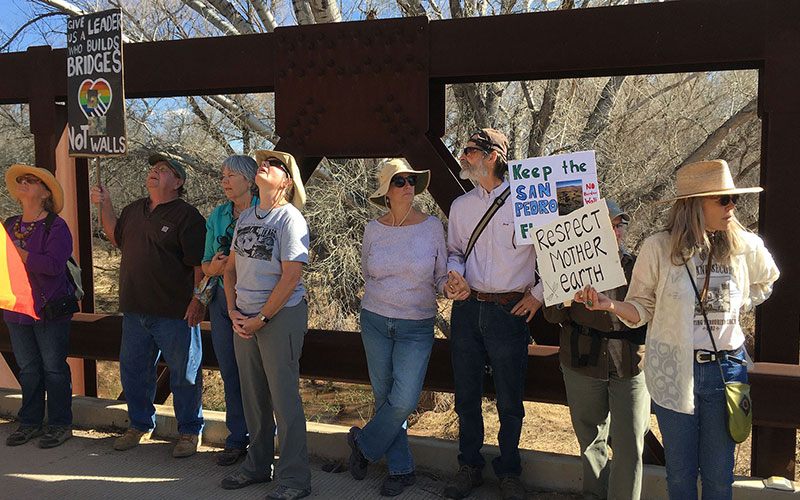 Protesters gather near Hereford in January to oppose the border wall’s construction across the San Pedro River, which flows north from Mexico into Arizona. (Photo by Ariana Brocious/Arizona Public Media)

In January, hundreds of people gathered on a small bridge near Hereford that spans the San Pedro River to protest the pending construction of a border barrier across the riverbed.

Since then, however, the project has moved ahead. Cottonwoods have been cleared and construction crews are setting up, even though U.S. Customs and Border Protection says a final design for the project still hasn’t been approved. Local residents and conservation groups have repeatedly criticized the wall projects. But as the last free-flowing river in Arizona, they say the north-flowing San Pedro is in particular need of protection.

“None of these border walls make sense. That’s what people need to understand first,” said Dan Millis, borderlands campaign manager with the Sierra Club. He and others say the new, 30-foot-high steel bollard walls are ineffective and don’t address the root causes of undocumented immigration or smuggling.

Although Millis and many others repeatedly have pointed to the environmental harm that will result from essentially blocking all wildlife movement across the border, there’s another overarching element of their frustration.

“I did not even know that they were going to be building a border wall until we read about it in the newspaper,” said Cochise County Supervisor Ann English, whose district encompasses much of the county’s borderlands.

She said Customs and Border Protection hasn’t provided any information to the county about the new border wall projects, nor did the agency seek local input.

“This decision was made in Washington, D.C.,” English said. “No one was asked locally, they just did it. They found the money, they hired the contractors and then they appeared on the scene.”

A few months ago, she said, Cochise County’s floodplain manager finally approached the wall contractor on site to inform them about possible damage to the barriers from monsoon floods.

Usually government agencies are required to complete a thorough environmental study for a project of this magnitude, including in a public review process. But the Trump administration has waived dozens of laws to speed border wall construction.

The Department of Homeland Security “is operating fundamentally outside of the law in the United States of America,” said Roger McManus, a retired biologist and board member of Friends of the Sonoran Desert. “Congress gave them the authority to waive laws, but Congress didn’t tell them to go out and waive all laws.”

Customs and Border Protection did solicit public comment a year ago for the first round of wall projects. The agency declined an interview request for this story, but in a statement earlier this month, it said it reviewed and responded to members of the public who commented, and incorporated relevant information into the design process.

McManus said Friends of the Sonoran Desert repeatedly tried to share scientific literature and expertise with the agency on how to mitigate wildlife impacts with border barriers. He also took part in the public comment process.

“But increasingly it’s become clear that this is just a facade by border patrol, and they’re not really interested in this information and just doing it to deflect criticism,” McManus said.

Rancher Kelly Kimbro allowed Customs and Border Protection to use some of her land and groundwater as a construction staging site to keep them from further impacting the adjacent San Bernardino National Wildlife Refuge, where wall is being built.

She said initially there was a lot of communication from the agency, but as the project moved forward, the communication dried up. Like others, Kimbro said her attempts to influence the wall design were useless, and she said the government is moving ahead “without care or concern for the rural communities involved.” She, like others, called the project “a huge waste of money.” 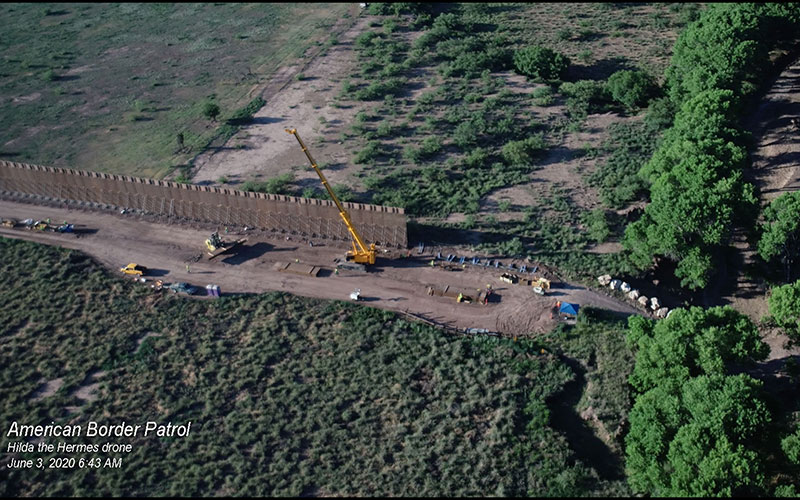 A drone camera captures an image of border wall construction across the San Pedro River in early June. (Photo courtesy of Glenn Spencer)

Ben Lomeli is a borderlands hydrologist who used to work for a federal land agency.

“You can talk about hydrologic damage, ecological damage which comes after, but I think the biggest damage here was the loss of public trust,” he said. “Because they did not work with the communities, they didn’t take input, they kept us in the dark.” He said he’s also bothered by the desecration of Native American graves and sacred sites.

Like others, Lomeli supports border security but said walling off a perennial river like the San Pedro is just not a good idea. It could change the river’s flows, lead to erosion and debris buildup. He pointed to all the tools Customs and Border Protection has at its disposal: “We have horses, we have quads, we have helicopters. We should have a lot of drones with solar stations on the border. So I’m looking at it as a taxpayer and someone that cares about the future of America and I’m thinking that we have much better ways to control that border.”

“We’ve always had some kind of barriers,” English said, “but this one is so in your face. … This one is really offensive looking. It’s almost like when they put the razor wire on the wall,” she said, referencing the Trump administration’s move to add razor wire on the border fence along the Nogales port of entry and others in 2018. “The people here are going, ‘Come on, what are you doing?'”

She added that local law enforcement has been successful in using remote cameras to find and locate people coming across the border illegally or people transporting drugs.

“So that was the frustration, too, is that if something was working, then why are you coming in and spending what will probably be billions of dollars to build this wall?” English asked.

Customs and Border Protection has said the locations identified for new border wall construction are selected based on the agency’s operational needs, and that the Tucson Sector is an area of high illegal activity.

After months with no new details on the project design, the agency in June said the barrier across the San Pedro River will consist of a bridge with gates and is expected to be completed by the end of the year. In an email, Customs and Border Protection said it’s working on an environmental stewardship plan that will be released to the public upon completion and is consulting with environmental firms for surveys and monitoring during construction.

EDITOR’S NOTE: On Tuesday, President Donald Trump is scheduled to visit Yuma to mark the completion of the 200th mile of the border wall project and participate in a discussion with local leaders and community members about border security, according to the Associated Press. The project is not yet half completed, according to Newsweek.