A protester faces Phoenix police in riot gear on May 30, just before officers fire tear gas to disband what they had deemed an “unlawful assembly.” Protests and clashes with police in downtown Phoenix over the death of George Floyd had begun May 28. (File photo by Blake Benard/Special for Cronkite News)

PHOENIX – Sirens blared, lights flashed and helicopters roared overhead as protesters walked the streets of downtown Phoenix the last weekend of May, echoing the demands heard across the country in the wake of George Floyd’s death: “No justice, no peace!”

Then came rubber bullets and tear gas, scattering protesters and bystanders as police enforced their declaration of an unlawful assembly.

The protest continued into the early hours of Sunday, May 31. Later that day, Gov. Doug Ducey responded to damage, looting and clashes with police in Phoenix, Scottsdale and elsewhere by issuing an 8 p.m. to 5 a.m. statewide curfew.

Just after midnight Saturday, before the curfew was issued, Johan Montes Cuevas, 22, and two friends were trying to get home when they saw an arrest unfold at the intersection of Fillmore Street and Central Avenue. Bystander video shows three police officers had stopped a Hummer in the intersection and were approaching the vehicle with weapons drawn, barking orders.

Moments later, officers with drawn guns surrounded Montes Cuevas’ vehicle, ordering him and his friends to exit and lie face down on the asphalt, their hands behind their backs.

“I see what goes on, and it’s kind of surreal being there,” Montes Cuevas said. “I was telling them we weren’t doing anything wrong, and we were just driving and trying to get home. It’s really scary when you have guns drawn on you.” 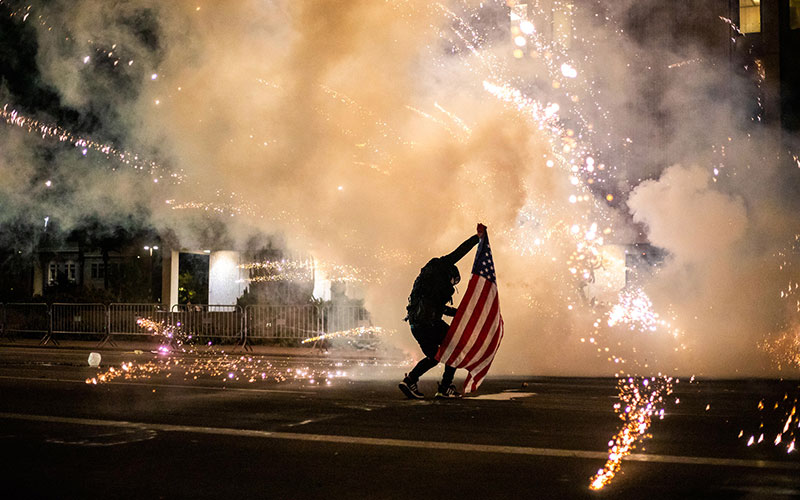 ‘I can't breathe': Protesters take to the streets of Phoenix

In that instant, Montes Cuevas said his dream of becoming a law enforcement officer changed, turned off by policing behaviors that seemed unjust and outsized for the moment.

Phoenix police refuted that characterization of events in a phone interview Thursday.

“I do see an officer with a weapon drawn, but it is not pointed at anyone,” police Sgt. Mercedes Fortune said after viewing the video footage gathered at the scene. “Sometimes videos only provide you with one version of an incident and so, to me, I can’t speak to what the officer knew or what was going on at the time.”

That night’s arrest and possible legal consequences have raised worries about Montes Cuevas’ status as a “Dreamer,” one of more than 675,000 participants in the Obama-era Deferred Action for Childhood Arrivals program, according to December 2019 numbers, the most recent data available from federal immigration officials.

Noncitizens, including DACA recipients, face consequences for being swept up in arrests related to protesting that citizens do not, said Evelyn Cruz, a professor of law at Arizona State University.

“With DACA kids, they have grown up as American as anyone born in the U.S., and they see it as their civil right and as their duty to present the challenges that their communities face,” she said. “They may not even have thought this had an immigrational consequence.”

Even those with legal immigration status face more scrutiny under state law in Arizona, home to what is widely considered one of the strictest immigration measures in the country: SB 1070. Enacted in 2010, it “allows officers who have reasonable suspicion of an individual not being lawfully present to proceed to ascertain their immigration status,” which means Immigration and Customs Enforcement officers can stop and hold in a detention center anyone suspected of violating immigration law, according to ASU professor of law Angela Banks.

Montes Cuevas said he was held by ICE for nearly two days and now faces the risk of deportation, a concern echoed by his lawyer Ray Ybarra.

“Wouldn’t you think I’m basically American?” Montes Cuevas, shaking, told Cronkite News hours after his release June 1. “I was aware of the risks for rioters. The thing is, I didn’t expect to get arrested myself just recording and driving.”

Roberto Cortes, who recorded the scene at the intersection from the backseat of Montes Cuevas’ car, continued to record as officers ordered them onto the pavement. He said an officer threw his phone down while he was recording them.

“No, you’re getting arrested, bud,” an unidentified officer says in the video. “You’re under arrest for unlawful assembly, if you guys want to keep taking part—” before the video cuts off.

Roberto Cortes recorded part of his arrest in downtown Phoenix during protests in the early hours of May 31. He was arrested on counts of rioting and, as a DACA recipient, could face repercussions to his immigration status. (Video courtesy of Roberto Cortes)

The true “American dream” is to “be able to move around without being afraid,” said Cortes, whose legal status also is at risk.

By June 1, the Phoenix Police Department had arrested more than 300 people at the protests against police brutality and violence against Black communities that started May 28, according to Fortune, the police sergeant.

In court documents obtained by Cronkite News, Cortes and Montes Cuevas faced almost identical accusations, with police alleging they were part of a large group of protesters that damaged property that night.

“The crowd was repeatedly ordered to disperse however they refused, taking over multiple streets and continuing to loop throughout the downtown area while also continuing to throw incendiary devices at officers and damage property,” the court documents for Cortes and Montes Cuevas both allege.

Montes Cuevas said the police allegations are false and once they were leaving downtown in their vehicle, the police “just decided to charge everyone with rioting and I don’t know why they decided to detain us specifically. All I did was record.”

According to video footage from that night, Montes Cuevas and Cortes were seated in a car waiting for police detention of the family in the Hummer to end and for police to allow traffic to pass, and were not engaged in any such activity at the time of the arrest.

Following preliminary hearings June 17, Montes Cuevas was found “bailable as a matter of right” while the court found no probable cause for Cortes’ arrest.

Both immigration cases remain “pending before the Executive Office for Immigration Review,” according to ICE Public Affairs Officer Yasmeen Pitts O’Keefe in an emailed statement Thursday. She states Montes Cuevas and Cortes were released from ICE custody. They were then placed under the ICE Alternatives to Detention Program, which monitors them with ankle bracelets instead of keeping them at detention facilities.

While Cortes and Montes Cuevas were arrested and accused by police on counts of felony rioting, charges have not been filed by prosecutors, according to lawyer Ray Ybarra. However, there is still a risk of deportation.

“Police come in with full force because they think they can,” Montes Cuevas said. “That killed me, being detained unlawfully and seeing the abuse the police can do and how much power they have over anyone. They have ‘probable cause,’ and I guess that’s enough for the law, but it’s just wrong how they treat us.”

Police violence not only is happening on the streets, said Viridiana Hernandez, the executive director of Poder in Action, an immigrant organization in Phoenix.

“We are not only hearing the abuses of people who were ripped out of their cars, who were taken without probable cause, but then we are also hearing the injustices and the abuse within the police department and the booking process,” Hernandez said. “Police will not release Muslim women unless they remove their hijab,” and they have placed transgender people in gender-inappropriate holding cells, she added.

As they were being processed in jail, Cortes and Montes Cuevas watched the release of people who had legal immigration status. Then they were moved to a Maricopa County sheriff’s van, where they were held for 10 hours without food, water or any information about where they were going. That’s where Montes Cuevas learned the ages of the children he watched being ordered from the Hummer hours earlier.

In ICE custody, Cortes was kept for another 10 hours and Montes Cuevas was held for almost two days, they said.

“I didn’t even know what I was doing at ICE,” Cortes said. “For everybody else, it said there was no probable evidence for what they were being charged for, and they were able to get out.”

Montes Cuevas, who came to the United States at 6 months of age, said he is now afraid to go to protests, a right protected by the First Amendment.

Although transferring to an ICE detention center is the most common process when someone without legal status is arrested, there are other options, according to Banks, the ASU professor of law.

These alternatives include the use of smartphone check-ins that have voice recognition and ankle monitors, which Montes Cuevas and Cortes were issued, to allow ICE to track any violations of their terms of release.

“I have set restrictions with this ankle monitor,” Montes Cuevas said. “I can’t be 75 miles outside of Phoenix, and if I don’t comply with the requirements, there is a higher chance of my deportation, and that thought is always in the back of my mind.”

ICE released him June 1 after his fiance and Poder in Action encouraged the public to call ICE field director Jesse Williams to demand the release of Montes Cuevas and others arrested by Phoenix police and turned over to federal authorities.

“People are protesting police violence, and that’s exactly what they’re experiencing when they’re being arrested,” Hernandez of Poder in Action said. “This is a very traumatic process and for people who are already in pain and already scared.”

This isn’t the first time Montes Cuevas and his fiance have seen friends and family members detained by ICE for little to no reason, he said.

“It does hurt to see someone get taken away like that and my fiance has had people taken like that for no reason at all, just because we are immigrants,” he said. “We are law abiding. We’re not hurting, we’re not murdering, we’re not committing crimes or anything.”

He said as much as he wants to fight for his rights, “it’s hard to do when you’re undocumented, and that’s true for everyone under police supervision at the moment. Not everyone is treated right and it just comes down to being human beings.”