Crews at the Bighorn Fire build fire lines to defend homes and businesses in the community of Summerhaven on Mount Lemmon. (Photo courtesy of Inciweb) 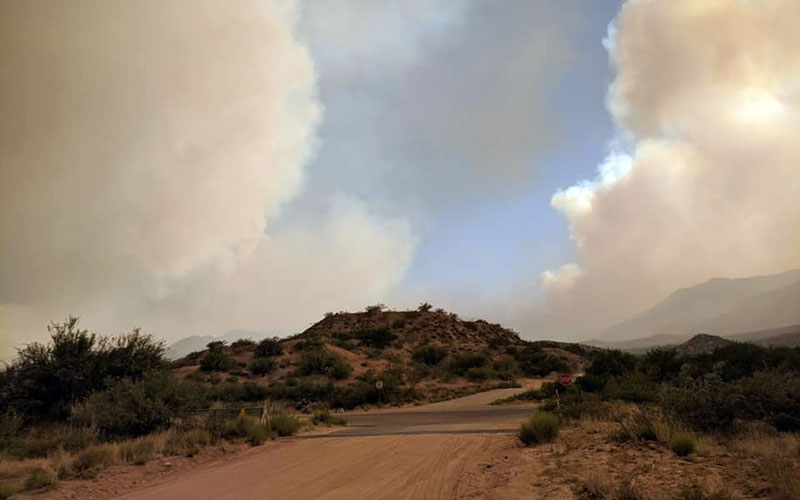 The Bush Fire northeast of Mesa had grown to 89,059 acres and was 5% contained as of Wednesday. (Photo courtesy of Arizona Department of Forestry and Fire Management) 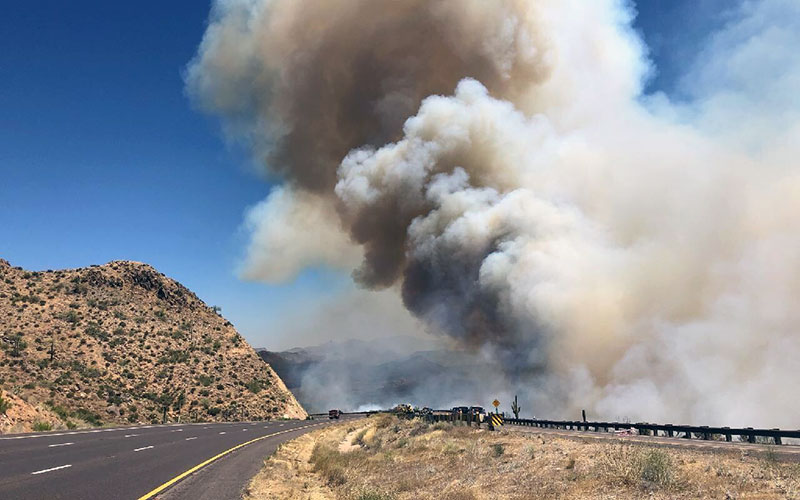 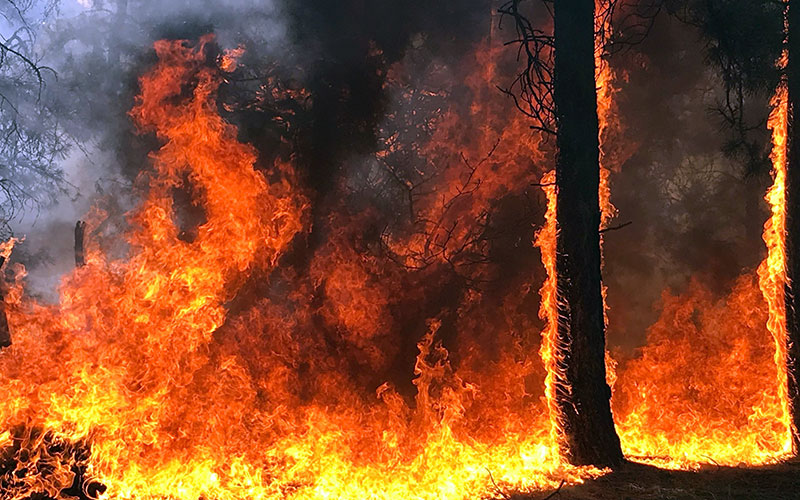 The Mangum Fire is burning in the Kaibab National Forest near the Grand Canyon. The fire has blackened more than 47,000 acres since it started June 8. (Photo courtesy of Inciweb) 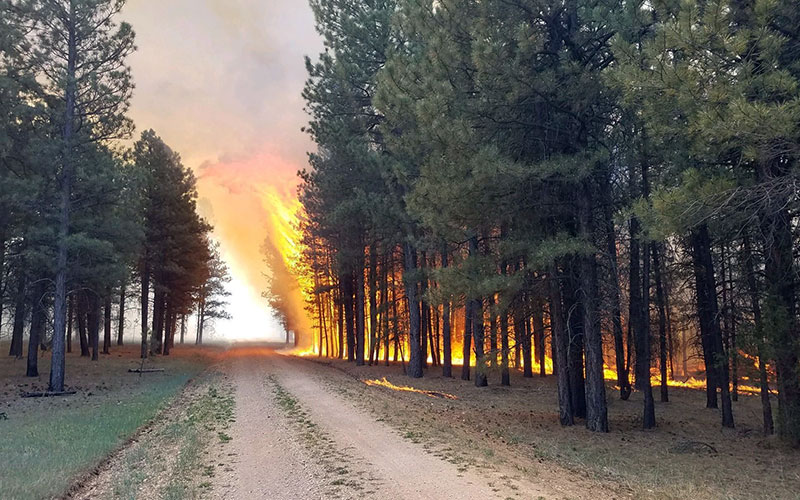 Fire activity on the north end of the Mangum Fire on June 14, 2020. (Photo courtesy of Inciweb) 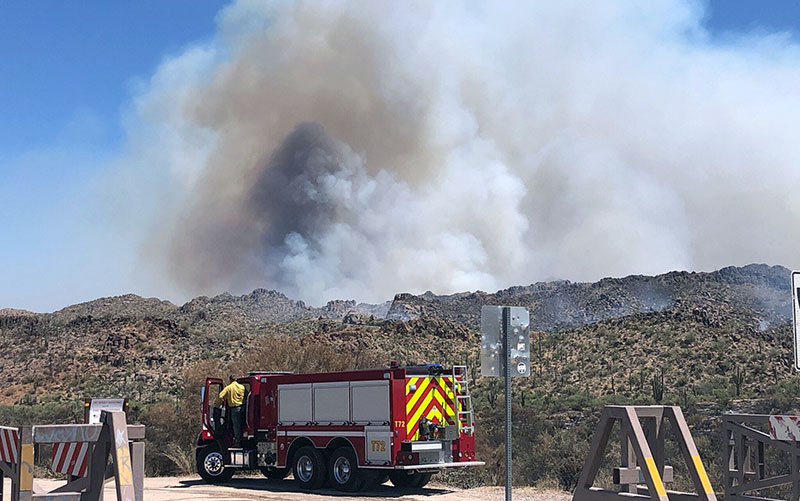 PHOENIX — Nearly 1,500 people living west of Roosevelt Lake have been forced to evacuate because of the fast burning Bush Fire, which on Wednesday was the largest in the country at 89,059 acres, according to the National Interagency Coordination Center.

The wind-blown wildfire, which was ignited by a burning vehicle Saturday, was moving fast through tall grass and brush in a section of the Tonto National Forest about 40 miles northeast of Mesa. On Tuesday night, it crested the iconic Four Peaks.

“It’s just been a real wind-driven event,” said Dee Hines, a public information officer on the Bush Fire. “This time of year, at the height of fire season, the fields are very dry, and I really think the size is primarily due to the wind.”

Those conditions have set the stage for what’s already an above average fire year in Arizona. Wildfire experts said the state already has surpassed the number of fires during the same period last year. The Bush Fire, which has scorched 139 square miles and was only 5% contained Wednesday, was just one of 12 fires actively burning across the state.

View the expansion of the #BushFire northeast of #Phoenix via #VIIRS Day/Night Band nighttime imagery from 6/13 to 6/16. The #fire started on the afternoon of 6/13 and has burned nearly 40 acres. Explore 6/16 DNB via @UWSSEC RealEarth at https://t.co/uNZL8PTkzm #AZwx pic.twitter.com/UxQeDc5xYq

Many residents of those communities were evacuated last June to escape the Woodbury Fire, which took nearly two months to put out.

North of Tucson, firefighters were gaining some ground on the Bighorn Fire in the Catalina Mountains. A lightning strike June 5 ignited the fire, which has burned 17,000 acres in a rugged part of the Coronado National Forest. The blaze has forced hundreds of people to evacuate, and its previous estimated containment date has been extended from June 25 to July 4, according to the Arizona Daily Star.

The Bighorn Fire was estimated to be 40% contained on Wednesday, Inciweb reported. Weather conditions and wind have pushed the flames toward Summerhaven, near the summit of Mount Lemmon, where residents were being evacuated.

The Santa Catalina Ranger District has an extensive forest closure order in place for parts of the Coronado National Forest, including Romero Canyon, Pima Canyon and Finger Rock, according to Inciweb.

Tiffany Davila of the forestry and fire management department said this is partly due to dry conditions and overgrown vegetation, as well as the sheer number of fires this year.

Firefighting tactics can be ineffective because by the time crews arrive, the fire has grown 50 to 100 acres, Davila said, adding, “There’s a multitude of factors that we’re concerned about right now.”

More than 95% of fires in Arizona this year were started by people. Davila said there are many steps people can take to help fight the increase in fire activity this season.

“We work throughout the year to do fuels-mitigation work to do prescribed burning to help alleviate it to decrease that risk,” she said. “But we need the public to help us out and create that defensible space around their property and build that buffer zone between their property and a potential wildfire.”

Here’s how you can help prevent wildfires in Arizona

Fire season peaks in June and July across the Southwest, according to the National Significant Wildland Fire Potential Outlook, which predicts a higher than normal potential for fires this summer. Fire experts predict drier conditions for early July, with some relief expected by the end of the month if the monsoon season arrives.

The largest wildfires burning in Arizona as of June 17, according to Inciweb.