Scientists spotted three pairs of vaquita marinas from Aug. 19 to Sept. 3, 2019. The “little sea cows” live only in the northern end of the Sea of Cortez. (Photo by Jay Barlow/Conanp/Seat Shepherd/Museo de la Ballena)

Poachers prize the totoaba because its swim bladder can sell for $80,000 a kilo on Asian black markets. But the illegal gillnets poachers use also ensnare and drown the critically endangered vaquita marina. (Photo courtesy of Sea Shepherd)

HERMOSILLO, Mexico – Two conservation groups are suing the U.S. government to force a decision on a 2014 legal petition seeking sanctions against Mexico for failing to stop illegal fishing that endangers the world’s rarest marine mammal, the vaquita marina porpoise.

Fewer than a dozen of the tiny mammals remain in the northern reaches of the Sea of Cortez, where they often get caught and drown in illegal gillnets used to fish for another endangered species, the totoaba. A thriving black market exists in China for the giant totoaba’s swim bladder, and the bladders are trafficked by some of the same Mexican cartels that supply narcotics.

The lawsuit, filed Thursday by the Center for Biological Diversity and the Animal Welfare Institute, demands the United States formally certify that Mexico’s failure to end totoaba poaching violates an international wildlife treaty, and sanction Mexico by prohibiting all wildlife imports, including seafood.

“The Mexican government has just utterly failed to enforce its obligation to end totoaba fishing that continues to entangle the vaquita,” said Sarah Uhlemann, international program director and senior attorney for the Center for Biological Diversity, which is based in Tucson. “And we are truly facing extinction of a species if the Mexican government does not take action.”

Uhlemann said conservation groups hope sanctions will force Mexico to crack down on totoaba poaching in time to save the estimated 10 vaquitas that survive.

Totoaba fishing is illegal in Mexico, and trading in totoaba is banned under a treaty known as the Convention on International Trade in Endangered Species of Wild Fauna and Flora because it’s an endangered species. The problem, Uhlemann said, is a lack of enforcement. 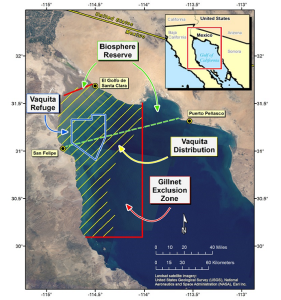 A map of the vaquita refuge and gillnet exclusion zone in the Sea of Cortez. (Graphic by National Oceanic and Atmospheric Administration)

“The lawlessness that’s being permitted right now can’t continue,” she said. “The answer is to get serious about enforcement. And the Mexican government has made lots of promises, but ultimately has just failed to follow through.”

Under pressure from conservationists, the United States already has banned seafood caught with gillnets in the vaquita’s habitat. But these sanctions could go further, Uhlemann said.

“If the government decides to use the full power of this ban, it could ban all seafood regardless of where it’s from in Mexico, as well as any other wildlife product,” she said.

If implemented, Uhlemann said, the sanctions likely would not greatly affect fishermen living near the vaquita’s habitat, who are already struggling with fishing-gear bans, the seafood ban and a lack of financial support from the Mexican government.

“Really, this is targeted at fishermen and other purveyors of wildlife in other parts of Mexico,” Uhlemann said. “And hoping that those people will make the same plea to the Mexican government to stop the lawlessness, stop the illegal fishing in the (vaquita’s habitat) that I know the fishermen there are asking their government to do.”