A protester approaches a line of police officers in downtown Phoenix on Sunday, May 31, before the imposition of a statewide curfew to rein in protests over police violence. (Photo by Blake Benard/Special to Cronkite News) 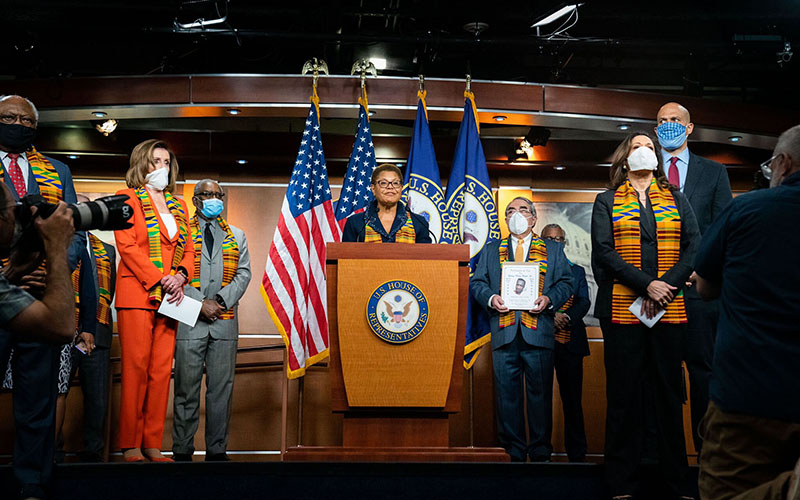 Congressional Democrats unveiled a sweeping police reform bill Monday that would ban the use of chokeholds and make it easier to hold officers accountable, a bill that one Arizona police group blasted as “one-sided” and “disappointing.”

At least three Arizona lawmakers are among more than 200 co-sponsors of the Justice in Policing Act of 2020, which comes after a week of nationwide protests sparked by the May 25 killing of George Floyd while in Minneapolis police custody.

Rep. Ruben Gallego, D-Phoenix, said the bill is needed to transform the relationship between law enforcement and the public. He was joined on the bill Monday by fellow Democratic Reps. Raúl Grijalva of Tucson and Greg Stanton of Phoenix.

“The Justice in Policing Act makes long-overdue changes to our criminal justice system by mandating the use of proven de-escalation techniques, increasing transparency, and transforming the culture and mindset of policing in America,” Gallego said in a statement.

But Joe Clure, executive director of the Arizona Police Association, said the “very one-sided piece of legislation” was drafted without any input from law enforcement officials.

“I think it’s disappointing that you have people who are putting together ideas and work plans for law enforcement and absolutely no law enforcement was consulted,” Clure said. “It is unfortunate it didn’t have a little bit more discussion so that there might have been an opportunity to find common ground.”

The 134-page bill said it aims “to hold law enforcement accountable for misconduct in court, improve transparency through data collection, and reform police training and policies.”

The bill would ban the use of chokeholds by federal officers and encourage local police departments to prohibit them as well, do away with no-knock warrants in drug cases and limit the transfer of military-grade weapons to in state and local police. It calls for increased funding to train officers to reduce racial profiling.

The bill would also create a national police misconduct registry aimed at keeping officers with abuse convictions from moving from one jurisdiction to another, and make it easier to sue officers for misconduct weakening the qualified immunity protection they currently enjoy for their actions.

It follows more than a week of protests across the U.S. demanding reform after the death of Floyd, a 46-year-old black man, who died after a white Minneapolis police officer kneeled on Floyd’s neck for 8 minutes, 46 seconds, despite Floyd’s clear pleas that he couldn’t breathe.

Also that day, Dion Johnson, a black motorist, was killed by an Arizona Department of Public Safety trooper during a traffic stop in Phoenix.

Among the demands of protesters in Arizona and across the U.S. were calls to defund police departments, but President Donald Trump said Monday that that’s not going to happen.

“There won’t be defunding. There’s not going to be any disbanding of our police,” Trump said during a roundtable with administration and law enforcement officials.

“Our police have been letting us live in peace and we want to make sure we don’t have any bad actors in there and sometimes we’ll see some horrible things like we witnessed recently,” he said. “But I say 99.9 – let’s go with 99% of them – great, great people and they’ve done jobs that are record-setting.”

But Grijalva said something needs to be done and that the bill “is a step forward toward real reform that removes the shield of immunity long faced by many police officers.” 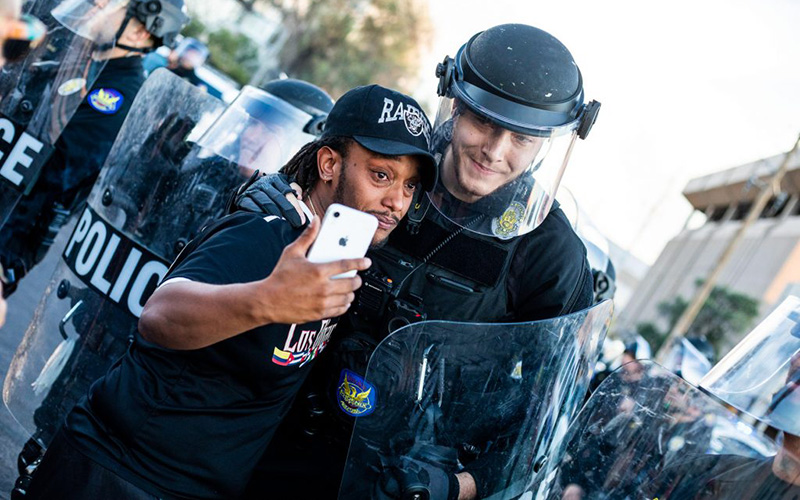 A protester takes a selfie with a Phoenix police officer during peaceful protests in downtown Phoenix over police misconduct. (Photo by Blake Benard/Special to Cronkite News)

“In the wake of violent police killings of people of color, Congress is taking the first step to bring reform, accountability, and transparency to police departments across the country,” he said in a prepared statement.

Clure said that some aspects of the bill are workable, but others are not.

“There are a few things in there that are certainly within the realm of possibilities, and then there are some things that are going to make it near impossible for individuals to police or engage in the profession of law enforcement,” he said.

He was particularly concerned about the proposal to weaken qualified immunity, saying it could put officers at financial risk.

At the news conference to unveil the bill, House Speaker Nancy Pelosi said Monday that the House is ready to act on the measure, and called on Senate Republican leaders to allow debate and a vote in the coming weeks.

Even then, Stanton said, the bill is just one of the first steps Congress needs to take to reform the system.

“We have a long way to go to fix long-standing, institutional biases and systemic racism. Every American has a responsibility to meet this historic challenge,” Stanton said in a statement. “And Congress must take this important step – the first of many – to ensure that no American faces greater danger simply because of the color of their skin.”