Zahid Valencia, seen celebrating his second national championship with Arizona State in 2019, is an example of a wrestler from the West who stayed in the region. (File photo by Travis Whittaker/Cronkite News)

TEMPE – Although wrestling is thriving at the developmental level in the West, the same can’t be said of the sport at Division I universities.

And it’s prompting some of the best young talent to head east.

Of the country’s 79 Division I programs, only 18 are west of the Mississippi River and just 10 are within the Pac-12 Conference’s footprint. The conference itself has only six members for wrestling and just three – Arizona State, Oregon State and Stanford – are true members of the conference. The other half – Cal Poly, Cal State Bakersfield and Arkansas Little Rock – are considered affiliates.

“There’s a lot of programs in the Pac-12 that I feel should have wrestling,” Fresno State coach Troy Stiener said. “There’s states that have large numbers in participation for wrestling and we don’t have a Division I program in Washington.”

The decline is counterintuitive to what’s happening with younger wrestlers.

Indeed, California has the largest participation numbers in the country, with 22,602, and five of the top 10 states, including Hawaii, Oregon, Washington and Arizona, could be deemed western schools.

Tucson native Roman Bravo Young, who wrestles for powerhouse Penn State, was among the athletes who headed east to compete. Young won four state titles in Arizona and went on to place eighth at the 2019 NCAA Tournament as a true freshman. 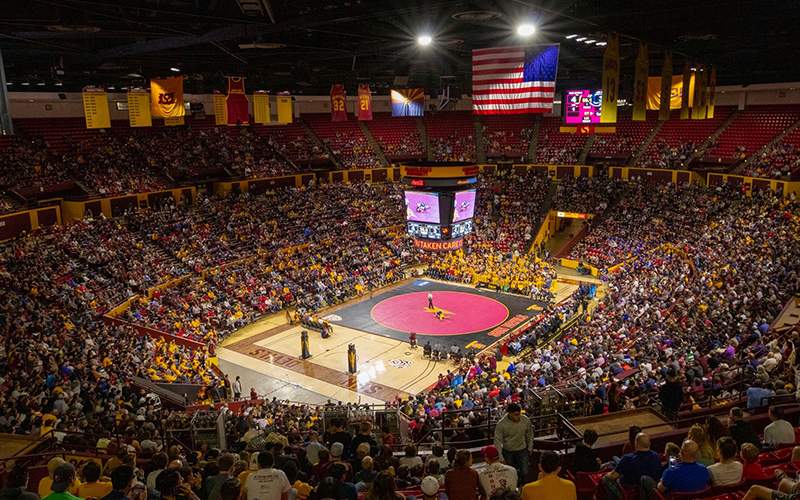 Arizona State wrestling set an all-time attendance record at a dual meet in Tempe in November when 8,522 fans came to watch the upset of No. 1 Penn State. (Photo by Travis Whittaker/Cronkite News)

The reasons are diverse, from Title IX compliance challenges to legislation passed by Power 5 conferences that allowed for cost-of-attendance stipends, thus adding expenses and often making Olympic sports the first casualties. What is happening in the West is symbolic of the decline of the sport at the collegiate level overall.

Because of the stagnant growth in the West, athletes who look to wrestle at the sport’s highest level often have to look elsewhere, including participating at a lower level of wrestling.

ASU has benefited from keeping West Coast talent close to home. Former ASU standout Zahid Valencia was one of the top recruits out of St. John Bosco High School, which is 20 minutes outside of Los Angeles.

In most polls, Valencia was one of the top three ranked recruits in the nation. Valencia finished his career as a two-time NCAA champion for the Sun Devils and a three-time All-American at 174 pounds.

“The Southern California area … certainly is starving for a top Division I program. It would be great to see a USC, UCLA start up a Division I program,” Jones said. “I would love to see it there. I know there are boosters there that would give considerable amounts of money to start a program. It needs to become a priority.”

California Baptist in Riverside moved to Division I recently but is in the required four-year transitional period. In 2017, Boise State dropped its program. Grand Canyon University announced it would move from Division II to Division I in 2012 but dropped the sport in March 2016.

Meanwhile, Fresno State participates in the Big 12 Conference, which is mostly in the Midwest, after its program was revived in 2016.

Why isn’t Fresno State in a closer conference?

“The Pac-12 wouldn’t let them in,” former Oregon State assistant coach Kevin Roberts said. “Fresno could have come to the Pac-12. The wrestling coaches would have loved it.”

The Pac-12 policy at the time was to not add any more affiliate programs into the conference as conference officials were satisfied with six schools. 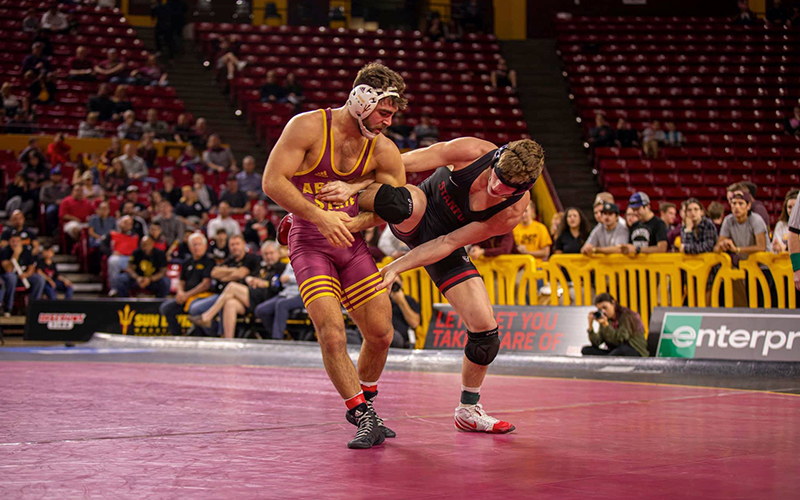 ASU’s Josh Shields, left, and Stanford’s Shane Griffith are among the wrestlers who compete for Pac-12 programs. (Photo by Travis Whittaker/Cronkite News)

Oregon dropped its program in 2007 but the Pac-12 was still fine with six members, When Boise State dropped, the conference became at risk of losing its automatic qualifier status for the postseason, as it sat as a five-team conference. The governing body of college athletics requires a minimum of six schools in a conference for the conference champion in a weight class to automatically qualify for the NCAA Championship.

“You need to have a conference sport that has at least six teams,” said Chris Merino, the senior compliance administrator for the Pac-12. “We have always been trying to stay at the level of six. So we have Stanford, Oregon State and ASU in terms of primary conference members who sponsor the sport, and so we have always been held to a max of three affiliate members.”

With the Pac-12 forced to rely on affiliate members, it appears to be heading toward a little more flexibility.

“The CEOs and the Pac-12 Council voted to at least allow on a case-by-case basis additional affiliate applicants,’ Merino said. “There are additional opportunities down the road.”

Preliminary conversations have started recently on the change of policy and what additional affiliate members could be good fits for the Pac-12.

Wrestlers from the West seek the best opportunity to compete at the highest level possible. Sam Shields-Colbray, left, and Anthony Valencia left their home states to wrestle at Iowa State and ASU, respectively. (Photo by Travis Whitaker/Cronkite News)

“Conferences with the exception of football and basketball are becoming more regionalized,” Jones said.

The sport of wrestling is starving for ways to expand in the West. Revived programs like Fresno State and California Baptist moving to Division I is a benefit, but the success is counteracted when athletic departments decide to drop the sport at other institutions.

ASU is one of the sport’s great success stories and may set an example for others. Less than two weeks after the athletic department announced the program was being cut in 2008, it said wrestling was being saved by private donors.

With added support from the Pac-12 and continued growth at the developmental level, many in the sport believe wrestling could get back to what it wants to be.

“We are looking forward to building and helping the Pac-12 wrestling brand grow,” Merino said.