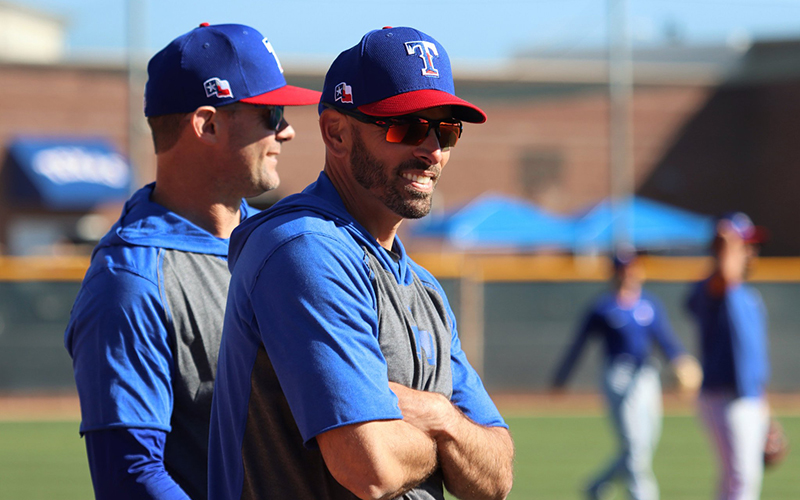 Texas Rangers manager Chris Woodward is staying at his Chandler home while baseball remains shut down because of the COVID-19 pandemic. (Photo by Reno Del Toro/Cronkite News)

SURPRISE – The 2019 season was Chris Woodward’s first as manager of the Texas Rangers, but his leadership style was years in the making.

He was looking forward to employing more of those lessons in his second season – before Major League Baseball shut down due to COVID-19. He and his wife, Erin, a nurse practitioner who has worked at Banner Desert Medical Center in Mesa, are staying home in Chandler.

“With my wife being a health care worker, it’s obviously important,” Woodward told reporters during a conference call recently. “Regardless of that, we’re just trying to help as much as we can. We have a lot of family, friends, and people that are really struggling right now in the world, in our communities – in Arizona where we live, and also in Texas – we know people are really struggling through this whole situation. We’re just doing anything we can to help in any way possible.”

And although he misses baseball, he understands why the season was put on hold.

“It is tough, but the good thing is we have a lot of time,” Woodward said. “My mind is always going back and forth, trying to stay informed with the latest is with the virus, how it’s spreading, and trying to keep our family safe. But I try to communicate with our guys everyday – at least half the team or a third of the team and staff everyday. I reach out to let them know I’m thinking about them, see how they’re doing, see what they’re doing to stay safe. Then obviously on the baseball side, to make sure they’re trying to stay as ready as possible.”

Before his coaching career began in 2013, Woodward played in parts of 12 major league seasons with six franchises. He saw managers and coaches come and go, including Hall of Famer Bobby Cox and former Red Sox and current Indians skipper Terry Francona.

Playing under managers like this provided Woodward with a lot of inspiration for his managerial career, and it gave him an idea of what style clicked from a player’s perspective.

“I definitely had examples of what not to do; obviously not pointing fingers to one particular person, but those are learning things. Those are things that you learn, like, ‘OK, what feels right, what doesn’t, what’s the best way to motivate a guy better.'”

Although his rookie season in Arlington wasn’t without its ups and downs, it was overall successful considering some of the factors at play. Star outfielder Joey Gallo missed more than 90 games, and the Rangers had only two pitchers who started more than 18 games, but they still managed to improve from 67 wins in 2018 to 78 last year. According to Woodward, his players’ willingness to embrace change was a big reason they made strides.

“I think they adjusted last year and realized fairly quickly the expectations and standards that we set out,” Woodward said. “They rose up to that fairly quickly. This isn’t a cult where it’s, ‘Hey, you got to buy in or else.’ This is for their benefit. I think they understand that. They’ve fully embraced that everybody here has a purpose to make them better players, which in turn will make us a better team and in turn make their lives better financially.”

In Woodward’s eyes, communication may be the most important part of his job. He doesn’t lecture players in his clubhouse, he tries to make them feel comfortable while giving them the tools to maximize their production.

“I’m not here to tell them what to do, I’m here to help them understand how to improve,” Woodward said. “Coming from a finger-pointing place, typically you get (a negative) reaction, but when there’s care and love and, ‘Hey man, we want to make you the best player possible,’ people tend to be a little bit more open to that.

“If we had one game to play and the world ended tomorrow, I’d probably motivate a little differently, clearly. Back-against-the wall typically gets a lot out of a guy, but there’s no long term in that. I’m trying to get these guys to be good for as long as we have them.”

This focus on longevity is a big reason why Woodward has chosen to take a more hands-off approach to managing. Building relationships is a vital step in reaching this goal in his view, and his way of achieving this means walking the line between promoting positivity and pushing players to take the extra leap.

“Obviously, a positive state of mind is a healthier state of mind,” Woodward said. “That doesn’t mean we’re all happy and joyful in the clubhouse. We’re working hard and we’re getting after it. We’re challenging these guys every day, but with a positive, optimistic outlook on things to keep our bodies and minds healthy.”

With the MLB season postponed due to the pandemic, Woodward must wait to improve upon his solid debut. When baseball does resume, though, he has high expectations for these Rangers.

“I think we’re always making adjustments in what we do, but I think we’ve really taken everything a step further,” he said. “I think our players are ready for more. They’re ready to take things to a deeper level as far as how we do things and why we do things. It’s cool to see that. Our staff is the same. They’re also pushing a bit harder. It raises the stakes a little bit, and I want our guys to embrace that.”