Among the things Arizona Coyotes player say they miss most during the postponement of the NHL season is the camaraderie with teammates. (Photo by Jenna Ortiz/Cronkite News)

PHOENIX – In the midst of uncertainty surrounding the NHL season, Arizona Coyotes defenseman Jakob Chychrun finds solace in the piano handed down from his grandmother.

“She always says that now that I have it in my house that it’s like I always have a little piece of me with her, so it’s really special,” the veteran said.

Chychrun isn’t the only Coyotes player with time on his hands after COVID-19 concerns put the NHL season on ice March 12. Clayton Keller, for instance, is reading more books, and Alex Goligoski has found solace in mountain biking.

Although players’ physical fitness during the pandemic is important to teams, so, too, is their emotional well-being. The team concerns range from making sure players stay busy to providing services for mental health issues.

“It’s hard to go from a routine every single day to having absolutely nothing to do throughout your day,” Chychrun said. “I think doing the best you can to have that routine, whether it’s as simple as setting an alarm, making your bed, making yourself breakfast or going for a walk.”

In January, the Coyotes were one of 15 NHL teams to host an evening dedicated to mental health. Yotes Talk Night was sparked by the NHL’s “Hockey Talks” initiative intended to encourage conversations about emotional well-being after the high-profile suicide of Vancouver Canucks forward Rick Rypien, who suffered from clinical depression.

Arizona ranks 36th in the nation in access to mental health care, according to a 2020 report from Mental Health America.

Finding a way to stay occupied is a priority for Coyotes players, especially because they have time to reflect on the direction of their 2019-20 season.

Although they struggled late, the Coyotes remained in the hunt to reach the playoffs for the first time since 2012, and had the right pieces in place.

Keller rediscovered his rhythm. The forward had 11 points in 14 games after a 12-game stretch with a single point.

Goligoski surpassed his point total from last season after stepping into a larger role on defense when Niklas Hjalmarsson missed three months with a fractured fibula. He led Coyotes defensemen in points at 32 and averaged 23:03 of ice time per game, the most on the team.

Nick Schmaltz found his place in his first full season with the Coyotes after missing the last four months of the 2018-19 season with a lower-body injury. The forward totaled a team-leading 45 points, with 11 goals and a career-high 34 assists.

Chychrun was in the middle of his best season with a career-high 26 points, including five powerplay goals. A lower-body injury on Feb. 19 halted the defenseman’s campaign, but he was days away from returning for their playoff push.

“We had 12 games left, eight at home. I think everyone was super excited to make a big push for that and take the next step for our team,” Keller said. 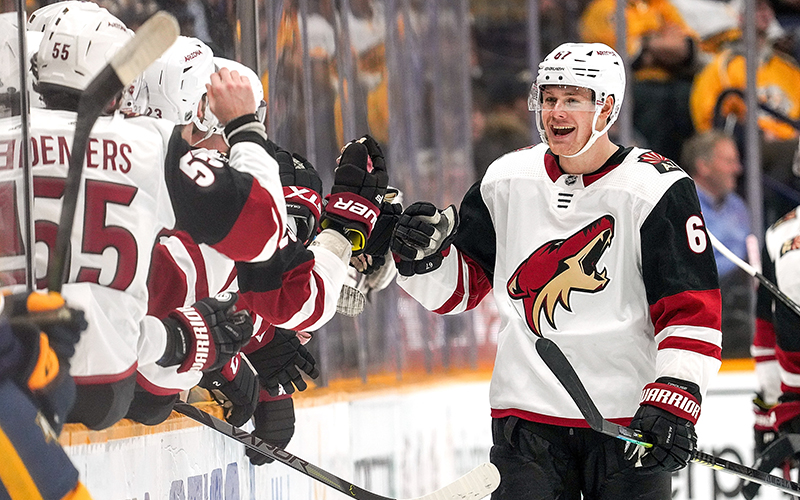 The rush of scoring a goal and sharing the moment with your teammates, as Jakob Chychrun did against the Nashville Predators in December 2019, is something Arizona Coyotes players say they will look forward to when the season resumes. (Photo by John Russell/NHLI via Getty Images)

The Coyotes were wrapping up a dominant season at home with a 17-12-4 record, outscoring opponents 103 to 81.

“We had a good mix of veterans and young guys bringing energy when we needed it, just a good, fun group that all had the same goal in mind from Day 1,” Schmaltz said.”Who knows what would have happened?”

All their work came to a halt March 12.

The league’s response to the COVID-19 pandemic was understood by players, but they had to quickly adjust to life without hockey.

“The first week or two, once everything stopped, it was pretty hard,” Goligoski said. “We went from going at such a high pace of travel and games to completely stopping. It was a little weird in that sense.”

Arizona’s stay-at-home order has players spending more time in their residences than accustomed. They must fight through the temptations of staying on their couches and playing more video games than they should, several said.

“I’m just trying to find as many things as I can do to take my mind off of what’s going on and pass the time,” Schmaltz said.

Players also have to prepare themselves mentally if the season were to be canceled.

“I’m just taking it day-by-day,” Keller said. “Everyone knows what’s best to do, and if that does happen, it would obviously suck. Health is the main thing right now. It’s almost like an offseason at this point.”

The players find themselves in uncharted territory. The unprecedented postponement gives them more time to reflect on their careers.

“I mean, none of us have really been through something like this, it’s pretty wild,” Schmaltz said. “We’re thankful for everyone putting their safety on the line to make sure we’re doing alright. When this is all over, we’ll look back at it and be thankful for where we are and the game we get to play in front of the fans that support us every night.”

While the league is assessing possible solutions to the current season, Coyotes players are constantly communicating with each other updates from the league and players’ association. At this point, the players are left with many “question marks” about how it will unfold.

Would there be fans?

“I don’t think anyone’s going to want the season to end and have no playoffs and no Stanley Cup. But it’s really not up to us,” Chychrun said.

The uncertain times have revealed silver linings, including connecting with family and catching up with old friends.

“My dad’s here in Arizona,” Keller said, ‘and I’ve been able to spend more time with him, which I don’t normally get to do, so that’s been really nice.”

Keller’s dad has helped his 21-year-old son to not dwell on the season’s fate but to look for positives.

Chychrun’s parents were visiting him when the season stopped and are now quarantined with him in his newly completed home in Arizona.

“They’re kind of spoiling me,” he said. “It’s nice. They make me breakfast, lunch and dinner every day.”

Chychrun also FaceTimes his sister and grandparents almost daily and checks in with family friends. And he’s grateful for his piano, which he is learning how to play thanks to an app, and calls his grandmother “the cutest person in the world.”

“She’s getting old now, I think she’s 85, but she does her workouts every day,” he said. “She walks every morning and stays active. She’s awesome.”

Players with children are taking advantage of their extended time. Goligoski is chasing around his two kids and finishing odd jobs around the house. His current project of repainting cabinets has kept him busy.

Riding trails isn’t the only thing he has rediscovered during the paused season. He’s talked with friends from back home in Minnesota he hasn’t heard from in awhile.

“Things get busy, everyone’s running around, we all have kids now,” he said, adding that he’s grateful to reconnect.

Chychrun said losing the connection with teammates on short notice was a “weird and tough” situation. Still, players are getting creative with how they interact digitally. 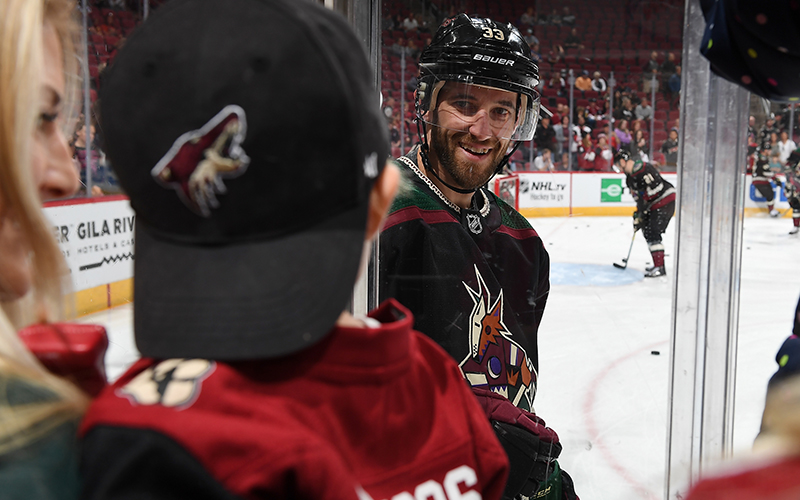 Because he can’t connect with fans now that the NHL season has been postponed, the Coyotes’ Alex Goligoski has turned to mountain biking. (Photo by Norm Hall/NHLI via Getty Images)

Goligoski joins other couples on the team for games over Zoom. Keller and Schmaltz compete together on Xbox, along with messaging other younger Coyotes players in a group chat.

“We miss each other. We go from seeing each other every single day to nothing at all,” Chychrun said. “They’re like your family, so it’s hard not to see the guys when you’re supposed to be seeing them.”

This year’s group felt even closer after moving into first place in the Pacific Division at one point in the season.

“Everyone was super excited to take the next step and it was such a fun group to be a part of,” Keller said. “I definitely do miss that.”

Goligoski, a 13-year veteran, called this team “the tightest group of guys I’ve ever played with.”

“It’s a real close-knit locker room,” he said. “Everyone hangs out with everybody and really enjoys each other.”

When play does resume, all expect to be even more grateful for the friendships made and the game they love.