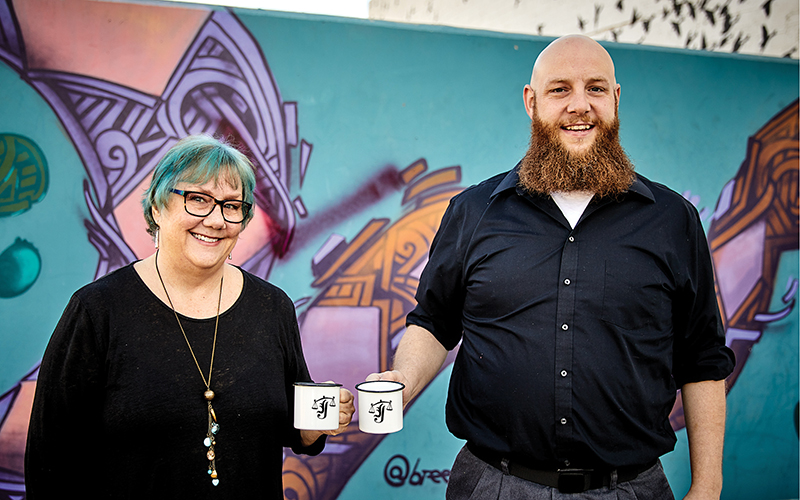 The owners of Justice Java, Vicky and Dustin Campo, plan to provide employment and a safe working environment for people who were formerly incarcerated. Dependable employment is key to keeping former prisoners from reoffending, experts say. (Photo courtesy of Vicky Campo)

PHOENIX – Dustin Campo knows how difficult it is to find work after prison, so he and his mother, Vicky, are opening a pop-up coffee shop that will give formerly incarcerated people a livelihood.

The co-owners of Justice Java: Cold Brew With a Cause plan to give former prisoners a second chance at life after paying their debt to society and reduce the stigma that follows them.

Dustin Campo, 36, a convicted sex offender on lifetime probation for a crime committed 10 years ago, said earning a second chance after prison has been a challenge.

“You come back out and everyone assumes that when you come back out you get your dignity, your rights and all of that – you don’t,” he said. “It’s really just the beginning of the punishment.”

Arizona ranks fourth, behind Louisiana, Oklahoma and Mississippi, for mass incarceration, according to a report by FWD.us.

With hundreds of prisoners released each year, life after prison for some isn’t an easy path. Studies have shown that a criminal record can hinder finding a job – which is crucial to reducing the likelihood of reoffending and landing back behind bars. But once those formerly incarcerated gain employment sometimes their past actions can lead to being laid off.

Criminal justice advocates around the country have pushed for second-chance criminal justice reform policies, including “ban the box,” which prevents employers from asking applicants about their criminal histories, and the expungement of records, which allows formerly incarcerated individuals to move on with their lives. 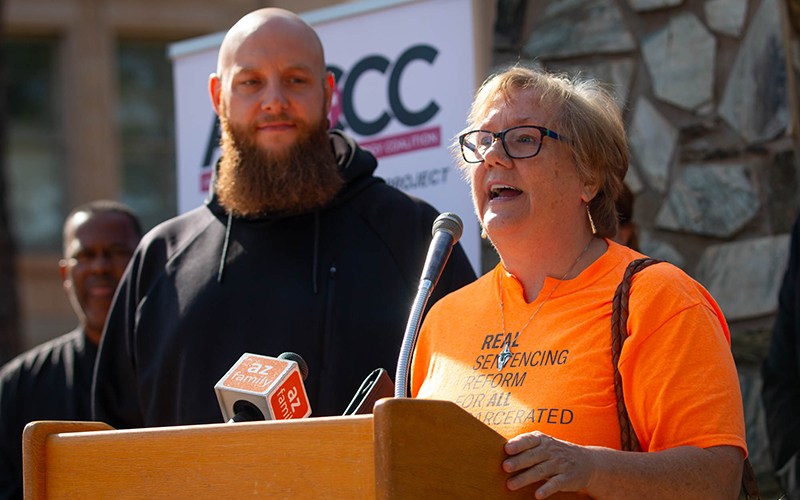 Vicky Campo advocates for her son, Dustin Campo, who was formerly incarcerated, at a January rally at the Arizona Capitol. “Everyone now is being overcharged, over-sentenced, over-incarcerated and then over-supervised when they get out,” she said. (Photo by Delia Johnson/Cronkite News)

The idea behind Justice Java started after Dustin was released from prison after serving five years and tried to navigate a new world.

Dustin was 26 when he had sex with a 14-year-old girl, a member of a family he was living with at the time. He was convicted of child molestation in 2011.

“Since his release,” said Vicky, 63, “my son has not been able to find meaningful work.”

In the more than four years since his release, Dustin has cycled in and out of call center jobs.

As a registered sex offender, Dustin said he isn’t allowed to own a computer or a smartphone and has internet restrictions, even though his crime was not related to the internet.

“How is a person supposed to find a job and sustain themselves if you can’t use the thing that everybody uses to find jobs?” he asked.

He said before starting Justice Java he would go to places like Goodwill and Arizona at Work to find leads for employment.

Dustin said he was laid off after six months because of his criminal record, but his employers knew about his record upon hiring.

“At one job,” his mother said, “he was put in for a promotion to become an IT guy after they had him training people because he was good at the phone. They said you should apply and be the IT guy, he put in his application for that position and HR comes back and says we have to fire him.”

Dustin has had as many as 10 different jobs a year, where in some cases his criminal history got in the way of his employment.

Not being able to maintain or find decent employment has caused Dustin to sometimes fall behind on probation fees, which cover the cost of his supervision.

According to the Prison Policy Initiative, two-thirds of people nationwide on probation make less than $20,000 per year.

“We talk to people with drug offenses and all kinds of offenses and they can’t find work either,” Vicky said. “They are living the same life.”

Dustin’s lifetime probation made it difficult for them to find places to be a vendor at.

“We have to be mindful, are there children around?” Vicky said. “We’re not going to be at the children’s petting zoo selling coffee. We’re going to be at tattoo parlors, First Friday and criminal justice reform events.” 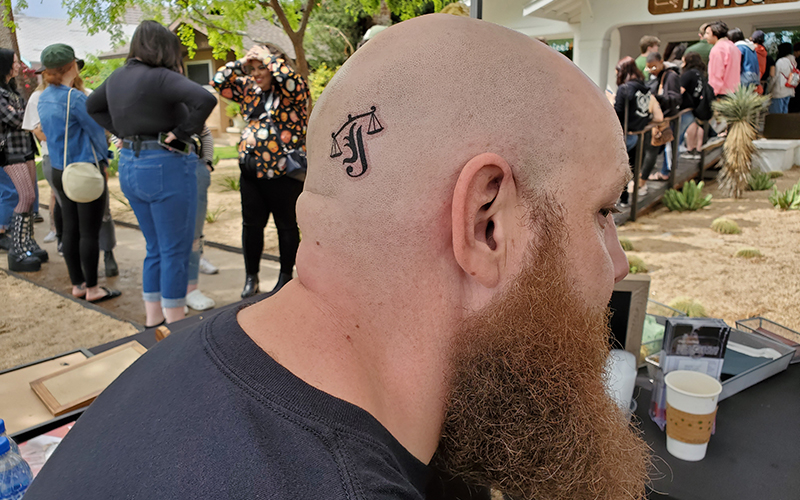 Dustin and Vicky’s goal with Java Justice, which has been placed on hold since the COVID-19 pandemic, is to work with local businesses and provide locals with employment opportunities to keep money circulating in the economy.

Kara Williams, an organizer for the ACLU of Arizona’s Campaign for Smart Justice, served two prison sentences for narcotics-related crimes and has been directly impacted by employer discrimination.

“I’ve always worked in the service industry where they don’t do background checks. I’ve been a server and a bartender my whole adult life,” Williams said. “When I came home (from prison) now that I had to check that box that I was a felon, I couldn’t even get people to interview me.”

Criminal justice advocates like Rushdan and Williams are calling for policies that embrace second chances, including the expungement of criminal records.

“In Arizona, the justice system does not equal rehabilitation,” Rushdan said, “Justice equals punishment and that punishment comes from a mindstate and a culture that has not changed to embrace any form of a second chance.”

State Sen. Martín Quezada, D-Glendale, introduced Senate Bill 1437 in 2019 that would prohibit private-sector employers from asking applicants’ about their criminal histories until they have been offered an interview or offered employment. The bill ground to a halt in the House of Representatives.

“The bar is set low on this ban the box,” Rushdan said.

He said even though the employer doesn’t ask applicants’ about their criminal record on the application “the companies are still going to conduct a background check.”

“Which to me, it really messes with the person … when they get an interview and may get a start date and they turn around and get an email saying that their background did not check out, so we can’t hire you,” Rushdan said.

Other states like Pennsylvania and Utah have implemented clean slate laws that will seal the records on some convictions.

“When we talk about clean slates and identifying each one of these people as human beings and building environments where families are coming back together, you don’t have it if you can’t allow a person to expunge their record,” Rushdan said.

Having a criminal record can cause an individual to be denied employment, housing and for small business owners with a criminal past, which means being excluded from coronavirus relief funding.

The Paycheck Protection Program passed by Congress to help small business during the pandemic excludes businesses if the applicant has 20% or more ownership of a company and if the applicant is in jail, on probation, on parole, is under indictment, will soon be arraigned, and or pleaded guilty or no contest or was convicted of a felony in the past five years.

“You have several people who are incarcerated working state, city and county jobs. You have people confined making clothes that people wear, food that people eat right in our prison system,” Rushdan said, “But then these people come out and they get dumped on.”