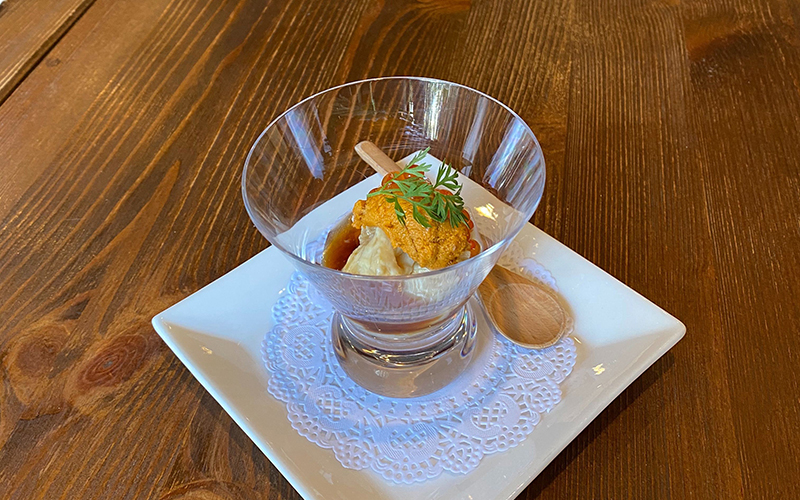 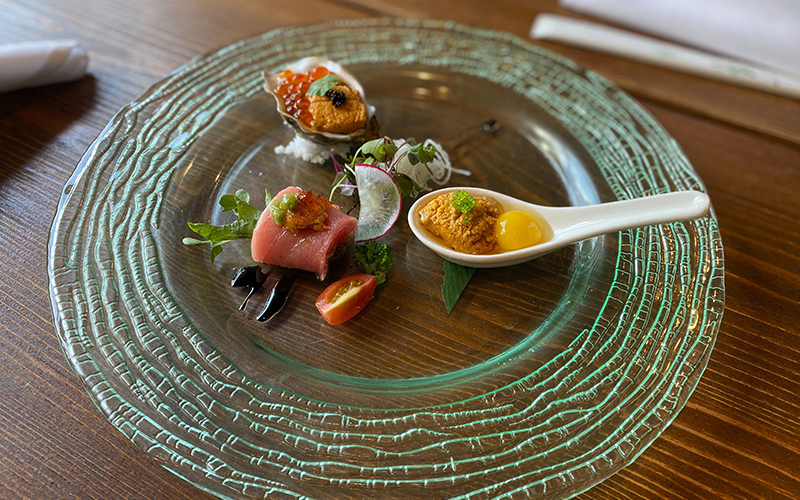 Sourcing uni – the gonads of sea urchins – can be difficult due to limited supply and restaurants, forcing Miyabi Uni to import urchins from other countries. (Photo by Caroline Yu/Cronkite News)

A “ranched” purple sea urchin, right, is bigger than its wild cousin, which also produced no gonads, known as uni. Scientists have developed a feed that “fattens” urchins so they produce uni that can be sold to restaurants. (Photo courtesy of Urchinomics)

LOS ANGELES – Considered a delicacy around the globe, sea urchins please the palates of the wealthy, showing up on sushi bars and swirled into pasta at fine restaurants. However, these spiny creatures in recent years have plowed through forests of bull kelp along coasts around the world.

Sea urchins pose a problem to kelp forests, which are an integral part of shoreline ecosystems because they provide food and shelter for fish, shellfish and sea otters. Bull kelp forests in Northern California decreased by more than 90% in 2014 because of warming waters, and they’ve been struggling to recover since then.

What’s to blame? Hungry purple sea urchins, according to Sheila Semans, the executive director at the Noyo Center for Marine Science in Fort Bragg.

“What we understand is this was sort of a perfect storm of events,” said Semans, whose marine protection and restoration group is working to slow the urchins’ population growth and “help the kelp.” 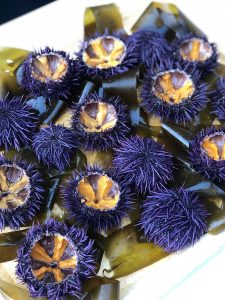 Urchinomics has operations in Japan, Norway, and California, where the group is testing the viability of its algae-based feed. (Photo courtesy of Urchinomics)

A marine heatwave that was discovered in 2013 – nicknamed “the Blob” – has caused such problems as toxic algae blooms, vanishing sea species and many other issues affecting the health of the oceans and fisheries.

Due to higher water temperatures, the Blob has negatively impacted many underwater ecosystems like that of the purple sea urchin, which now face starvation and overgrazing.

In Northern California, the problem began with a sudden, unexplained die-off of sea stars, the urchin’s main predator. Semans said researchers blamed a disease that’s thought to be caused by warmer water. The warmer water also stunted kelp growth at a time when the urchin population blew up and consumed the limited kelp supply.

The Noyo Center is part of the Kelp Ecosystem Landscape Partnership for Research on Resilience, which is composed of governmental organizations, nonprofits, academic institutions and for-profit businesses working to further the restoration of kelp forests.

“In the last two years, we realized that what we need to do primarily as a first step is clear some urchin out of the environment,” Semans said.

The organizations have been testing out solutions, like diving to manually “smash” the urchins, to decrease the sea urchin population size. One of these partners, the Bodega Marine Lab at University of California, Davis, has been working with a company to test the viability of sea urchin “ranching.” 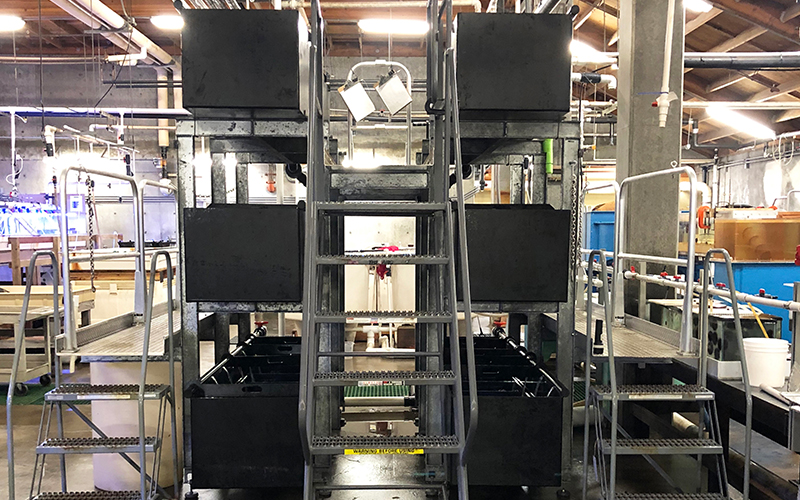 In partnership with the company Urchinomics, the Bodega Marine Lab at University of California, Davis is testing a type of feed for urchins captured in the wild. (Photo courtesy of Urchinomics)

Although the die-off of sea stars allowed sea urchins to flourish, there is a predator who could help control the population: humans. Through ranching, scientists hope to sustainably control the sea urchin population by capturing and preparing them to sell to consumers.

The sea urchins the lab collects in the wild actually are starving, despite their voracious appetites for kelp, said Laura Rogers-Bennett, lead scientist for the lab. She has spent three years testing ranching practices that help save kelp by giving the urchins something else to eat.

“All the food resources (and) algal resources are scarce,” Rogers-Bennett said.

Divers remove urchins from affected kelp beds, and those that seem the most promising are sent to the lab to be “ranched and fattened up” for commercial purposes, Rogers-Bennett said.

“The idea here is that if we can remove hungry urchins from the wild where there are too many of them and we can (also) develop some sort of an economic incentive to do that removal effort,” she said.

The lab has been working closely with the company Urchinomics to develop and test a type of algae-based feed that helps the urchins grow and produce uni – the urchin’s edible gonads. After they complete testing, the company plans on opening commercial operations in the U.S. and begin selling purple sea urchins to restaurants.

“Our mandate is to work with them so that whatever revenues we make on the urchins, a portion of those proceeds can go back into the restoration effort so it’s like a full cycle,” said Denise MacDonald, director of Urchinomics.

The company has already tested operations in Japan with much success, MacDonald said. During its trial run, it sold uni at roughly $9 per unit, which is comparable to industry standards. The uni was well-received and apparently “sold out in minutes,” she said. 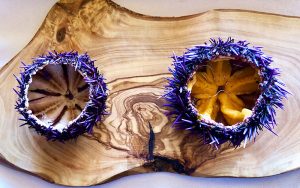 Scientists have developed an algae-based feed that “fattens” urchins so that they produce uni, which can be sold to restaurants. (Photo courtesy of Urchinomics)

Uni is the highly prized, soft gonads inside the urchin’s spiney casing. Some people love uni for its luxurious and “creamy” texture, while others have trouble overcoming the pungent ocean taste.

Miyabi Uni in Torrence specializes in unique uni dishes. In addition to traditional uni sushi, the restaurant also offers such dishes as an uni “shooter” and uni cream pasta.

The owners wanted to create a place that could be a kind of “heaven of the sea urchin-lovers,” manager Shintaro Yano said. The restaurant has seen a rise in popularity due to uni’s intriguing nature, and Yano said it is surviving California’s COVID-19 restrictions through deliveries and takeout.

Because sea urchins in the wild are running out of kelp, Yano is concerned that high quality uni will be hard to find. The restaurant has had to source their product from all over the world.

“This year we were having a hard time getting supplied from the vendors,” he said.

It’s even harder to find a local fishery or distributor to supply the restaurant with the needed amount of urchins, so they import the majority.

Urchinomics is driven to help save the kelp ecosystems, but it hopes to create new economic incentives for areas affected by the rampant purple sea urchin population.

“There’s a lot of fisheries that have closed along the Pacific Northwest and Northern California,” MacDonald said. “And we want to try to bring jobs back to these communities as well.”

With the business that Urchinomics intends to open, jobs in the fishing industry will be needed.

“I think that we are only a minor part of the overall solution,” MacDonald said. “We’re actually helping create jobs and helping the local economy and getting divers in the water using those urchins.”