Former Arizona State basketball player Michelle Tom, who is now a doctor at the Little Colorado Medical Center, said staff members “probably have the most limited resources and fewest beds for a facility for 17,000 people.” (Photo courtesy of Michelle Tom) 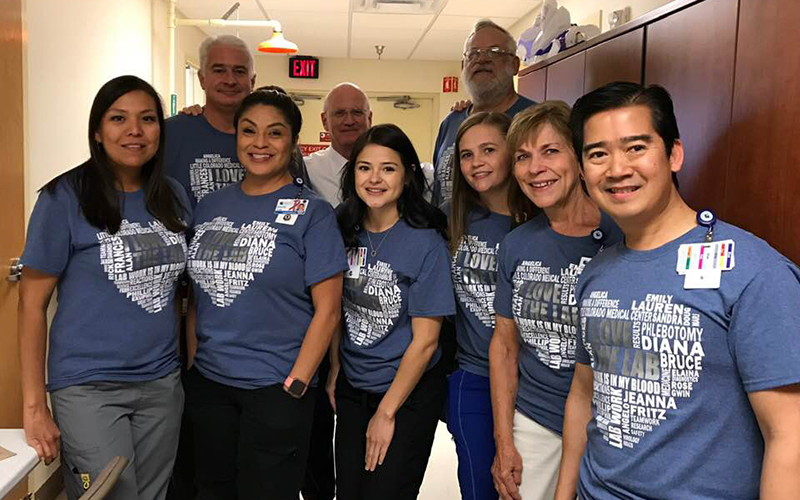 Staff members at Little Colorado have two ventilators, 22 beds, five OB beds (like a stretcher) and one emergency room doctor during the day, Tom said. They have two ambulances and are hoping to get a third soon. (Photo courtesy of Michelle Tom)

PHOENIX – The life of a college athlete can be stressful. Balancing academic and sports or taking the game-winning shot against a Top 10 team involves pressure.

Former Arizona State basketball player Michelle Tom did both, including a buzzer-beating 3-pointer to down No. 7 Washington in 1999. Now she deals with more serious stress: treating coronavirus patients in an underfunded community hospital for Native Americans.

Tom works for the Little Colorado Medical Center in Winslow, her hometown, which is on the border of the Navajo Nation. Growing up on the reservation and going to high school in Winslow, Tom wanted to return home after her time at ASU to work with her community.

She told her ASU coach, Charli Turner Thorne, and Turner Thorne’s mother counseled Tom to pursue a master’s degree in public health and get through medical school. Tom did.

“One of the most persistent young women I’ve ever had the honor to coach or be around,” Turner Thorne said.

It was a path that put a lot of weight on her shoulders, but is especially true during this pandemic. She’s a physician, but has had to help out at an urgent care facility at night because the site is so busy.

“We are seeing a rise in patients with symptoms like cough, fever, chills, body aches,” Tom said. “We have a lot more positives coming. It rises every week. We project in our area that at the end of May will be our peak.”

The Navajo Nation has been hit especially hard during this crisis. The total number of positive tests has reached 1,321 and confirmed deaths 45, according to the Navajo Department of Health and the Navajo Area Indian Health Service.

This is largely due to the conditions in which many people live on the reservations.

Tom said the small, rural hospital where she works reached its maximum capacity last week, and it resulted in a case-by-case decision on whom to admit. The hospital only has two ventilators, 22 beds, five OB beds (similar to a stretcher) and one emergency room doctor during the day. They are hoping to get a third ambulance soon.

“We probably have the most limited resources and fewest beds for a facility for 17,000 people,” Tom said.

With so few doctors and a growing number of patients, personal protective equipment (PPE) becomes vital, but that has also been hard to acquire. Tom said it takes at least a month to deliver supplies such as masks to the hospital, and they never get dates for when to expect a new shipment.

The staff has had to get creative with makeshift surgical masks sewn together and plastic folders cut into visors and attached to foam with super glue. Meanwhile, Tom paid out of her own pocket for a shipment of masks from someone she knows in manufacturing.

Tom said one of the best ways to help the situation at her facility is to donate or send PPE, such as N95 masks, surgical gowns and Hazmat suits. Tom stressed that if the doctors get the virus, there won’t be anyone left to care for the patients. 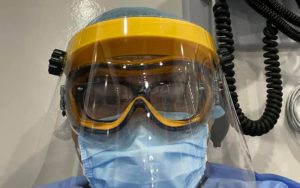 Michelle Tom was encouraged to pursue medical school by ASU women’s basketball coach Charli Turner Thorne, who called her “One of the most persistent young women I’ve ever had the honor to coach or be around.” (Photo courtesy Michelle Tom)

Tom said she would also like to enlist an engineer to develop a negative-pressure room, a way to isolate a patient, but the hospital does not have the funds to hire anyone.

“We’re losing so much revenue as it is already,” she said.

Little Colorado is a nonprofit public hospital that has been largely overlooked, but Tom has garnered more media attention recently.

CBS and NBC reporters interviewed her afterward. The attention has already proven helpful. An ER doctor sponsored by mattress company Tufts and Needle donated two intubation boxes, which Tom describes as a clear box with one side open for the patient’s head and two holes for the doctor’s arms.

Tom also got the inside track on a planned item that could be beneficial to the hospital.

“The NBC news person knows a guy from NASA, from NASA Aerospace in Northern California, who has a prototype,” she said. “It’s like a hood, it’s called CPAP, continuous positive pressure. It’s going to have oxygen going in suction because right now we can’t use CPAP because it aerosolizes everyone around you, so he’s trying to develop one that goes over the head. He said I would be the first one; we would get it before anyone else in the country. So that’s awesome.”

There is still help needed across the country, however, and a lot of it is required at Little Colorado. In basketball terms, this is a team effort and the medical professionals are the star players. Everyone else needs to do their job to get them the ball, the supplies and resources and exposure they need to score, or beat the virus.

Maybe the attention will further help Tom, who has had to quarantine in her co-worker’s home away from her family during the crisis.

“I hope it directly helps her situation,” Turner Thorne said. “She’s trying to serve 17,000 people and they never got any federal supplies. They got some in Window Rock and some of the other communities on the reservation. They (Little Colorado) didn’t.”

Tom’s primary message to anyone at home is to stay there.

“The more people stay home and are mindful and not sharing this disease is the only way I think that the numbers are going to come down,” she said. “It’s all spread by people. That’s all it is. And if we stop spreading it, it goes away. It just goes away. So, don’t go anywhere you don’t need to.”