After Arizona State quarterback Jake Plummer was drafted by the Cardinals, he still played his home games at Sun Devil Stadium. (Photo by Stephen Dunn/Getty Images)

PHOENIX – By the time the 1997 NFL Draft rolled around on this day 23 years ago, Jake Plummer had already built quite the reputation among Arizona football fans.

The quarterback from Boise, Idaho, had just concluded one of the most decorated careers in Arizona State history. Plummer took over as the team’s starting signal caller early into his true freshman season back in 1993, and he then proceeded to rewrite ASU’s record books in his four years there.

By the time his career as a Sun Devils quarterback concluded, Plummer held school records in both total offensive yards (8,711) and passing touchdowns (65). According to former ASU offensive lineman Kyle Murphy, who blocked for the All-American quarterback for three years, Plummer’s leadership skills were as impressive as his talents between the lines.

“He understood what his team needed and when they needed it,” Murphy said. “Whether that was getting up in your face and letting you know about it, whether that was encouraging you, or whether that was making things happen on his own because that’s just what needed to be done.

“You envision athletes are competitive and they’re alpha males and females, so when you’re able to, for lack of a better word, manage those people, it says a lot about who you are, and he was able to do that,” Murphy said. “And not through, ‘Hey, look at me. I’m the quarterback, so you have to listen to me.’ He did it naturally, so it was easier to receive. It wasn’t, ‘Hey, you guys have to do what I’m saying.’ It was, ‘Hey, this is what we need to do to be successful.'”

Plummer’s time as starting quarterback also coincided with one of the most successful seasons in ASU history. In 1996, a senior Plummer led ASU to an 11-1 season and a historic upset of then-No.1 ranked Nebraska, who had been riding a 26-game win streak heading into their matchup. The Sun Devils went on to earn their second-ever (and latest) Rose Bowl appearance that year and came within minutes of likely being crowned national champions. A last-minute touchdown by Ohio State sunk their title hopes, but Plummer’s performance in this game and the season in general started to put him on NFL radars.

“He definitely improved his stock in ‘96,” said Scott Bordow, a Cardinals beat reporter for The Athletic who worked as a local sports columnist in Arizona at the time. “He was arguably the best player on a team that came within 100 seconds of a national championship, and he had a knack for making great plays out of nothing. He could make some really boneheaded decisions at times, but he was one of those guys who had an it-factor. He knew how to win football games, and his teammates really responded to him. I don’t think there’s really any question that he improved his draft stock as that year went on.”

Both Bordow and Murphy agree that Plummer’s play at ASU warranted a high draft pick in 1997, but both of them also had their doubts at the time that this would actually be the case due to other factors. Although certainly not small by normal standards, Plummer’s 6-foot-2 frame sat a little lower than what most NFL teams were looking for from the quarterback position at the time, and other questions existed about whether his style of play could translate to the professional level.

“As a teammate and a guy who blocked for him, we were all biased because we understood who he was as an individual,” Murphy said. “I think we were hopeful, but I don’t think any of us really thought that he was going to be a first round draft pick. That was because of what we had heard, and at the time, the prototypical quarterback was 6-3 to 6-6, the Peyton Manning type, and Jake wasn’t that.”

“I thought second or third round,” Bordow said about his expectations for Plummer’s prospects heading into the draft. “He was a really good college player, but there were questions about his size and his arm strength, so I didn’t expect him to be a first round pick.” 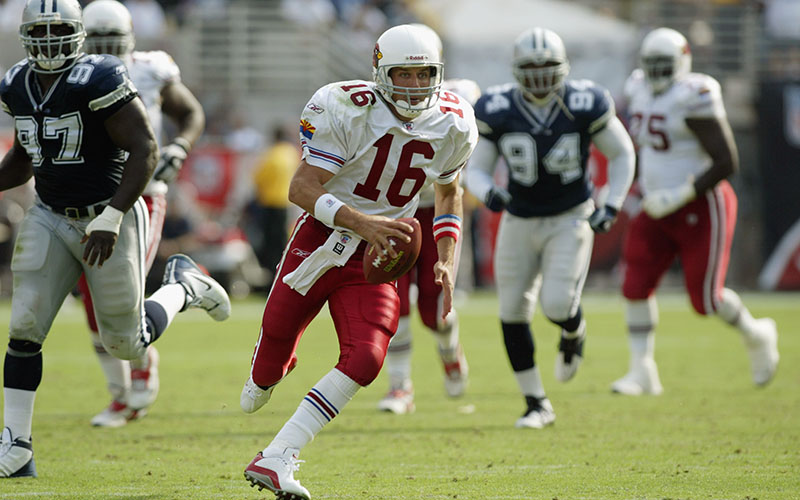 Part of what made quarterback Jake Plummer appealing to the Cardinals was his mobility. (Photo by Todd Warshaw/Getty Images)

At the same place that Plummer made his name in college, however, there appeared to be a match made in heaven for his pro career. The Cardinals had been mired in a 12-year stretch of finishing at .500 or below, and a big reason why was inconsistency at the quarterback position. The team used 15 different starters at the position in that span, and after veteran Boomer Esiason’s departure following the 1996 season, they were once again in the market for a new signal caller.

“We all knew that the Cardinals needed a quarterback,” Bordow said. “They were a quarterback-deficient football team at that point. I remember back in ‘89 they drafted Timm Rosenbach thinking he’d be their quarterback of the future, and then he tore up his knee and he had some personal problems, and that really started a quarterback carousel there that lasted a few years. They had gone through guys like Steve Beuerlein and Gary Hogeboom and all these guys, so they needed a quarterback.

“Whether they were going to draft Jake, I think they had their eye on some quarterbacks, and they saw Jake more than anybody else and probably had a better read on him than anybody else because he played in the same stadium that they did.”

The match made in heaven became a reality on April 19, as the Cardinals pulled the trigger and selected Plummer in the second round with the No. 42 overall pick. The move sent waves throughout Arizona, and as both Bordow and Murphy remember it, football fans in the state couldn’t have been happier.

“They thought he was a god,” Bordow said. “After the ‘96 season when he led them to the Rose Bowl and scored that late touchdown in the Rose Bowl where you thought they were going to win a national championship, Jake Plummer could do no wrong. I’m sure Cardinals fans, they were really excited when the Cardinals drafted him. For us in the media, you take a more cynical look at it and say, ‘All right, he was a great college quarterback, but do those skills translate to the NFL? Can he be a successful pro quarterback?’ But from the fan perspective, they were absolutely over the moon that the Cardinals drafted Jake.”

From Murphy’s perspective, he was excited that his friend was staying so close to the place where he became so successful, but worried that the expectations placed on him would be greater than what they should be for a second-round pick because of his reputation in the state.

“It was a double-edged sword,” Murphy said. “We were happy because he was going to be close to us. We could watch him and see him if we needed to and everything would be easier. However, I think all of us would’ve loved to see him be able to get out of Arizona, where he didn’t have to live up to what he did in college. He was coming off an 11-1 season, the best in 10 years at Arizona State, and yet he was still in the same state.

“I think it was a lot more pressure than had he gone somewhere else, because even in his rookie year, fans knew him. They were clamoring for him to get in and chanting his name and all of that.”

Early in his Cardinals career, however, Plummer didn’t let this pressure stop him from making a good first impression. After being thrust into the starting role during the fourth quarter of the team’s week eight matchup his rookie year, he helped record three of their four total wins on the season. In 1998, he did even better, leading the Cardinals to their first playoff victory in 41 seasons with a win over the higher-seeded Cowboys in that year’s NFC Wild Card round.

The rest of Plummer’s career with the Cardinals was hit or miss, with him seemingly alternating between good and not so good seasons. In Bordow’s eyes, though, the Cardinals were the ideal landing spot for him to start his career.

“You can look at it two ways,” Bordow said. “You can say there was more pressure because everybody in Arizona knew him and knew what to expect from him, but you can also say that he also had more leeway with the fans than any other quarterback. If he goes to some other city where they don’t really appreciate what he did in college and weren’t fans of his college days and he struggles as a rookie, they’re going to be all over him. But in Arizona, he had so much goodwill with the fans that if he didn’t have a good rookie year, they were going to be very forgiving because they all loved Jake for what he did at ASU. I think this was probably a very good place for him to land.”