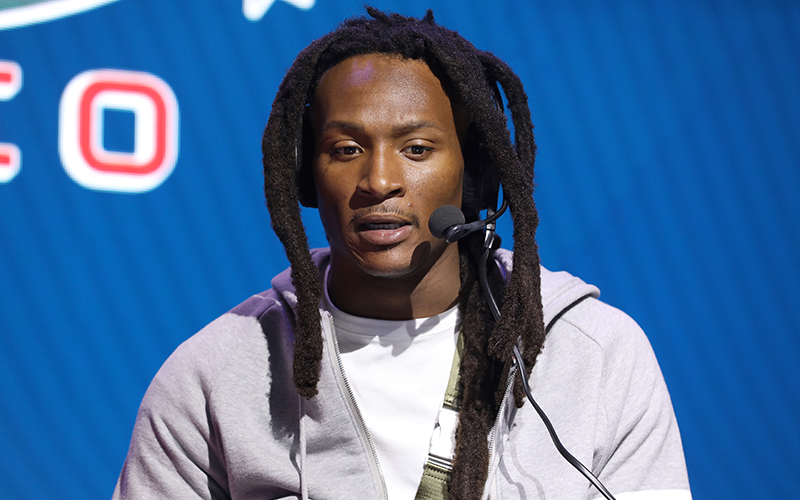 GLENDALE – Newly acquired Arizona Cardinals wide receiver DeAndre Hopkins is already making an impact in the Valley, familiarizing himself with his new teammates and showing leadership through philanthropic work.

Since arriving in Arizona as the centerpiece of an offseason trade with the Houston Texans, Hopkins said the outpouring of support from the Red Sea and his new teammates is overwhelming. He is entering his eighth season in the NFL, but his first with a new team.

“I feel at home even though I haven’t played a snap,” Hopkins said during a conference call Friday following the official completion of the trade made in March. “Those guys in the locker room, you can tell they have a lot of respect for me and it’s the same. All the guys I’ve talked to have a lot of respect for the organization. The young players that reached out to me, I can tell they’re hungry, ready to play and ready to win.”

Along with the Cardinals picking up Hopkins, a three-time reigning All-Pro, the final terms of the trade included Arizona receiving a 2020 fourth-round pick while sending running back David Johnson, a 2020 second-round pick and 2021 fourth-round pick to Houston.

“I heard rumor talks about me being traded last year,” Hopkins said. “It wasn’t a big surprise for me, I was ready for it.”

Hopkins will have to adjust to coach Kliff Kingsbury’s “Air Raid” offense, which ranked in the bottom half of total yards and passing touchdowns last season, according to Pro Football Reference. Durable and prolific, the 27-year-old Hopkins scored 50 touchdowns and accumulated more than 8,500 receiving yards while playing in all but two regular season games with Houston.

Last season, he had 104 catches for 1,165 yards and seven touchdowns. General manager Steve Keim called Hopkins “a game-changer” who, with his physical after-the-catch play and touch on the perimeter, should fit in well with a cast of offensive weapons that includes quarterback Kyler Murray, and wide receivers Larry Fitzgerald and Christian Kirk.

“We’re meeting up together, just Kyler and I. Working out and going over the offense,” Hopkins said. “I don’t think it’s going to be something that will be a big problem because we’re professional athletes. I’ve been in the NFL for seven years, played under two different offenses so I’m familiar with offensive changes. I think it will be pretty smooth.”

Hopkins will be teammates with one of the longest tenured and highly respected players in the NFL in Fitzgerald. The two became friends after Fitzgerald provided advice to Hopkins while he was holding out for a new deal with Houston in 2016.

“It’s been one of those relationships — that I’ve always respected his game,” Hopkins said. “I’ve respected what he’s done outside of football. Probably more so as a person, and who he is and how he carries himself as a businessman. Fitz always has the utmost respect from myself.”

While the four-time Pro Bowler hasn’t made an on-field impact just yet, Hopkins is already giving back to the Valley with a $150,000 contribution to the Arizona Coronavirus Impact Relief Fund.

Although Hopkins said philanthropy and immersing himself in the community has always been important, he witnessed its worth up close by observing the altruistic actions of former Texans wide receiver Andre Johnson. The two played together for two seasons before Johnson left for the Indianapolis Colts via free agency.

“That’s always been a mission of mine and my family, to give back and make sure we’re helping the community that is supporting us and allowing us to play there,” Hopkins said. “Once I got to the NFL I saw Andre Johnson and the things he was doing for the community of Houston. Having a toy drive every Christmas and being a presence in the community. That was enough for me to see a true leader, and a person that cares about more than football.”

With the trade behind him, Hopkins said he plans to do “everything I can to catch up with the team” once the Cardinals begin voluntary workouts. With a new home, a new offensive scheme and a new reality navigating virtual workouts with new teammates, he still has his eyes on one prize — the coveted Lombardi Trophy.