PRESCOTT – The Verde River, one of the few perennial rivers in Arizona, is known for its fishing and recreation, but it also provides water to Prescott and metro Phoenix.

The more than 170-mile long river flows from its headwaters near Flagstaff south to the Salt River. Along the way, the Verde supplies water to the Little Chino Aquifer, from which Prescott draws its water. With a growing population and new housing developments coming to Prescott, this water faces increasing demand that could threaten the river itself.

That’s something Gary Beverly, who has lived in Yavapai County for almost 50 years, has witnessed many times.

“(The Verde River) is the longest surviving river in the state of Arizona,” Beverly said. “Out of six perennial rivers, this is the only one that’s still in good ecological condition, and we are positioned to lose it if we don’t change the way we handle our groundwater management.”

The Prescott City Council is responding to a growing population and new housing developments by proposing a new water policy to provide water for the city’s population of 43,314 and its future residents. The new policy proposal calls for an increase in the city’s withdrawal from the Little Chino Aquifer to supply thousands of acre-feet of water a year to the homes.

Average water levels in the Verde River could drop if the Prescott City Council votes to draw more groundwater from the Little Chino Aquifer, which is supported by the river. (Photo by Christopher Howley/Cronkite News)

“People are going to move here,” Mayor Pro Tem Billie Orr said. “They’re going to move out in the county. We know that they’re coming. So we just need to grow … and manage (the increase), not let it be just crazy out there in chaos. So that’s our purpose” for the proposed policy change.

Housing developers are looking to build just north of downtown. The city predicts that 10,000 to 15,000 housing units could be annexed over the next few decades. The developments would turn to the city for water resources.

“Water resources are an interesting topic because we have a legal right to water and it’s debated as to how much…so water controls growth,” said Jason Gisi, CEO of Arizona Eco Development, one of the companies planning to build in Prescott.

Although the city and the developers support the change, some conservationists are worried an increased focus on development and groundwater pumping will cause more of the Verde River’s average flow to decline.

“Every bit of water that we draw out of the Little Chino Aquifer to feed growth in the Prescott area is a drop of water that isn’t going into the Verde River,” said Joe Trudeau, the Southwest conservation advocate for the Center for Biological Diversity in Tucson. “Expanding the city’s impact, potentially to tens of thousands of acres to the north, is all those more straws that are being pumped out of the Verde River.” 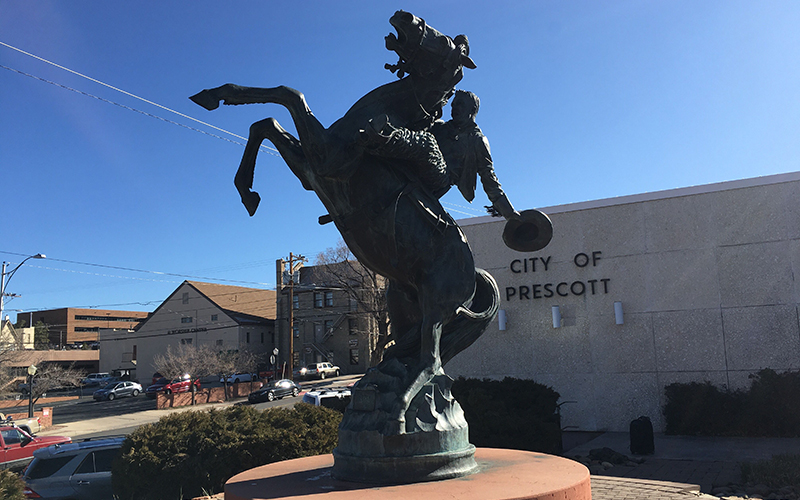 The Prescott City Council has proposed a new policy that would provide water to its growing population and future housing developments. (Photo by Christopher Howley/ Cronkite News)

Conservationists already are concerned about the river’s average flow, which has decreased over time.

Since 1986, Prescott has relied on those recharge mechanisms to replenish the Verde River and store a certain amount of its unused water underground for later use.

The city transfers treated wastewater below ground that’s adjacent to water tables. The Arizona Department of Water Resources carefully quantifies the amount of treated water that is recharged into the Little Chino Aquifer.

Beverly, who also is president of the Citizens Water Advocacy Group, said he has seen the groundwater reserve and the Verde River decrease far too much in his lifetime.

“Arizona’s other perennial rivers are dried up,” he said. “It (the Verde River) is unique. This is the last one we have left and we just cannot lose this. You don’t have to take it all.”

This isn’t the first time Prescott has dealt with debates surrounding water conservation. The city has been vocal about decreasing its annual water usage, Orr said.

“We have been talking about water issues for the past, I would say, decades in the city of Prescott,” she said. “We are actually using less water today than we did 14 years ago.”

As multiple sides continue to plead their cases, the City Council hoped to vote this summer, but city officials say the COVID-19 pandemic may push that decision back until later in the year.

“Water is political on one hand and some folks would say it’s the basis of life on the other hand,” Gisi said. “We are striving for balance where you have some of both.”