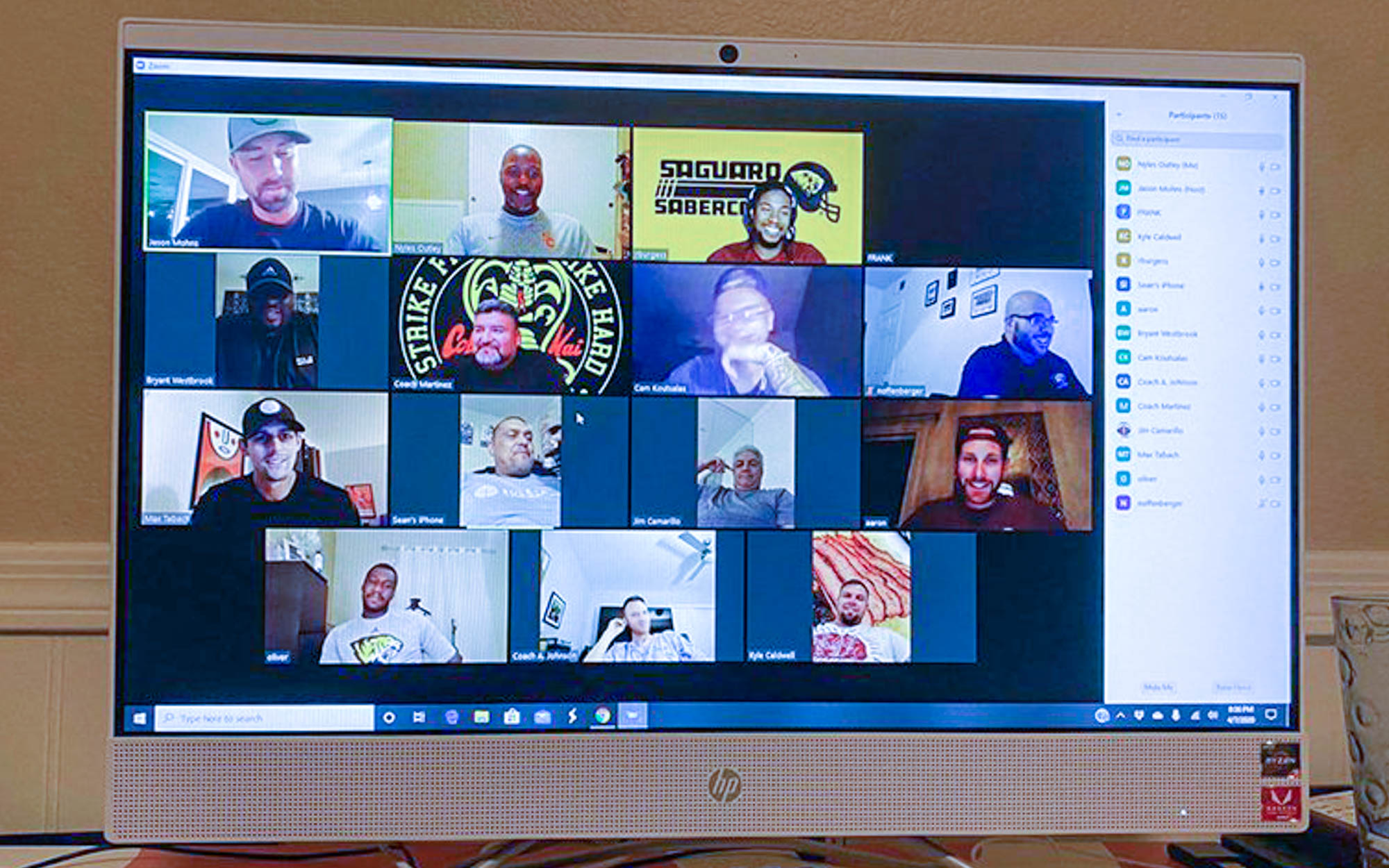 Jason Mohns, the football coach at Scottsdale Saguaro High School, routinely meets with his staff and players via Zoom. It’s one way that coaches turned creative to maintain their spring programs. (Photo courtesy of Jason Mohns)

PHOENIX – Zoom meetings, online film sessions and remote workouts. Those are just some of the creative solutions that high school football coaches are employing to conduct spring practices in the wake of the coronavirus pandemic.

Spring football is typically a three-week session. It is, as three Arizona coaches noted, a crucial part of the offseason. It effectively knocks the rust off players’ cleats, while affording players and coaches a chance to familiarize themselves with the playbook.

The work teams log in the spring often correlates with success in the fall, but with the suspension of school and athletics, coaches have conjured up new ways to produce those desired results.

“We’re doing it through Zoom,” Scottsdale Saguaro coach Jason Mohns said. “It’s going to be a typical practice install where you’re putting in your offense and your defense, but we’re going to do that virtually.”

The Arizona Interscholastic Association (AIA) announced the cancellation of the spring sports season on March 30, in compliance with Governor Doug Ducey’s order that included “all school-sponsored extracurricular sports and activities.”

Like other coaches, Mohns was forced to pivot from schedules that had been laid out for months. Although no in-person instruction is permitted, there’s still plenty of coaching to be done – even if it’s not on the sidelines.

“There are still plenty of ways for us to get better,” he said. “It just looks different than it usually does. We can still take advantage of that time.”

Mohns has bi-weekly meetings with his quarterbacks where they’ll dissect film and talk schemes and coverages. It’s a makeshift quarterback room, like one they’d normally have, only connected by Zoom while everyone is confined to their own homes.

Joseph Ortiz, the coach at Glendale Cactus, had the entire spring and summer mapped out. The Cobras were scheduled to begin official workouts in late April. He had 7-on-7 passing tournaments planned, and a summer camp and workouts that would have spilled into late July.

Ortiz is still hopeful that teams will be cleared by health and government officials to resume practice in June or July, but for now, he issues three home workouts every week for his players, and he video-chats with his coaching staff daily. The show must go on.

“Not being able to have a spring ball, that’s three weeks less than we would have on the field for practice,” Ortiz said. “That’s the concern.”

Mohns and Ortiz have been at their schools now for nine years and three years, respectively. Spring football workouts evolve from year to year, so they normally use this time to touch up their playbooks, implement new coverages and add new schemes. The practices they were scheduled to run would have mirrored those changes.

“We’re not in pads, but we can still get on the field and install and teach and learn,” Mohns said.

First-year coaches were also banking on the spring season to develop relationships with players, install a playbook and build a culture.

Jose Lucero, entering his first year as St. Mary’s coach, said he feels constrained by doing it all virtually.

“We’re coming in, bringing in a brand new system, brand new offense, brand new defense, setting expectations, building the culture,” he said. “This was going to be a really important spring for us in regard to all that and, most importantly, for our players and coaches to continue to develop those important relationships.”

Lucero is a St. Mary’s alumnus, returning to his alma mater after a successful multi-year term as Goodyear Desert Edge’s coach. The Scorpions went 36-15 in four years under Lucero, capped by a run to the 4A conference state championship game last fall.

His inaugural spring season at St. Mary’s begins under unprecedented circumstances, but his task remains the same: slowly introduce the new offense and defense that he’ll run when play resumes.

“I figured out how to record myself giving a presentation and doing a voiceover and I upload the videos online,” he said with a laugh. “We try to have conversations about those things. I have the kids ask questions. That’s the route we’ve gone so far.”

All three coaches agreed that as much as they’re trying to mimic a regular spring program, they must do so cautiously, worrying that too much information may overwhelm players or pull them from their schoolwork.

“They had to make a transition to online school,” Mohns said, “That was a little bit of a learning curve and a transition for them. That was one thing we talked about with our coaches: ‘Let’s not overwhelm our players early in this process. Let them settle in, make sure they’re focusing on their schoolwork first.’”

The coaches also acknowledged that in the midst of a public health crisis, football is secondary. The health of everyone in their program, the sport and the community is paramount.

This learn-as-you-go virtual spring ball is an experiment, where all parties involved are still trying to find their footing. They hope there will be a time, sooner rather than later, when stadium lights come on again and football will be played across the state on Friday nights. When that time arrives, it will mean more than just the return of football.

“When we’re finally able to be with each other again,” Ortiz said, “it’ll just make it that much better.”

“I just think when we do come back,” Mohns said, “it’s going to be great, kind of like a little family reunion. I think it’ll just give players a different perspective of how important the team is, and how fragile everything is in life.”

“I’m just excited to get back out on the field and coach football,” Lucero added. “I welcome being out there in the 110 degree days, whatever the case may be. It’s just going to be exciting being back out there and coaching and working with kids.”