Taylor Pyatt (center) of the Coyotes is congratulated by his teammates after scoring a goal against the Minnesota Wild in a game that clinched the Pacific Division. (Photo by Bruce Kluckhohn/NHLI via Getty Images) 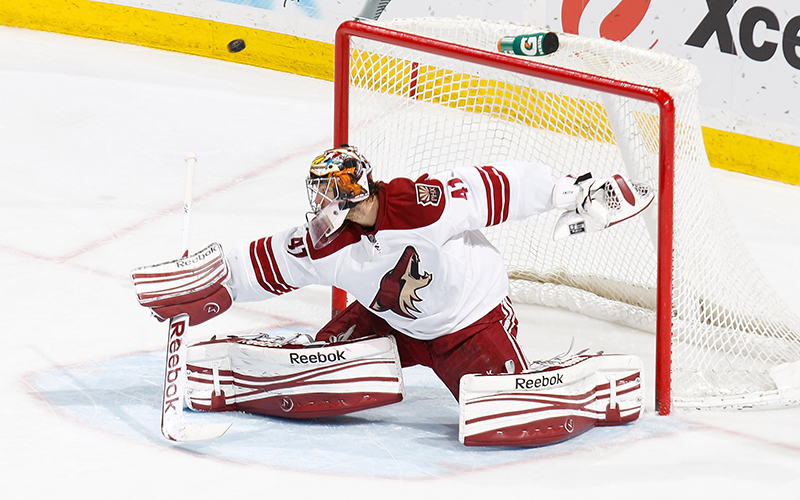 Goaltender Mike Smith was a key figure when the Coyotes clinched the Pacific Division title on April 7, 2012, as well as throughout the season. (Photo by Bruce Kluckhohn/NHLI via Getty Images)

PHOENIX – The Phoenix Coyotes faced a lot of obstacles during the 2011-12 NHL season. The biggest ones were off the ice.

Despite back-to-back playoff appearances the previous two seasons, the team’s future in the Valley was in doubt. Two potential ownership deals had fallen through. With no new arena lease in place, and still no viable owner, it took a $25 million payment from the City of Glendale, where the franchise had moved from its original downtown Phoenix home, to help prevent the NHL from moving the team before the season.

One of the few concerns for the team on the ice was that the Coyotes lacked a so-called “superstar.” Thanks in part to the offseason acquisition of goaltender Mike Smith, the Coyotes set the turmoil aside and enjoyed what remains the best postseason the franchise has produced in Arizona. On April 7, 2012, the Coyotes skated past the Minnesota Wild, 4-1, to capture their first Pacific Division title.

Smith was the catalyst, and he went on a hot streak during a Coyotes playoff run that carried the team all the way to the Western Conference Final before it fell to the eventual Stanley Cup champion Los Angeles Kings.

“Goaltending is probably one of the truest indicators of a team’s success, and the way that he was locked in, it made sense the team would get on a run like it did,” said Sarah McLellan, who covered the Coyotes beat for The Arizona Republic at the time, and now covers the Minnesota Wild for the Star Tribune in Minneapolis.

The defense-first culture of coach Dave Tippett needed a mobile goaltender with the ability to play the puck outside of the crease, and Smith was a perfect fit.

“He came in and just kind of brought that stability,” McLellan said. “I think that was key for the entire team, since that was kind of the foundation for the way this team would play.”

Smith was nearly impenetrable during a five-game Phoenix winning streak to finish the regular season, turning away all but two of the 192 shots he faced in the streak. His third consecutive shutout featured 54 saves against the Columbus Blue Jackets in Glendale on April 3. It was the NHL record at the time for the most saves in a regulation-length regular-season game, and it gave the Coyotes momentum heading into their final road trip of the season.

“Mike Smith was the main reason all of that stuff happened,” then-left winger Ray Whitney said. “He was truly amazing the second half of that season.”

While the Coyotes were clicking, the San Jose Sharks and Kings were also in contention for the Pacific title. With two games to go, the Kings and Coyotes had 93 points and San Jose had 92.

“I think that jostling ultimately helped them because they had to kind of be on their toes every night and stay competitive,” McLellan said of the Coyotes. “You couldn’t really fall back, and you couldn’t lose a couple games in a row.”

The Sharks and Kings played each other in their final two games while the Coyotes traveled to St. Louis to face the eventual Central Division champion St. Louis Blues, and then on to Minnesota to close out the regular season.

Smith was sharp again, and the Coyotes beat the Blues, 4-1.

“Everything just felt tight and crisp,” McLellan said.”I just remember everything just seemed like it was lockstep and that it was preparing for something bigger.”

The Sharks beat the Kings in a shootout in their first meeting, and were set to play again on April 7. The Coyotes faced a must-win situation in Minnesota to clinch their first Pacific Division title.

“Going into the game in Minnesota, we had the attitude that although we were in the playoffs and played very well to do that in the prior two months, we felt that winning the division was a tremendous accomplishment and one that we took seriously,” Whitney said. “Glad it worked out.”

The Coyotes took a 2-0 lead in the first period, but the Wild’s Dany Heatley made it a one-goal game when he deflected the puck off of Smith and into the net. The Coyotes were no strangers to close games. Of their 82 games that season, 39 were decided by one goal.

This one wasn’t close for long. With 5:36 left in the period, left winger Taylor Pyatt made it 3-1, beating Niklas Backstrom with a wraparound goal.

“When Taylor scored in the second, we didn’t really know it was going to be the winner with so much time still to be played,” Whitney said. “We probably should have thought that with how well Mike Smith had been playing the last two months. We were just focused on getting through the period and taking care of business in the third period.” 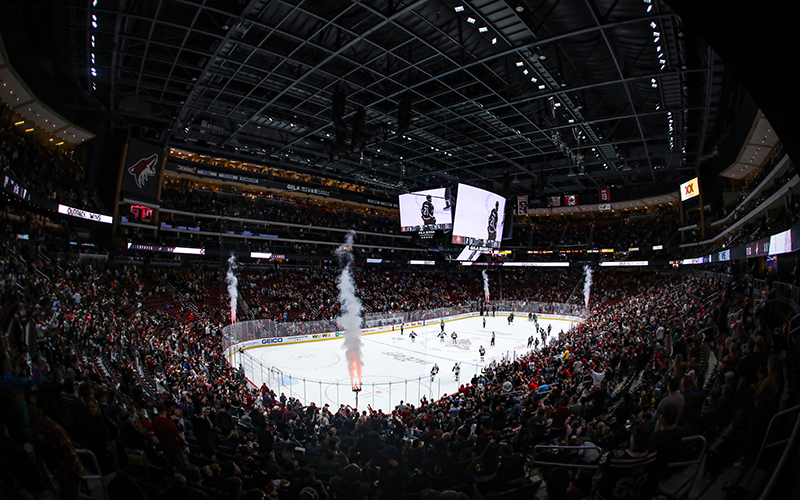 Vrbata, Whitney and Martin Hanzal made up a formidable top line for the Coyotes.

Whitney, a great passer with great vision, “just found ways to create offense,” McLellan said. Vrbata was the “finisher” with an impressive shot who could find open pockets, leading to a team-high 35 goals. Hanzal, a 6-6 center, created space for his linemates with work along the boards, hard drives to the net and net-front presence.

“He was almost like a human decoy because I think the defensemen on the other teams had to pay attention to him with his size, and how tough it was to pry the puck off him, that it really opened up options for Ray Whitney and Radim Vrbata,” McLellan said.

Whitney called Hanzal “one of the biggest and strongest centermen in the league” and attributed his proficiency in the face off circle as a reason for the line’s success.

The three combined for 173 points that season, with Whitney’s 77 leading the team.

“They obviously had had strong careers to that point, but put them together and they just took off even more and were even more impressive for what they did,” McLellan said.

The team held its lead and San Jose beat the Kings in overtime to give the Coyotes a one-point edge over San Jose and two over the Kings. The Coyotes have never been better than they were that season.

“It was just nice to be around a team that was close and believed in each other,” said Rich Nairn, executive vice president of communications and broadcasting for the Coyotes. “It was so great to finally win a division championship. The players and staff were very excited about the playoffs and felt they could go a long way.”

The Coyotes defeated the Chicago Blackhawks (with stars Patrick Kane and Jonathan Toews) in six games. Smith made 39 saves in a 4-0 shutout that closed out the series and set aside the bugaboo of first-round exits for Phoenix the previous two seasons.

The Coyotes kept rolling, defeating the Nashville Predators in five games in the second round before running into the Kings. The Coyotes fell in five games but that 2012 run remains the deepest the franchise has gone in the postseason.

To put that in perspective, current Coyotes captain Oliver Ekman-Larsson, who was a 20-year old in his first full NHL season in 2011-12, is the only remaining player from that memorable season.

“Every young player needs that experience,” McLellan said. “The games were so important and the stakes were high, and to go on a playoff run like that, I think that was probably really key for him.”

For a franchise in turmoil in 2011-12, that Pacific Division-championship experience was something all the Coyotes and their followers needed.