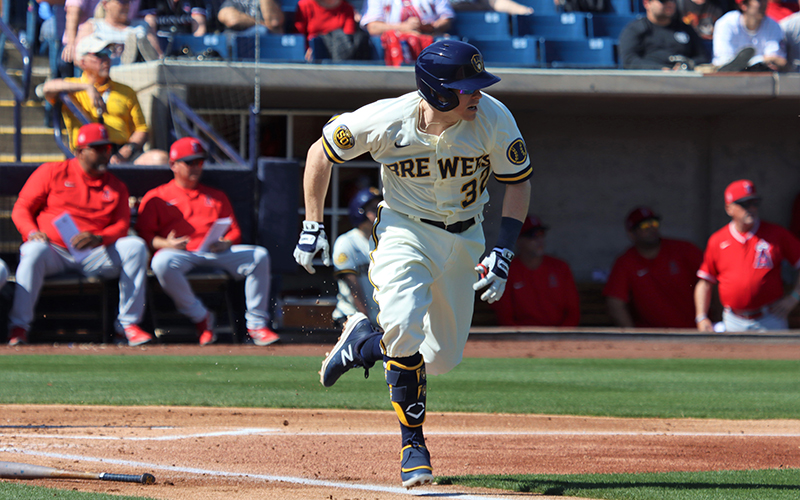 Milwaukee Brewers infielder Brock Holt hails from Texas but many MLB players come from other parts of the world. “Having everybody come in from different states and countries,” could provide challenges, sportswriter Bob Nightengale said. (Photo by Reno Del Toro/Cronkite News) 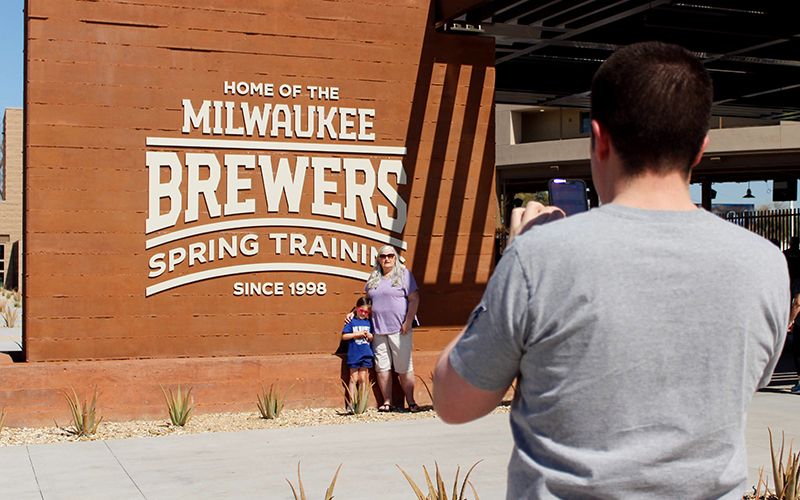 American Family Fields of Phoenix, where the Brewers play their spring training games, could be the home of Major League Baseball games. (Photo by Reno Del Toro/Cronkite News) 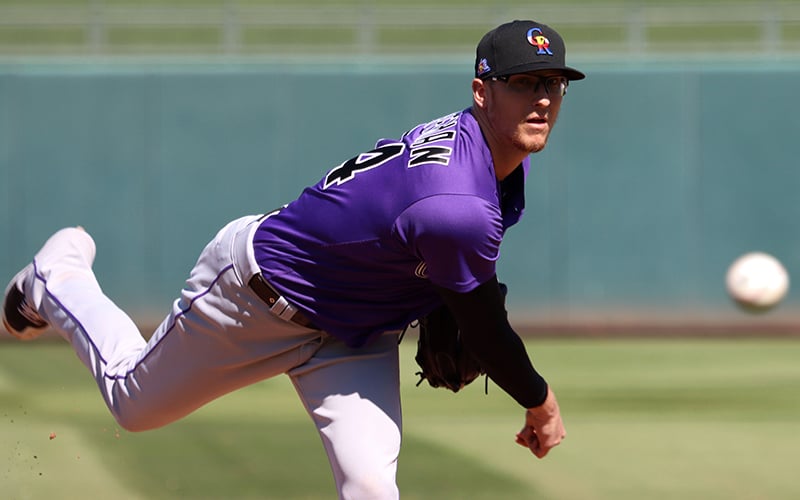 If Major League Baseball follows through on an idea it is considering, Colorado Rockies pitcher Jeff Hoffman could be playing at one of Arizona’s spring training stadiums soon. (Photo by Reno Del Toro/Cronkite News)

PHOENIX – Nearly a month has passed since the COVID-19 pandemic brought the sports world to a halt. Every active league postponed or canceled seasons, including Major League Baseball.

But MLB is working on a plan to reboot the sport in a move that will be judged bold or foolish, depending on how it unfolds.

Monday evening, ESPN’s Jeff Passan reported that baseball is discussing a plan to begin the 2020 season in May with all 30 teams living and playing in Arizona.

If approved, the league would reportedly use Chase Field, the home of the Arizona Diamondbacks, along with the Valley’s 10 spring training facilities. Fans would not be allowed to attend games, but they would be televised.

“MLB has been actively considering numerous contingency plans that would allow play to commence once the public health situation has improved to the point that it is safe to do so,” the statement said. “While we have discussed the idea of staging games at one location as one potential option, we have not settled on that option or developed a detailed plan.”

Sports fans are longing for the resumption of live games and events, but some members of the baseball community see the plan as flawed in several ways.

Perhaps most important: It’s a health concern. According to the Arizona Department of Health Services, the state on Tuesday had recorded 2,575 coronavirus cases – 1,494 of which were in Maricopa County, where all the games would be played.

With still so much unknown about the virus and its spread, Zach Buchanan, who covers the Arizona Diamondbacks for The Athletic, believes the idea is too risky from a health perspective.

“Can you guarantee that every player that takes the field is not carrying the virus? Not without really widespread testing, which we don’t have right now,” Buchanan said. “There’s just a lot of different ways this can fall apart, so I don’t think it’s really a plan that makes a lot of sense.”

USA Today baseball columnist Bob Nightengale said he thinks having hundreds of MLB personnel coming from different areas to one location could create more issues. Players came from 48 of 50 states and from 23 other countries last season, according to Baseball Almanac.

“A problem is having everybody come in from different states and countries and thinking that everybody is going to be isolated,” Nightengale said. “And nobody testing positive is a real stretch. People are saying, ‘Wait a minute, it’s going way too fast; let’s just take our time.'”

Additionally, health concerns surround where the players would be housed. With players likely to be based in Valley hotels, it could create worry for the owners of the properties, including Jon Erickson, who is the director of sales and marketing at Sheraton Downtown Phoenix.

“Our first concern is the safety and health of our staff and guests,” Erickson said. “This doesn’t affect us until it’s made official and at that time we’ll decide what’s best for the safety of our staff here at our hotel.”

Buchanan and Nightengale share other doubts about the plan. There are plenty of concerns regarding the financial side of playing all the games in Arizona. The Major League Players Association will have to sign off on the idea, which could cost its players money.

“They’re not going to be getting their major-league salaries because there are no fans at the games, so would they want to take a pay cut to also not see their families? I doubt it,” Buchanan said.

Nightengale added, “If there’s no fans in the stands, the owners say that’s a third of the profit, so who’s going to pay for that? They also don’t have the naming rights or the stadium advertising. If you’re the New York Mets and you’re playing at Chase Field, it doesn’t do you any good because it doesn’t say Citi Field.”

Arizona’s heat is another issue to consider. The average high temperature in Phoenix during June is 104 degrees, according to the National Weather Service. The average high spikes to 107 degrees in July. It is likely that games would have to be played early in the morning or in the evening to avoid the sweltering heat and also accommodate television viewers in the east.

And with only 11 ballparks including Chase Field and the Cactus League facilities, MLB will need to be creative to find other stadium options. Some possibilities could include using local college facilities, such as Arizona State’s Phoenix Municipal Stadium, Grand Canyon University’s GCU Ballpark, or Packard Stadium, the former home of ASU baseball.

If all of these facilities were available, plus if Chase Field were able to host doubleheaders, every MLB team could play a game on any given day.

But this is all hypothetical. And if Buchanan had to predict, the talks will evaporate quickly.

“I doubt we’ll hear much about it going forward,” Buchanan said. “They’re at the drawing board trying to come up with ways to do it and kick ideas around, and that’s fine. But I doubt that we’ll be seeing baseball in this form.”