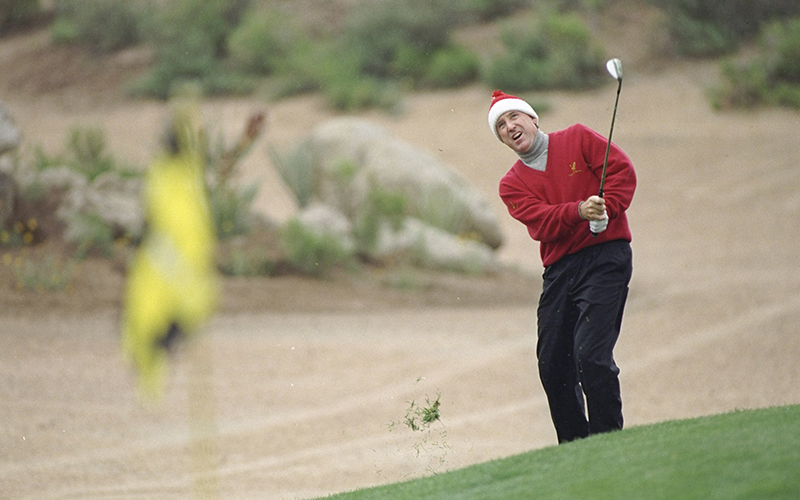 In 1997, Gil Morgan ran away with a victory despite adverse weather at the Tradition tournament in Scottsdale, his first time winning a golf major at any level, and the first of three Champion Tour majors. (Photo by Craig Jones/Allsport)

PHOENIX – Gil Morgan made a name for himself on the PGA Tour, winning seven tournaments in a career that spanned more than two decades. He owns the distinction of becoming the first person in U.S. Open history to reach 10 under par at any point during the tournament (he accomplished this in 1992).

Despite those achievements, he had always fallen under a dreaded classification of golfers who never won one of the four majors on the tour. He came close on several occasions, most notably in that ‘92 U.S. Open.

“I had a couple opportunities to win majors on the regular tour and failed,” Morgan said.

On the Champions Tour (for PGA golfers 50 and older) Morgan finally captured a major, winning The Tradition on the Cochise Course at the Golf Club at Desert Mountain in Scottsdale on April 6, 1997. It was the first of three senior tour majors he won, and came barely six months after his 50th birthday.

“It was nice to be able to win those, put those on my résumé, basically,” Morgan said. “My game was in pretty good shape, but the golf course kind of fit my eye, I guess. It was a course I played well, a couple times in a row at least, but I enjoyed playing that golf course.”

Gary Van Sickle has covered pro golf since 1980, and was reporting on the event in 1997 for Sports Illustrated. He recalls the adverse conditions that players encountered, noting the effect it had on the tournament atmosphere.

“I remember it being terrible weather,” Van Sickle said. “It’s one thing to play in crummy weather when you’re a young buck. When you’re an old guy and you’re kind of playing for fun, you’re playing for the thrill of competing, that’s not what you want.

“Snow flurries on Wednesday and (temperatures) in the low 40s. Any golfer will tell you cold and wet is the worst thing. You can have gloves to keep your hands warm, but if your gloves get wet, now your fingers are wet and it’s cold. Your fingers get numb.”

While the weather may have had an adverse effect on older golfers such as Jack Nicklaus and Lee Trevino, who both finished the tournament at 1-over-par, Morgan was about as young as could be for senior tour players, and it showed in those conditions. The Wewoka, Oklahoma, native finished 22 under for the tournament, never surrendering his spot atop the leaderboard after the second round and finishing six strokes ahead of the runner-up.

As Shawn Emerson, the course’s director of agronomy since 1996, recalls, Morgan had a different tone and demeanor about him throughout the week.

“He had one of the best golf swings,” Emerson said. “All the rest (of the players) were like, ‘Oh, it’s cold,’ or ‘Oh, this,’ and complaining, and he just went out there and methodically kept going.
He wanted to shoot the lowest score each day, that was his main focus. ‘If I shoot the lowest score today, you can’t beat me’ was kind of what he talked about.”

Such a dominating performance raises the “chicken-or-egg” question. Was he fine with the weather because he was playing so well, or did he play well because of his attitude? Emerson, whose job is to oversee the course conditions, believes it was the latter.

Van Sickle knew Morgan as someone who took the right approach to any given situation. In addition to Morgan always being a patient and considerate presence for the media, Van Sickle recalls another aspect of Morgan’s character from covering the British Open in 1994.

“Below this huge resort (where players and media stayed), they had sort of a pitch-and-putt course,” Van Sickle said. “A couple of us media guys were allowed to go out there. Gil Morgan and his daughter are out there, and he saw us and we waved and said, ‘Hi.’ He watched one of our guys blade it over the green. He just laughed.

“If it had been somebody else, he might have pretended he didn’t see us and ignored us. Gil would not do that.”

Morgan’s victory at The Tradition sparked a run on the Champions tour that was long and successful. He won two more senior majors by the end of 1998 and finished with 25 senior tour victories.

Morgan’s golf career is nearly over. At 73, he has not played more than two events in a season since 2016. In addition to more than $20 million in career earnings, he can finally say he’s won that elusive major, thanks to that cold, wet day, 23 years ago on that mountain course in Scottsdale.