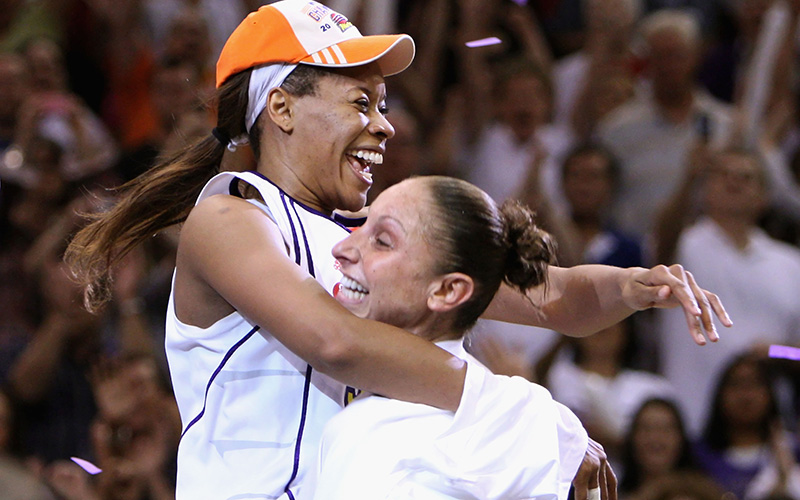 Tangela Smith (left), here with Diana Taurasi, helped the Mercury win their first title after being traded to the team 13 years ago. (Photo by Christian Petersen/Getty Images)

PHOENIX – The Phoenix Mercury beat the odds in the WNBA draft lottery following the 2006 season, emerging with the No. 1 overall selection despite having the best record among the six teams in the lottery that year.

But on draft day, April 4, 2007, the Mercury traded the top pick to the Minnesota Lynx in exchange for veteran center/forward Tangela Smith, who had just gone to Minnesota via a dispersal draft when the Charlotte Sting folded in January.

That bold decision by the Mercury would pay off immediately for the franchise, which won its first WNBA title in Smith’s first season in Phoenix.

“It was all a shock to me at first but I was super excited at the same time,” Smith said. “It was very unknown to trade your No.1 pick, and I was like ‘Oh my God, they traded their number one pick for me.”

When Smith arrived in Phoenix she joined an already talented Mercury team, with a roster that included a backcourt of WNBA All-Stars Diana Tauras and Cappie Pondexter.

But Smith wasn’t phased by the challenge of proving herself worthy of such a blockbuster trade.

“I don’t know if it was pressure, but I know we had a lot of great players, and I didn’t have to do it alone,” Smith said. “It was a good group of really good players, and I’m glad I didn’t come in and put the team on my back.”

During the 2007 season, the 6-foot-3 Smith averaged 12.6 points and 6.5 rebounds and helped the Mercury finish with the best record in the WNBA’s Western Conference, and defeated the team with the league’s best record, the Detroit Shock, 3-2, in the five-game WNBA Finals.

And Smith and the Mercury didn’t stop there. After missing the playoffs in 2008, the Mercury returned to the WNBA Finals in 2009 and defeated the Indiana Fever, again 3-2, to win another championship. Smith averaged 9.9 points and 5.4 rebounds that season.

After playing four seasons with the Mercury, Smith spent a season each playing for the Fever and the San Antonio Silver Stars before leaving the game.

Now, Smith uses what she learned throughout a 15-year career in the WNBA to help her players and elevate the Northwestern women’s basketball program, which went 26-4 during the 2019-2020 season.

“It’s shown me what I need to do to teach the players that I come in contact with every day,” Smith said. “The things I learned from my coaches I can put into my students athletes – like commitment, hard work, and being passionate about the game.”

Looking back on her time in Phoenix, Smith will always remember the devotion from the Mercury’s fans, known as “The X Factor.”

“They are the best fans in the whole wide world,” Smith said. “I love the Mercury fans. They are just so supportive of us, come out to every game. Win or lose they were always there. The community was great, and it was my favorite place playing in the WNBA.

“I miss them, but I don’t like the hot weather.”