PHOENIX – March 12 was an odd day for many people, including Arizona Coyotes broadcaster Matt McConnell.

The NHL had canceled morning skates, but the Coyotes were still slated to take on the Vancouver Canucks that night at Gila River Arena. McConnell met with his broadcast partner, Tyson Nash, and producer Graham Taylor at a Starbucks in Desert Ridge Marketplace to discuss the game plan, but it was becoming evident that they may not need one.

That has become a reality for Arizona’s top broadcasters, including the Suns’ John Bloom and the Diamondbacks’ Greg Schulte, who are dealing with a world without sports because of the COVID-19 outbreak.

“We laughed about having the meeting but we went through it as part of preparation,” said McConnell, who handles television play-by-play for FOX Sports Arizona. “About an hour and a half afterwards, we found out that the league was on hiatus.”

At 1:36 pm Pacific time, the NHL announced a pause in the season due to the coronavirus outbreak. McConnell figured it was coming, but the news still “hit like a ton of bricks.”

“Early on with the virus, you always have in the back of your mind it’ll get contained, we’ll be able to go on like normal,” McConnell said. “For me it was like, ‘Okay, this is the right decision.’ At that point I realized it was a forgone conclusion.”

The closure of arenas and the postponement of games has touched a vast majority of American society. For most, it means that fans cannot watch their teams unless stations play older games, simulated games or they find some on YouTube.

For many others, including vendors, security guards and broadcasters, their ways of life have been altered dramatically. They can’t go to work.

For Suns broadcaster Bloom, it has derailed an opportunity for which he has worked his entire life. This was the first season in which Bloom was scheduled to call a series of Suns games on the radio. Al McCoy has held that role since 1972, but at age 86, McCoy and the Suns’ plan decided he would not do all 82 games.

Bloom has worked for the Suns as a host since 2008, and he had calling Northern Arizona Suns games for three years. His last game in his dream gig came when the Suns traveled to Portland on March 10, two days before the NBA postponed its season.

“I’ve been broadcasting for 20 years and it felt like this was what I was working towards,” Bloom said. “I really hope we can resume.”

To get out of the house, he took a drive around downtown Phoenix. Driving past Talking Stick Resort Arena and seeing the area empty of people was shocking, although he saw the signs that this was coming.

His wife is an immigration attorney and was closely monitoring the situation in other countries.

“I had heard all the warning signs, but never thought it would be like this,” he said.

Bloom also drove past an empty Chase Field, with no opening day banners or advertisements in sight. 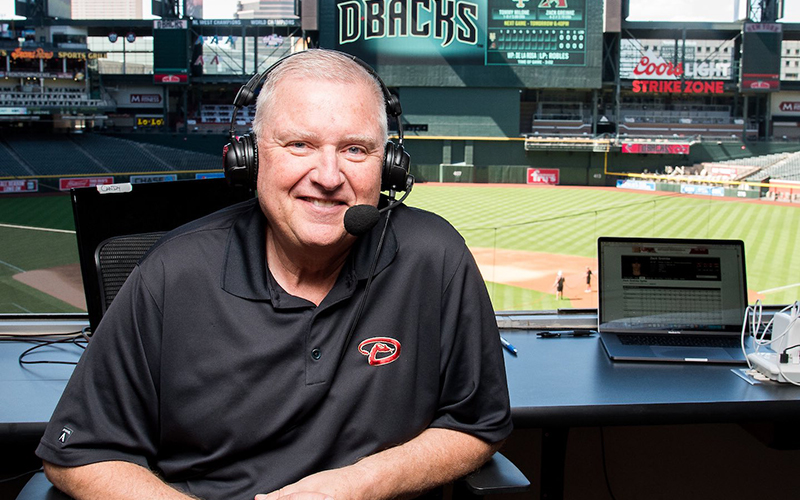 Although Diamondbacks broadcaster Greg Schulte misses baseball, he said, “We’re dealing with a bigger battle than what we get nightly on the ball field.” (Photo courtesy of Arizona Diamondbacks)

“Here I am, three days before what was the Diamondbacks’ scheduled opening day on March 26 against the Atlanta Braves at Chase Field, and no baseball to broadcast on the radio,” D-backs radio play-by-play Schulte said recently. “Right now, we’re dealing with a bigger battle than what we get nightly on the ball field.”

At least McConnell and Bloom are still able to call games, in a sense.

On March 20, the Coyotes posted on their social outlets a virtual simulation run on EA Sports’ NHL 20 video game. It was the Coyotes against Detroit, the game that was supposed to happen that night in the Valley.

Over a Zoom call, McConnell was able to do play-by-play for the game, and then the producers matched his audio with the visuals. The social team posted it and it has just under 12,000 views on YouTube.

“That was interesting throwing it together from a technical standpoint because we’re all spread out,” he said. “The Coyotes put it together pretty quickly. I think it’s a way to stay connected with fans, have fun and get some familiar voices back out there.

“After the first one we did, the response was overwhelmingly positive. We’re just trying to stay engaged with fans; take their minds off of what’s going on in the world.”

Bloom got to call a game of NBA 2K20 between the Suns and the Philadelphia 76ers on Arizona Sports 98.7 FM on March 27.

“I’ve been playing video games since I was a little kid so it all comes full circle,” he said. “I’ve never thought I’d be broadcasting one on the radio but I’ve had practice. I remember as a kid trying to call the action while playing it.”

That is all broadcasters can do right now: either find ways to connect with fans through these sorts of events, or take the Joe Buck approach and provide play-by-play for videos that fans submit. 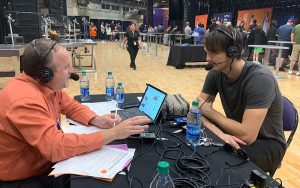 This season, Jon Bloom (left), interviewing Dario Saric, was scheduled to call a series of Suns games on the radio. (Photo courtesy of Ed Cole)

Bloom has an idea that he’s trying to figure out. He wants to connect the Suns fan base through song. He reached out on Twitter, trying to find fans who can “carry a tune.” He wants to put together a performance of a song in which different fans sing different lines, similar to how a group of celebrities sang the song “Imagine” on Twitter.

Other than those projects, the three broadcasters are finding ways to get through each day. Bloom plays music with his family. McConnell likes to watch NHL Network’s showing of older Stanley Cup Playoff games like the 1970s battles between Boston and Montreal.

All three are aching to return to the booth, but they understand the more important fight that is being waged.

“We’re all in this together, all around the world,” Schulte said. “All on the same team. When we finally beat this virus, baseball will help America heal again, just as it did in 2001 with one of the greatest World Series ever played.

“Until then, we wait. Better days are ahead, and I long for that first day I walk into the broadcast booth, pull up my chair and settle in to broadcast Diamondbacks baseball on the radio.”